Today I had an appointment for breast expansion and a separate appointment with my Radiation Oncologist now that Gus the drain is gone. I had a little fluid build up that decided to start Monday afternoon after I had been working all day. Ok, maybe a bit more than a little bit, so I worked from home Tuesday. Monday was the only day I didn’t keep things a bit contracted and wrapped up, from my previous experience of fluid retention in February I learned that a little compression (very loosely wrapped bandage) can really offer relief. The nurse felt like I should hopefully be able to reabsorb the fluid and thought that the fact that it took me 4 days to get fluid build up was good (remember, I have a tendency to be fluidy). You would think this wouldn’t be an issue over 4 1/2 weeks after surgery, but I am a miraculously bad patient I have decided.

I showed up for my radiation appointment figuring my radiation oncologist wanted to say “hi” after she had suggested that I start radiation 3 weeks after I finished chemo (June 3rd was the final day). Instead she had decided that today was the day I got my body mold and tattoos done. So, I am officially prepped to start radiation. They build a body mold and do a CT scan with you in it to plan your radiation therapy around your organs. At least I know that they care about me on the inside (I am full of bad one liners lately). 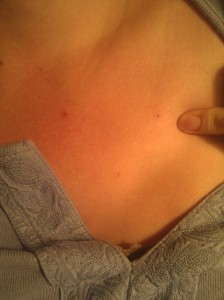 tattoos. The tattoos and the body mold are how they line you up for your radiation therapy. I expected the radiologist to come after me with a tattoo gun, but instead he dropped a dab of ink and twisted a big needle in the ink (which may seem scary, but I have feeling back in the skin of my left breast. If you SAW the size of the needle that they use to do breast expansion, that goes ALL of the way in, you would understand why I find this little tattoo process to be nothing. Either that or 4 attempts at a vein in my foot have made me numb. Hmmmm… I seem to have a high tolerance for needles these days).

I have 6 tattoos I think (I will have to look more closely). I radiation range includes the lymph nodes in my neck near my breast along with the lymph nodes under my arm. Yet more evidence that I get the glorious “kitchen sink” treatment. These tattoos are tiny little dots. I made a comment about tattoo removal to the hospital employee, but after seeing them, they really aren’t all that bad. There are two in the photo, they are more pronounced because they are still red from being poked around.

The first 5 weeks of radiation will be my whole breast and surrounding area. The last week will be targeted at the area around my scar (which I thought a bit unusual), thus 5 days a week for 6 weeks. I asked my radiation oncologist why they hit the scar (I am a bit nervous about scars opening up, call me crazy)? She explained that with the particular mastectomy that I had, IF the cancer comes back, it is typically in the area around the scar. Fun.

After worrying about starting radiation late, it turns out my dry run isn’t until the 5th of August. I start actual radiation on the 8th. I will be done mid September, which makes 3 month later December. Thus, sadly, just barely 3 months after radiation I am scheduled for my lat flap on my left side, which will be on December 20, 2011.

Also, apparently having my hormones back (menopause is officially over), being done with chemo and having recovered most of the way from surgery means I am ba-ack (ie. sassy and as big of a pain in the butt as ever, but sick Mandi is boring). They told me that I should get fatigue after 2 weeks in radiation that will stick around through the rest of treatment and a few weeks after, I am hoping it is nothing like chemo..