Wednesday we (by we I mean Amber, my super awesome employee that got a huge award from the university this week, because that is how awesome she really is), named my surgical drain Gus (Joan came up with the idea that it needed a name at this point). This is all evidence that I am back at work. I did manage to put in a decent part time work week (although there were several times I got sent home by my staff because they felt I was pushing more hours than they felt defined part time, I have about 10 moms at work of all ages, but I love them all).

Gus was much easier to discuss once he had a name, but I was getting to the point of extreme aggravation that he was still around. I didn’t want to rush taking him out because I was a bit nervous about my previous incidents this year.  I was supposed to have started radiation by now, and would be further along in my treatment but my drain was being a drain (that joke is brought to you by my father).

Surgical drains come out based on how much they drain (you have to empty them a couple of times a day). You remove one when the output is in the zone that your body will absorb the fluid on its own. Gus would average the proper amount, but would spike to just at the “almost ready” zone to the “yank me I am done” zone. He has been doing that for over a week. Ready, not ready, ready, not ready… I called the nurse Friday just to get her thoughts on the matter (because yanking it now also meant that I would get expanded, which potentially fills up the space that the fluid does). My doctor is out of town for a couple of weeks, and my drain output just kept not behaving while he was in town so that he could do the first expansion as initially planned.

I was so borderline, but the next opportunity to pull Gus out was 4 days away. The nurse felt confident in taking it out as long as I promised to take it easy over the weekend (my first concern was whether or not the incision would open, it was made clear that I am well out of that risk zone, also I was reminded that having had the surgery that I did I am in an entirely different ball game when it comes to healing because I have a blood supply in there now). Well… taking it easy meant doing the things I worried about doing with the drain in: boating and camping. I asked if no activity meant I could go camping (which meant sitting in a camp chair, not packing and unpacking a camp site), she felt this was ok. I then asked if it also meant I ride on a boat (which she seemed surprised that I was asking, but normally I help launch the boat and pull the boat in on the trailer). She felt that riding on the boat would be fine. As a precaution I am still on antibiotics as the excess fluid if it builds up is an infection risk (the drain itself is an infection risk, so you stay on antibiotics as long as it is in, so I have been on them the last 4+ weeks). 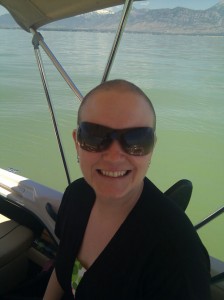 Boating with a fuzzy head.

Friday morning I looked in the mirror and realized that there weren’t any “shiny” spots left on my head. I came to the conclusion that I was so tired of hats and scarves that I was going to let it all hang out and just go with what little hair I have now and pretend like I am making a major fashion statement. I was incredibly self conscious at first, but got used to it later on.

Friday we really went camping! It really felt like the first time I had done anything all summer. I tried to take it as easy as I could. I was pretty exhausted when we got home Saturday morning. So I spent Saturday napping and lounging on the couch.The next task at hand was boating, and doing the task that I had avoided emotionally all year: buy a swimsuit. I had Mike take me to get one, I had researched the styles that were around this year and felt that a tube top/tank top style would keep my scars covered up. It turned out to work out just fine in that department, and I learned that a tube top actually stays up when you don’t have real breasts. I also pulled out my cover-up that protects the area that will be radiated soon.

We slept in on Sunday and managed to get the boat on the water before 2 PM. The boys water skied and we relaxed listening to music it was definitely a good time.

I find out Tuesday when I will start radiation!.