Another Day Another Dollar

Home » Life » Another Day Another Dollar

Last week I saw all of my not-main-oncologist doctors. My Pulmonologist, my Palliative Care doctor and my team that does my intrathecal chemo. I was also getting my labs drawn so my oncologist could see what Neupogen was doing to my white blood cell count so we could plan on when and how to add Affinitor.

When I saw my Palliative Care doctor I mentioned that my tummy had been causing me pain, but that my pain meds didn’t seem to do a lot for it. That morning I had started to get a raw and sharp pain right smack dab in the middle of my lower rib cage that was new, but seemed like an ulcer. She out me on Carafate, had me stop my overindulgence in IB Profin and start my Prilosec back up (I had stopped taking it, not the best of ideas). She mentioned getting my tummy scoped.

When my labs were being drawn my port was being a pain in the butt as usual. The nurse couldn’t get the waste to come out all of the way, I worried a bit, but went on with my day (she told me that it shouldn’t matter as much on a CBC). My Nurse Practitioner who frequently does my intrathecal injections mentioned that my red blood stuff was super low. I mentioned the waste and she told me that it doesn’t matter as much with a CBC. So I wasn’t super worried, until later when it was mentioned to me to be careful about lightheadedness (a common symptom for me anyway) etc. Sunday night I felt a bit woozy and was talking my mom. We got the count numbers and between the two got more worried, but I didn’t want to go get my blood drawn at the hospital on a Sunday night. Then there was the worry about a bleeding out bleeding tumor (although I had not seen evidence of blood in places where it would be expected.

I thought I accidentally broke a small piece on my Pleurx Catheter (lung drain) a few of weeks ago trying to fix a part I thought was twisty (my flow had gone down and my fluid didn’t FEEL down, so I fiddled with it). 🙁 It made a little tiny hole in the catheter that sucks air through when you drain it (or so I thought). I did it after I was already going to a Pulmonology appointment, and I had been worried that my ongoing sharp tummy pains were from fluid in my lungs (it can hurt weird places, like your shoulder, or your tummy). So I had them prepped to hopefully drain my right lung and hadn’t brought up the left lung (I had called the on call Fellow who did nothing and didn’t seem to know much about Pleurx Catheters).

My Pulmonologist didn’t see any fluid worth draining in my right lung, but saw some fluid in my left lung. He wanted me to hold out the week and not drain the lung and do an new x-ray. When I went to my appointment my oncologist showed me that my left lung was very full of fluid and my right lung was dry in the x-ray from last week. I had broken down and drained some fluid on Monday, but only got out 100 ml. I think the whole circumstance clogged the catheter, inserting it was really painful process for me (I may be crazy). I am scared of putting a new one in and scared of not, plus the cough hurts my ribs with mets, like OUCH, cough, OUCH, cough, OUUUCCHH. 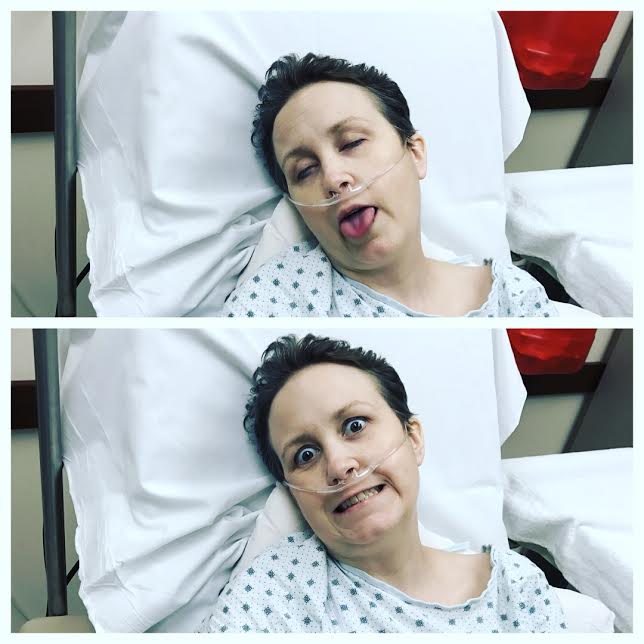 I call this one flight of the everlasting zombie Mandi.

My liver counts were up (AST counts, there are a few of them), AST can also signal tumor growth in the bones and liver. When my oncologist was pushing on my liver I could feel pain, and I had the “oh, this isn’t good,” feeling and started crying.

My oncologist asked what I wanted to do, I suggested that we go ahead and do chemo. We look at the tumor markers today and see what they did and take it from there.

We did Navelbine and Herceptin. They ran into problems with my port yet AGAIN, so the nurses put TPA in it and I went in to have it cleaned out first thing in the morning. It worked like a charm, one big SUCK and boom, my port gave blood first try. Wahoo!

I went in this morning to see my Pulmonology team. The fussed around with my Pleurx drain. They tried to squish out fluid, put saline in and suck it out and they also decided to go for the TPA route. This cleared the tube and fixed the weird bubble/foam issue I thought I had caused when I had messed with the tubing – luckily it was clogs, not me. They got some fluid out, but not much. I did all sorts of contortion and every manner of things when we were trying to squish out more fluid, but no wins. Just got a little out.

When my Pulmonologist came in he showed me that my left lung is partially collapsed and will pretty much never unbind itself. The bottom is now solid tumor (the lung) and the lung is surrounded by fluid that is loculated (stuck in pockets of fluid).  He decided that he would leave the drain in because it makes me more comfortable (for a short time I get a break from coughing). I coughed so much Tuesday that my ribs were raw all day today on my right side (we were doing this to open up my port – hard coughing with your arm over your head).

My oncologist was willing to give me a few treatment options to try (one was to finally add Affinitor like we had discussed), possibly a trial drug… or go back to our initial discussion, that this treatment would be my last and I would look at hospice. I was so exhausted from the day that I asked if I could sleep on it.

So, tonight I will sleep on it. It is a big decision and I appreciate that my oncologist lets me be involved in my treatment decisions. I hate feeling powerless, which I do a bit since my cancer outsmarts just about everything we give it, fast. 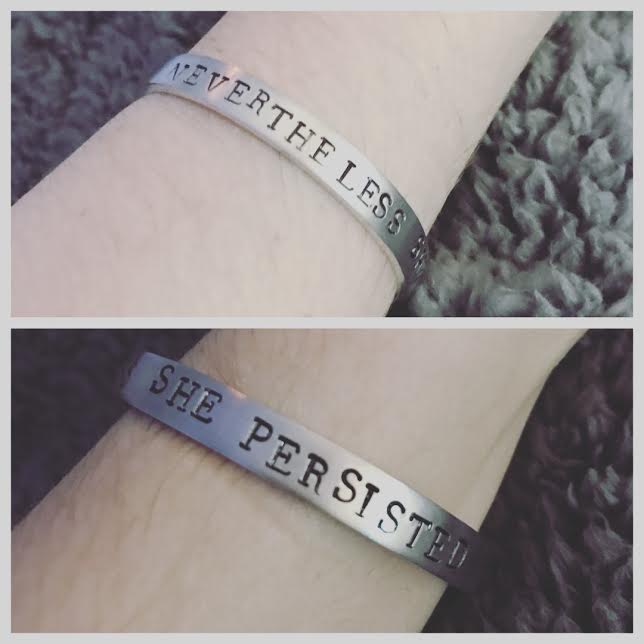 A lovely bracelet from The Brave Sparrow. Nevertheless she persisted. Her Etsy store: https://www.etsy.com/shop/TheBraveSparrow

It just seems like the ongoing onslaught of bad news doesn’t seem to stop. Our hearts are broken. There are decisions to make.

I cancelled our palm tree trip, I had booked the Dominican Republic (where Mike and I went on out Honeymoon). I am going to try to book something a little safer in terms of medical emergencies, hopefully not needing it, just not trusting my luck lately.

Please excuse typos, I am tired. I will try to fix them later. *Much love*

You may note comments are turned off. You can give feedback/leave comments at http://www.facebook.com/darngoodlemonade, at Twitter to @advertisinggeek and Instagram @- bad people have been using the comment system to hack my blog and made life generally miserable for a while there. I don’t know who I pissed off to deserve so much hacking and cyber attacks. 🙁