Home » Updates » Back in the Saddle Again

Back in the Saddle Again

This is my fuzzy and I shall call it my fuzzy. 1 1/2 months post chemo.

Today was my first day back at work after I went on short term disability in May after I had to have surgery to remove my breast expander. Taking time off of work was bittersweet. I was so worn out that I couldn’t make it to work and heal properly, but I really didn’t want to have to take an extended leave from work. Between three surgeries and chemo every two weeks my body had had enough. I feel like I have rested and recuperated. My body had a good amount of time to heal after my fourth surgery this year which was the breast reconstruction on my right side.

Although I am a bit lopsided, as things heal and I am definitely glad that I did not have the lat flap done on both sides at once (although if I had, I still would have had the “swap” surgery left – which is when they switch the expandable breast expander with a permanent implant). I will get an expansion on my right side and even things out a bit more after I get this final drain removed. The surgical drain has been a bit all over the place, I can’t guess when it is going to be ready just yet, after my previous complications I can’t push to get it out too early, especially now that I am back at work.

So far it appears that I have the same hair color (which is bottle blonde with no gray, once it is long enough to dye blonde 😉 ) and I am not sure if it is any curlier or not. It is certainly growing everywhere it is supposed to (you would think that the world would be nice enough to selectively grow hair where I would like it to grow and wouldn’t grow it where I would like it not to right?). My eyelashes and eyebrows are growing in bit by bit. You tend to shocked at the rate that you lose your hair, but I tend to be a bit more surprised at the rate that it comes back (except your head, it needs to grow faster on your head). Little baby hairs are coming in everywhere. 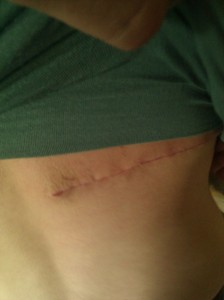 My back, Mike says it looks amazing and looks wrinklier because of how I was standing.

My back now feels completely healed (the scar, the lower back still gets worn out the more I am upright, but that back pain is slowly going away). The surgical glue and the scab are completely gone off of my back and now I just have a thin red scar that should be invisible as time goes on as long as I take good care of it. The front isn’t quite as healed, but it seems to be healing nicely. Three weeks was the required date for time to heal before expansion, so I imagine I should be healed up under the glue nicely from the areas that I can see the scar so far.

I am still waiting to schedule radiation. My surgeon won’t clear me for it until after I have the final drain out. I will have radiation for six weeks for five days a week once I start..