I didn’t write much or really do much on the computer this hospital stay because it hurt to type and dilaudid somehow makes everything super blurry for me (I can’t read the computer screen very well). 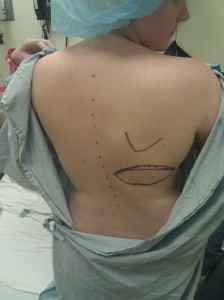 Markings for the lat flap surgery.

They had me scheduled to get prepped for surgery at 10:30 AM. Which had me a little worried because that meant I was most likely the last surgery of the day for my plastic surgeon (4 hour surgery that I figured would start around 12:30). They actually got me through surgery prep a lot faster than I had expected and surgery started at around 11:30 AM. The plastic surgeon came in and marked me up with a pen. Mike remarked that the markings were like the ones in Nip Tuck which I have been watching a lot on Netflix. I am sure my plastic surgeon loved that I was watching a show with very unrealistic plastic surgery results right before I have a big surgery (and miraculous recovery times). After he marked up my front he proceeded to mark my back (I had seen pictures several time of the back drawing for the lat flap). They mark what skin they will take up front with the latissimus dorsi, I have no idea how he just eyeballs it, and knows it will match up. 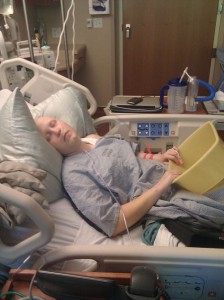 Holding onto my bucket because I am not feeling so good.

The next issue at hand was my IV. My left arm is not allowed to have IVs, blood pressure or anything on it that could cause lymphedema (pooling of the lymphatic fluid). They couldn’t put it in my right arm because it had to be in the sterile zone and they would have to flip me during surgery. This left my feet. Anyone who has ever had an IV put in their foot will attest to why they don’t put them in your feet. I asked that they give me laughing gas before they attempt it – the anesthesiologist thought this was an o.k. idea. It took them four attempts at 4 veins in my feet before they were successful (OUCH!) I was giggling through the first two attempts (must be why they call it laughing gas).

The surgery lasted the whole 4 plus hours and I was pretty darn cranky when I woke up (part of it was because they were telling my family they had my pain under control and they didn’t). I was very nauseous. Unfortunately they didn’t get me in the comfortable zone until well into the night (the nurse was able to get me ahead of it). Mike snuck a picture of me when I zonked out in one of my nauseous bouts, which sadly really shows what my day was like (not going to sugarcoat it, I didn’t feel good). The evening nurse was able to get me comfortable and I actually slept really well that night.

The next day was going pretty fine, pain was under control and my dad came to keep me company. A doctor came in to talk to me about the fluid in my left lung (WHAT?!?), the strong possibility that I had a blood clot (HUH?!?) and the x-ray they took of my lungs the night before (I don’t remember an x-ray?). I told him the doctor that morning had wanted to get me on oral pain meds so that we could start the preparation to send me home. The doctor looked at me and told me I hadn’t been on pain medication all day (the 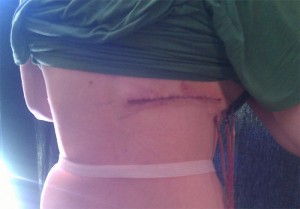 Incision on my back, 4 surgical drains (the white around my waist is vecro that I attach the drains to).

machine said it was giving me medication?). I was in shock. The doctor walked out and my dad walked over to the machine and looked in the part with the diluadid and told me that it looked like there was medicine in there. Mike called and I told him about the fluid in my lung, blood clot and I had somehow had an x-ray taken that I don’t remember. 5 minutes later the doctor came in and apologized, he had wrong patient……….. I called Mike and told him. I was glad I wasn’t crazy, I guess the doctor mentioned to my nurse that I was “out of it” and their discussion pointed out I was in fact aware of what was going on, the doctor had the wrong person. I am going to assume he was a med student, I hope he doesn’t make that kind of error twice.

My dad stayed with me the rest of the day, Mike came by after work, and my mom and Steve drove down after mom’s birthday dinner (happy birthday mom!!!). I was feeling well, a little sore, but pretty darn o.k. Just before bedtime they switched me to oral pain medications. Friday morning they were ready to send me home. I was nauseous again, but was ready for a shower and my own bed. My dad took me home. My aunt Sonnie drove down to have lunch with my dad and they explored the grocery store for two hours looking for a variety of edibles for me that I could try to get down when nauseous. They stocked my fridge with a bunch of goodies so that I had something to take with the pain medications.

Mike has been doing a great job at trying to keep me comfortable now that I am home. I have been trying to rest as much as possible, but this surgery isn’t an easy one (not that any are “easy”). Hopefully I will be feeling even better in the days to come..