Stats everywhere, who knows what is whatever. Go Dr. Google.

This one is my fault, I guess I didn’t properly Dr. Google Zometa. I had heard of this very rare side effect that involved your jaw rotting away, but I was like “hell no, not me, not looking into that. NOPE.” Well… guess what?

Don’t Dr. Google it. The images are awful and the ones in my pamphlet are just as bad. 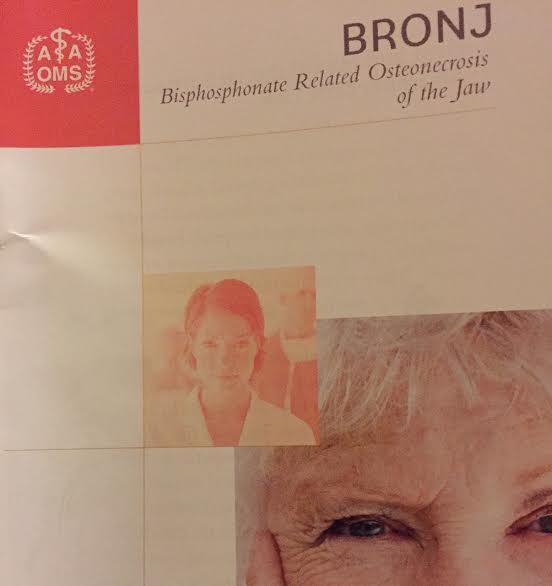 Not long after my first Zometa infusion I had a little hole show up in the inside of my gums. I didn’t think much about it, gums heal fast! Right? A week later what looked like a piece of tooth came out of it. I thought that was pretty odd, but thought “hey, my bones are getting stronger, maybe they pushed out an old piece of a wisdom tooth?” My naiveté is priceless.

Fast forward 2 months and I have a raging infection in my mouth. I can’t sleep at night and I am trying to push off doing anything until my regularly scheduled dentist appointment. The day before I called my dentist’s office and just asked if they had any cancellations and if they could look at me (Mike had a root canal done when I was in for my oophorectomy, so they know us well). I knew if I didn’t start antibiotics soon I was in trouble (and by now I had read what ONJ was and was super not stoked). My dentist is the most adorable dentist on the face of the planet, he just did an x-ray on the teeth near my infection and told me my teeth were fine. He looked at the hole in my mouth and basically told me he can’t diagnose anything, but that he is concerned.  I needed to see an oral surgeon (in such a way that I knew he was saying I had ONJ) – he also had me cancel my dental cleaning the next day because they didn’t want to get in my mouth with it all icky. They called the oral surgeon for me, he was in surgery yesterday (they actually tried to get me in NOW) and got me in today instead.

He did send me off with a prescription for some antibiotics which I filled promptly. I then attempted most of the workday. Work sort of went ok, but my jaw was SCREAMING. I was near tears because I knew it was not in good shape and I was/am a little freaked out. I was being snarky (which is mildly normal for me, but there is a level of snark that is not normal). I went home and worked from there where I could snark in private, and cry in private.

Today I went to see the oral surgeon. He barely looked at me, based on my story and my Zometa stuff along with a quick look at the hole in my mouth he told me I definitely have osteonecrosis of the jaw. I teared up a bit when he told me his recommendation was that I stop Zometa.

He told me I was making him tear up. So we had a sad moment together. He talked me through being on long term antibiotics, I explained to him why I know I am allergic to Vancomycin and that sadly I am professional at being on antibiotics.

3 months in and I already flunked my first line of treatment, this just sounds so… so… Mandi. It sounds like–Mandi. When you totally screw up healing or get a rare side effect, you can now call it a “Mandi.”

I had alerted my oncologist’s office that this was going on. They told me to verify with them after everything and “hopefully it was a tooth.” I let them know after the official word today. They are going to chat with me about it at my appointment on the 16th. Of course they will be cancelling my Zometa infusion scheduled that day at this point.

My oral surgeon told me that he is happy to discuss anything and everything with my oncologist. He was willing to work with her however she wants this taken care of (and wasn’t requiring that I stop Zometa, just that he recommended it, because it will get worse). He also noted that after the amount of Zometa has decreased in my body, we can go in and do surgery to remove the pieces in my jaw that are likely to do this so that I can start Zometa again later on if my oncologist wants to go that route – which brings me some relief (I like it when people never say never, SMRT).

The oral surgeon says I get to see him regularly (I feel like I am adding doctors to my entourage here and there, I had a lung dude, now a mouth dude… who next?). We start with antibiotics which I will stay on for a very long time. If we don’t clear up the infection and my jaw doesn’t heal in the next month, then we explore “the next steps.” I will do a regular mouthwash that could stain my teeth, but it can be cleaned off at dental cleanings. He told me not to worry, we can clean it off and my bishop won’t see it.

This is particularly funny. I live in Utah, I was raised Mormon, I haven’t been Mormon for a very very long time (that is a long story for another day). Coffee stains on your teeth are a no-no and your bishop is the head of your local church, and I LOVE COFFEE. Somehow he didn’t know that looking at my mouth, muahahahaahahaaaa. Some of my family may enjoy that (that I look like a good Mormon girl in my work clothes, maybe not that I LOVE COFFEE). 😉 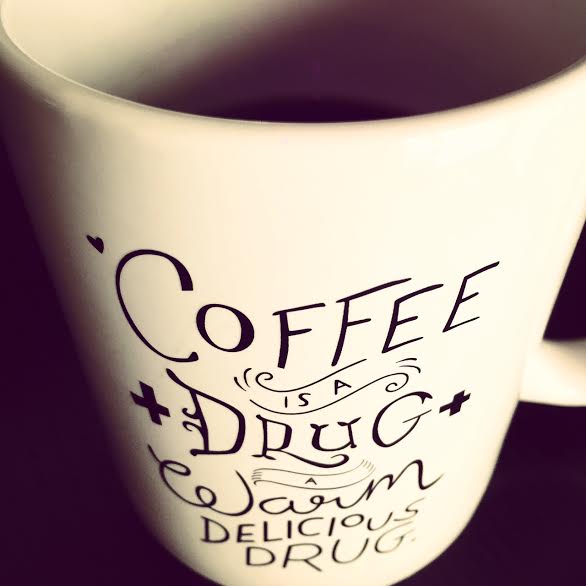 My birthday present from my friend Amy because I apparently hate coffee.

I really like him. I somehow do get good-egg doctors around the valley.

So there is your update.

Sometimes you have to take a lot of deep breaths when you try really hard not to be mad at the world. Being mad doesn’t get you anywhere. Somehow you pull it off. One day at a time..