I went to see my plastic surgeon last week. It was my first time in the new breast care wing of the cancer hospital. Since it is a new wing they also have all new employees at the desk. When I arrived the front desk asked if I was there for a mammogram – sometimes I should think before I speak – I giggled and explained that I didn’t have anything in there to check in a mammogram and explained that I was there to see the plastic surgeon (the old receptionists thought I was a hoot, not sure this one agreed).

I was diagnosed at a different hospital than I received breast cancer treatment and got this in the mail (it made me giggle and I showed it to Mike, it made him giggle, I think cancer gives you a sick sense of humor):

I can’t believe how nervous I have been about surgery (I figure it has to be about surgery). It started about mid week last week. I have been a ball of raw nerves. My best reaction is to try to stay occupied, the more quiet time I have the more I tend to stress out. I am back to reading again (which is SUPER exciting for me, I haven’t been able to sit down and focus on a book in a year). I have been playing video games with Mike, making holiday treats for coworkers, Christmas shopping and doing all things December. 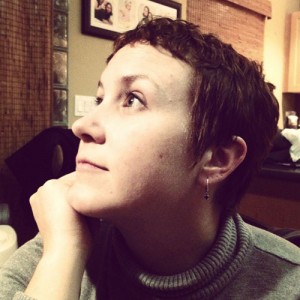 Mike took this when we were goofing off at a friend's house. I call it "deep thought."

The other part of my anxiety stems from the fact that it has been almost one year since I was diagnosed with breast cancer. I made my appointment in early December to see my doctor about the lump, I saw her on the 14th and my ultrasound was on the 30th of December. We usually host a New Year’s Eve/birthday party for our close friends, this year I am going to still be on bed rest, so I will be pretty boring. I have had several people checking in because they were planning on coming over (hopefully no one just shows up, that could be pretty awkward), but I know who may or may not read the blog anymore (which is completely understandable, the blog is not all that exciting if you are looking for the “raw and real” mid-cancer-treatment bonanza that was my life, it has evolved to the “meanderings of the post cancer treatment mind of Mandi” and she gets a bit more grumpy, or is more willing to post the grumpy stuff… you decide 😉 ). Either that or they are in denial over my surgery in a week, if that is the case, we can be in denial together. 😀

Today marks the 3 months since my last day of radiation (yay!) which means I am officially qualified to get breast reconstruction surgery as of today (amazing that it takes that long for things to recover in there enough to be ready for surgery). I was actually scheduled to go in tomorrow (call me a go-getter) until they moved it to the 27th a couple of months ago because my surgeon will be out of town.  The skin has healed up well from radiation, I have a permanent “tan line” under my armpit from tattoo to tattoo, but it isn’t very noticeable. The general area where they radiated did pull the expander up tighter to my body, the general area is stiffer (the plastic surgeon said he was going to have to lower that one to get them to sit a bit more evenly). I will be seeing my Radiation Oncologist for a checkup on Thursday.

The reason I have to have a lat flap breast reconstruction (where they take a muscle from my back and burrow it under my armpit and create a pocket for an implant) was because they have to bring blood flow to the radiated breast (and I haven’t enough spare belly or butt to transplant tissue from those places). I knew that this was really the only surgical option I had if I chose breast reconstruction after consulting with a couple of plastic surgeons (and trying to find any other option, but wasn’t given one, especially after my first surgery failed).

They use the muscle to increase the likelihood that my body won’t encapsulate the implant. It is also to help the skin and nipple survive surgery due to radiation damaging the skin and blood vessels in the area. I had to have a lat flap reconstruction on my right side after I failed to heal from my mastectomy, so I have been down this road before. Almost there!.