Home » Updates » Once Upon a Drizzly Monday Morning

Once Upon a Drizzly Monday Morning 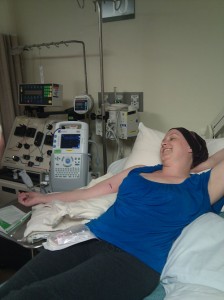 Half an X marks the spot.

Talk about an emotional roller coaster! Before my appointment today I had thought long and hard about what was going on with the incision, especially after I was fever free for two days. Every single stitch was surrounded by red angry skin and the general incision area was pink. This happened last time I had the stitches in for 3 weeks, but on a much smaller scale as I only had a few stitches that time. Honestly, I think my body hates stitches. The last time I ever really had external stitches was after a car hit me on a crosswalk when I was 12. I had about 7 inches of stitches up my leg and all of the skin between the stitches died which left me with a big nasty scar. I had scar revision surgery to fix it, but before breast cancer, that had been my only experience with stitches, and it wasn’t great.

The doctor and the resident had different opinions about the redness around my stitches (Huntsman Cancer Institute is a teaching school, so you get to know a lot of residents), the resident felt that this was normal for how long the stitches have been in (3 weeks), and the doctor’s opinion was that it wasn’t the stitches and that I had started developing an infection.

The doctor could not feel a physical pocket of infection between my skin and expander, so it was somewhat on the fence whether or not I really had enough an infection to force me to need surgery (but I was willing to go if that was the verdict). The redness also doesn’t go beyond the stitch area which makes it hard to know for sure. Along with the skin being warm, but not super hot to the touch. I asked it they would consider taking out the stitches and replace them with glued on external sutures to see if the redness would clear up. The doctor compromised and took out half the stitches (selecting the most irritated) and replaced half with the papery sutures (not sure what the right term for them is). Normally stitches are left in for at most 14 days, mine have been left in longer because of the risk that I have not healed because of the chemo. I was due to get them all of the way out next week. 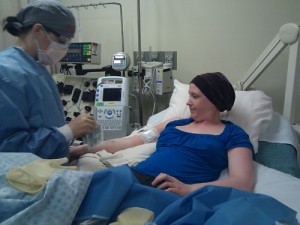 The resident and the doctor were discussing back and forth what antibiotic to put me on. The one they really wanted to give me happens to have sulfa, which I am allergic to. They mentioned that a full blown infection would put me on IV antibiotics, I asked them why don’t they just do the IV antibiotics now and call it good? The doctor looked at me and made a “you aren’t going to like what I say face” and mentioned I would have to get a PICC line. I know PICC lines aren’t fun, my mom has one. I am going to end up doing the IV antibiotics with or without the expander, so if that is the way to kill a potential infection lets KILL IT!

This meant waiting several more hours to get the PICC line. A PICC line is essentially longer term IV access through a line that runs inside of you from your arm to a main artery near your heart. It comes with risk of infection 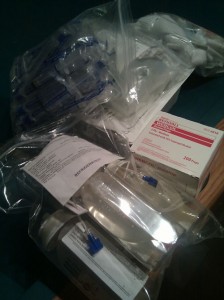 (doesn’t everything these days?). It is not a long term solution like a port, and they will take it out the moment I am done with the IV antibiotics (which will be administered twice a day for two weeks, 7 AM and 7 PM). They will also be able to use the PICC line for my chemo Friday, so it does save me from another needle poke this week. After they finished the PICC line I had to get an x-ray to make sure it went to the proper location (kind of scary!).

The hospital delivered the medications and supplies and now I am waiting for the nurse to come teach Mike and I how to administer the Vancomycin and how to flush the PICC line to avoid infection.

Although I am elated that my day did not warrant the surgery or other surgeries, I am exhausted from a full day at the hospital and the stress of it all (and perhaps my body is finally shedding off the adrenaline related to the fear of surgery). I am going to take a happy stress free nap to celebrate my day while I wait for the nurse..