I left my last post a bit too open ended.

I didn’t choose hospice. I just wasn’t mentally ready for a hospice discussion yet. Unfortunately I should have seen the discussion creeping up more and more as treatments have failed me more and more. My cancer is a bastard, it keeps getting smarter. Each time a treatment fails, the chance of the next one working well is less and less.

I do have a list of hospice companies people recommended, but I am having an interesting time figuring out which ones are covered by my insurance. D’oh!

I have so many different kinds of breast cancer anymore I don’t know what to call it anymore. I lost my estrogen receptors on the tumors in my lungs as they spread. The cells in my brain are who knows what… (plus there are the ones in my brain and the ones in my CSF). My original cancer is floating around in there somewhere which has high estrogen receptors and no HER2+ receptors. It seems like every which way we have tried to slay the beast, it comes back with a roar.

I did opt for Navelbine and Herceptin, Mike is sitting next to me in a hospital bed in a private room getting my infusion (they like to put me in a private room lately, I don’t know if it is because of my intrathecal infusions or they just like to hide me? Can’t have the girl with the poofy hair hanging out in the main room, noooooo). Mike went and got me my fat little waving puppy dog from the gift store when I was waiting to start chemo. Navelbine is the world’s smallest bag of chemo by the way.

Speaking of intrathecal injections… I opted out of WBR because of my expected time to live. The recovery time to a normal place after WBR had me worried. I also wanted to limit how much time I spend at the hospital for infusions (although Navelbine is a weekly infusion, my oncologist is giving it to me two weeks on and one week off so my body can recover). The decision was to add Depocyt, an intrathecal medication one of my stage IV Utah leptomeningeal mets started with. He has a really good response to it, it is also nicely every 2 weeks in the beginning (vs. twice a week that I have been doing with my other medications), then switched to once a month. This gives me more time to hang out with my family and friends as the infusions tended to wear me out and give me headaches.

My oncologist also is going to let me start Affinitor after I have adjusted a bit to my other medications (they will all kill my immune system, and I just barely cleared some kind of sinus cold thing I picked up at my birthday party). My Foundation One tests pushed strongly for Affinitor and it is another angle that may squeak out a bit more time.

Last week I was expecting to have a couple of girlfriends over (I swear I haven’t seen my friends in ages… except for my birthday, but that was busy). That morning I started to have a crippling pain in my right side, I was fretting. Dr. Google had me worried my liver was failing me, maybe my appendix was about to explode… the amount of pain I was in, something wasn’t right! I decided that if I still had the pain in the morning I would call my oncology team and go to the acute care clinic (it is their version of an ER/Insta-care, but you don’t have to be surrounded by a lot of infectious people and your doctors are around and can maybe float in if they have time…).

My pain was worse in the morning when I woke up, at that point I just wanted pain control at the hospital. HOLY COW. After a bunch of tests (no blood clots in my lungs? Thanks Dr. Google, you didn’t serve that one up!). My liver they only saw two tumors over on the right side (only two? did I have more before? Did Navelbine and Herceptin kill some!?). Yadda yadda, somewhere, somehow, I had passed a kidney stone. I don’t know if I had passed it in my sleep, or while I was at the hospital (it took about 5 hours to get my pain under control, I finally fell asleep for awhile). I had passed a kidney stone, had a swollen kidney and had a kidney infection… I have had kidney infections, but OUCH. I am just barely starting to be able to use my right side and move around… (I also has to request some pain control while I was getting my infusions, OY, I was kind of embarrassed – but I also don’t know how much I can ratchet up my pain medications without killing myself, the cancer is already doing that, I am not supposed to).

My dogs refuse to leave my side since I came home with this kidney adventure thing (my mom passed kidney stones the night before she had the whole family over for Christmas dinner, that woman is TOUGH, she took an Uber or Lyft to the hospital by herself in the middle of the night and they brought her pain meds AFTER she had passed the stone – I at least had stuff in the house to sort of get me to the hospital). My mom’s pain tolerance will never cease to amaze me!

Now that I am planning on decluttering and going through my stuff to try to cut down on what Mike has to deal with later. I have a list of stuff to do (that was supposed to be started pre-kidney adventures). I am hoping to book a trip on my off week with Mike to go somewhere tropical. My oncologists expected the added treatment to buy me two months, so I need to spend at least one of those weeks under a palm tree I think? Plus the call for hospice is usually when you are expected to live 6 months or less… so I am just making up timelines. No one has a crystal ball. My biggest request was that I didn’t want to die from the leptomeningeal mets… After that, we see how things go?

Mike got a new tattoo this week: 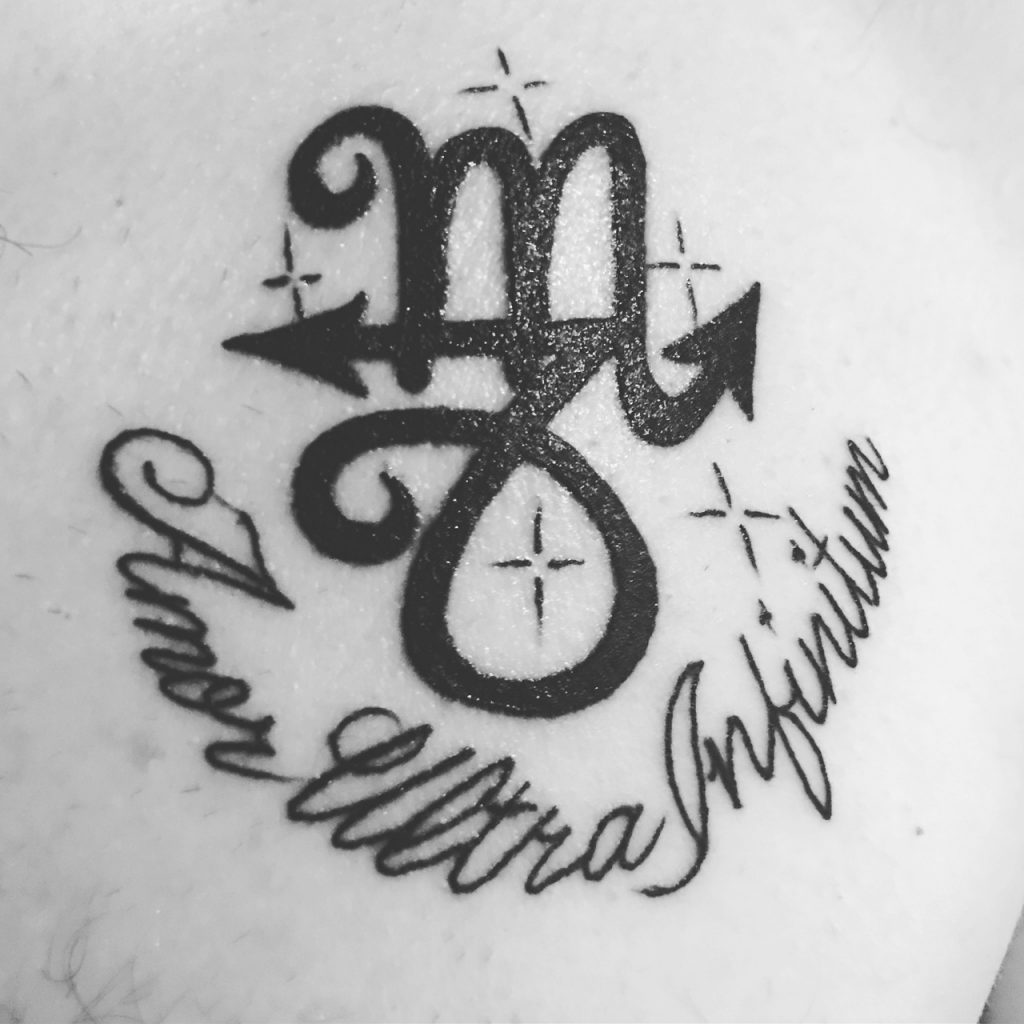 Mike’s new tattoo. It is our astrological signs and it says “Love Beyond Infinity.”