Hospice or Navelbine and Herceptin

One of the things I never wanted to be tied to was an oxygen machine. Which I should slap myself as I was a young dumb teenager that thought smoking was cool once upon a time when I was a “hardcore rebel.” Nothing says “hardcore” and “rebel” like I am going to suck down this disgusting cigarette and fill my lungs and body with poisonous chemicals.

So it almost seemed somewhat less surprising that when the cancer came back, it chose my lungs initially (there is no correlation between the two that I can locate, it is just me wishing I hadn’t made dumb decisions, but I can’t change the past). The lung nodules and cancer in my lungs was fairly dormant until I started Xeloda, then the cancer decided to spread its hypothetical wings in my left lung. It is all over in there and the Pleural fluid is the bane of my existence. Mike and I have draining it down to a science.

I have intrathecal chemo twice a week, draining my lung every two days (it was every three, but when it stepped up output a notch I went ahead and went back to the original suggested drainage, which was every three days). It makes me more comfortable to get that crap out of there. Sometimes I have to twist and turn and sit up and down to get the little pockets to open up and drain.

The unfortunate thing with the cold and bad air in Utah is that beyond being on oxygen at night, I am finding myself more comfortable to go ahead and be on it during the day (my machine that they brought me fills up oxygen bottles, so we aren’t paying for bottles, the insurance just rents a compression machine). I drag my bottles of oxygen to my appointments since I cough less and I get less dirty looks from people (I have hair and I cough, I don’t look like your average cancer patient right now). This goes on to make you think long and hard about our societal belief that a cancer patient is supposed to be a bald frail patient vs. a heavy (steroids for many, which makes us poofy and fat) hairy (many chemotherapies don’t cause hair loss) patient.

I kept hoping that my lung would dry up from Doxil, but it hadn’t. The worst part is that I now have fluid around my other lung and in my heart cavity (discovered when we did my chest CT a month ago, which was a month after my first Doxil). My tumor markers weren’t pulled last go, so they went from 440 to 1,830 in two months. I more than doubled. I kind of tripled. In fact my oncologist called me this morning to talk about it and prep me for a discussion about stopping treatment (or what options may look like if I don’t). My MRI also showed tumor spread along with elevated enzymes.

My oncologist and my brain/spine and also breast oncologist came in to talk to Mike, my mom and I. My dad had wanted to come up, but it was going to be a full room. Had I known the level of discussion we were going to have ahead of time, I would have had him come. They really steered the conversation around hospice, feeling better because of hospice etc. I just wasn’t ready. With the amount of time it sounded like I had (6 months or less is the suggested time to have this conversation according to the ASCO), do no harm… luckily I haven’t had a rough time on Xeloda or Doxil, low side effects, they just didn’t work – so there is my rough go I guess. I had a rough emotional go.

My oncologist suggested possibly Navelbine and Herceptin. This may buy me a couple of months, they didn’t want to get my hopes crazy up since the last two chemos have failed me within months.

So. Now we have to make some decisions. Do we want to go to South Dakota? Push for some therapies that are outside the normal regimen and see what combination therapy can do for me (I could get very sick and make us very broke). Do I try to maximize this therapy and go ahead and go on hospice when the time comes when we know it isn’t doing anything (which could be the very beginning).

Please give us some quiet space right now. We can’t handle a bombardment of visits, texts and calls, we love you, but right now we need to chew on this, but if you weren’t in our lives on a regular basis before this week we will find the best way to squeeze in time with friends etc. in time (unless you are going to come and steal Mike and cheer him the f*** up, shower him with gifts and all of that gloriuous stuff. Then maybe we can talk (he already read this post before I did my late night proofread – publish now, asking for forgiveness later, so he may miss that it is up now 😉 ).  Love you all. 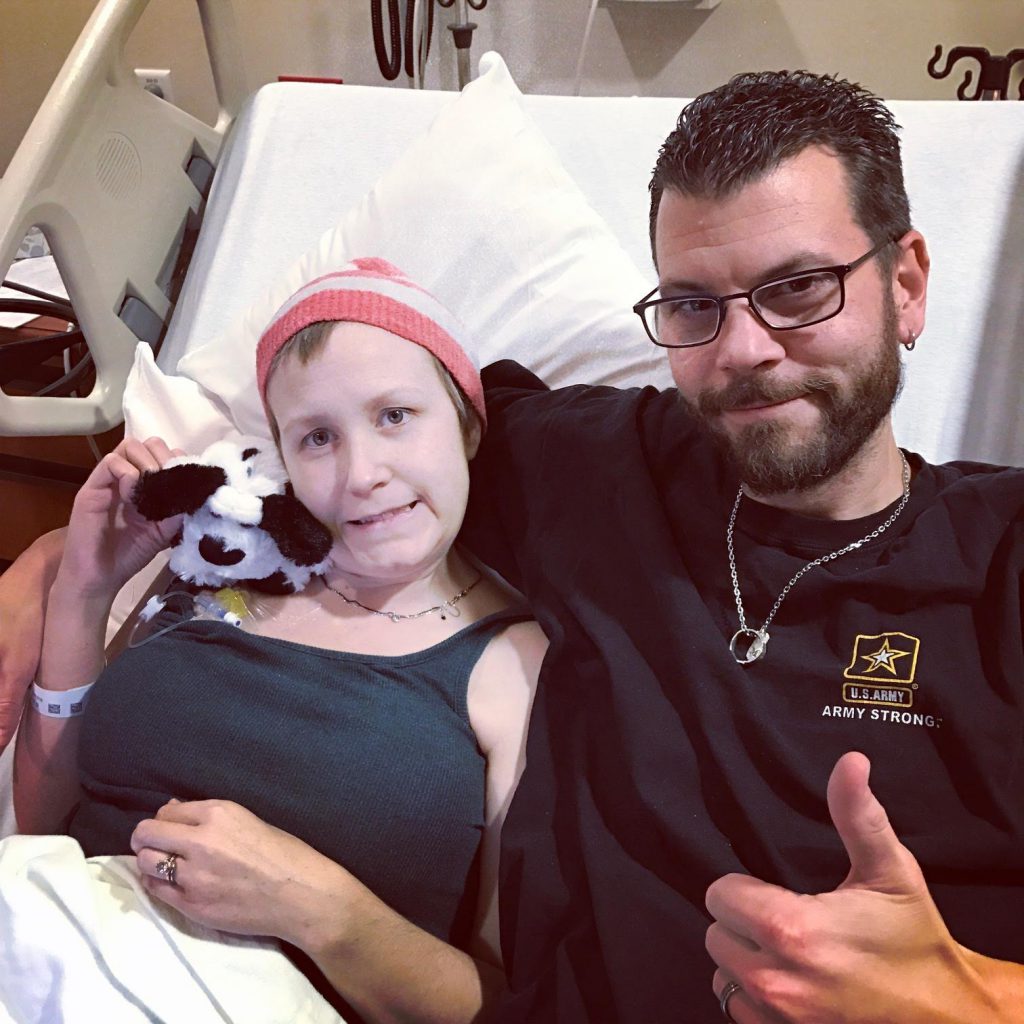 The dog is waving. Mike got him at the gift shop to distract me.