If It’s so Wrong, It has to be Right

The cheesecake I am eating. Pumkin pie cheesecake, it came in a black container so now you can go ahead and debate whether that means Olive Garden loves Halloween in November, or is entirely satanic and that WILL be their color for the holidays. You know, since food containers are what we talk about on the internet obsessively.

Brain radiation officially has codename “bacon day” since I couldn’t eat bacon at the hospital (gamma knife vs. cyber knife – different set up), I wore bacon to the hospital. Why? Because bacon is delicious. Why else? Today was a stressful day full of anxiety and there needed to be something a little silly to go with it.

The day before my radiation oncologist called pretty angry that I had had my infusions on Friday. I had known that she suggested that I not get them (on Thursday, when I saw her), and they I move them to after radiation (going in for infusion right after my radiation today). The primary conflict that could happen is swelling (from doing them on Friday). The radiation oncologist said that they have also shown issues from tissue necrosis from herceptin and SRS radiation. I searched everywhere and could only find examples of this when people were taking Kadcyla (so if anyone knows studies, please share). My oncologist felt that the risk was low enough and I was super nervous about pushing back my infusion (that whole question on blood brain barrier thing) – but when I found out I may have to wait another month for radiation I just about died. We decided to go ahead as long as I was aware of the risks.

I have many plans in my life set up around the 3 week infusions, you set off that plan, it is a domino effect – when you have so little control of your life you try to create as much as you can. Now I have to worry about more issues from radiation, or just need to learn to worry less (hahahahahahaha). Maybe I should pull out all of those meditations I keep not getting around to!

Mike came home and got me to head up to the hospital. His work has been allowing him to spend more time at the hospital with me – which is a full time job I swear.

The radiation techs grabbed me and I didn’t have to change (good thing, because this girl was dressed in bacon).

On the way back I saw a machine showing the relative zone of my tumors on a 3D face: 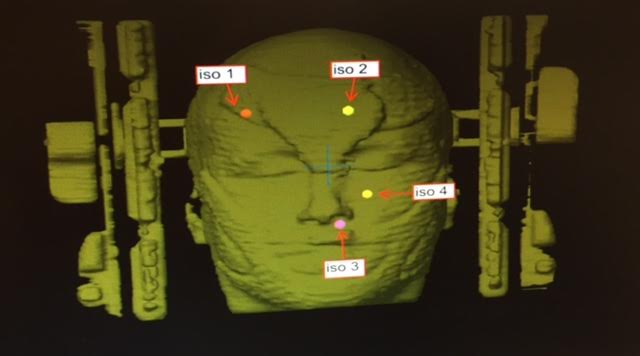 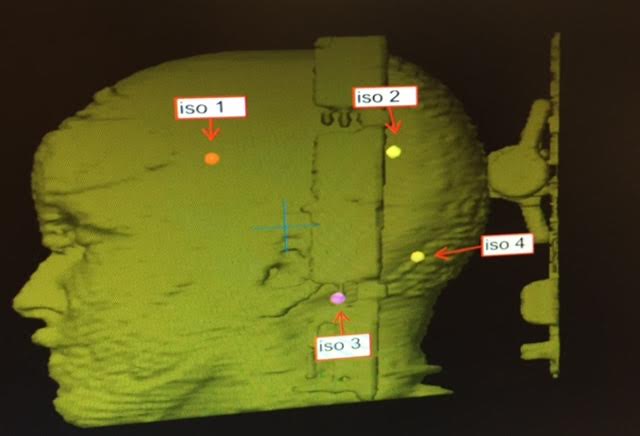 After heading in the team noted that my bacon dress matched the machine, so – here you go: 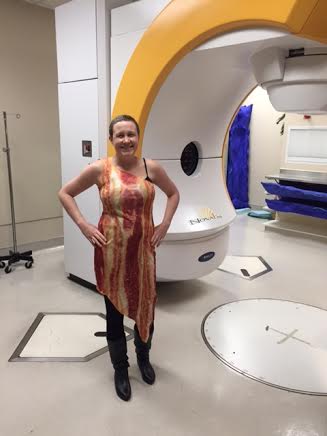 We got me lined up in the machine: 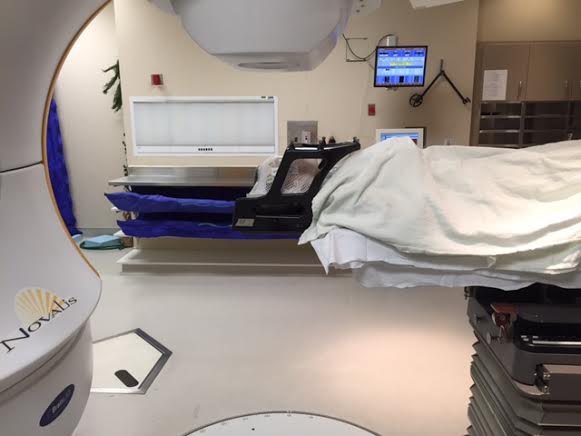 Unfortunately at about the halfway point the mask was sitting on my head in such a way that it was getting super painful. By the final round I was biting my cheeks and holding back my panic. I did have the claustrophobia/anxiety attack I was hoping to avoid. I just needed to make it through a few more, so I kept trying to take deep breaths and make it through. I had tears rolling down my face. Next time we will have to better plan the medications I take. I need to be LOOPY, I was not. 🙁 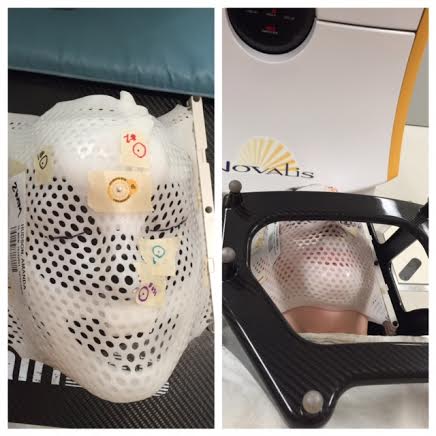