Check Your Sanity at the Door

Home » Updates » Check Your Sanity at the Door

Brain metastases is a new world, and I probably need to explain better for readers that don’t know as much since I am bouncing all over and my brain is just being unsettled (expected right? It has stuff growing in it, of course it is going to be a little all over the place). I may have attempted to get out of driving Fifi the RV to the shop (*cough cough* YOU (meaning me in a statement to Mike) are going to let the woman with TUMORS growing in her brain drive a big ‘ol RV around town. Sure hope I don’t get one of those “dizzy spells,” “don’t worry, they don’t come often…”). It didn’t work. I still drove the RV to the shop, I need to get better at my scare tactics.

ANYWAY, guess what a metastasis or 3 to the brain does? It pretty much takes you out of pretty much every clinical trial ever. Why? Because us brainos screw up their results (we die too fast, cute huh), which means hardly any research has been done on brain mets. So… we don’t know much about what medications DO make it past the blood brain barrier. What dosage your body needs for an effective dose in your brain… you know. Life saving things. They have started to sort of study it, a little bit… because some people are actually living longer with them and they realized they should probably look into it a little bit.

What this means is that if we don’t get my brain mets stable, I will get the “you are out of options” notification much much sooner than my doctor initially hoped (my doctor wasn’t the only one who had this hope, since she may not be the only person interested in keeping me alive). I have been digging and scrounging. In cancerland once in awhile you can play a Campassionate Care card and get access to something that is being studied and isn’t totally proven just yet – something with evidence of success, but not enough to be standard of care. From my understanding, insurance does have to pay in this case. So I am working on playing this card, I have to make the right choice on where I double down.

So, did you know that you could help men and women with metastatic breast cancer, people like me, without too much effort? I give you two options, if you did both, you would be my hero:

The first is write a letter, this letter comes from Beth at Culture of Perfect Motherhood. She was diagnosed at Stage IV, early stage diagnosis hasn’t done her a lick of good (did you know that 6-10% of women are diagnosed stage IV at diagnosis, frustrating). Not that it saves every life, it saves some, don’t completely toss out the mammograms – hopefully someday we roll out better technology (it exists, hey, let’s tell insurance companies that we deserve it). Ignore me, I am chattering, Beth prepped this letter for you to write to the senators in your state (the link also explains the what and the why) – please email, tweet, or snail mail them (here are the people to contact: http://www.help.senate.gov/about/members):

NOTE: if you don’t have metastatic breast cancer yourself, just tweak the letter a little and then send it.

To the Members of the Senate Health, Education, Labor and Pensions Committee:

Unfortunately, the odds of a cure being found in my now-limited lifespan are very low, because so little of breast cancer research funding goes towards metastatic disease, despite the reality that nearly all breast cancer deaths are from metastasis. A study last year by the Metastatic Breast Cancer Alliance found that only about 7% of breast cancer research dollars go towards metastatic research. After decades of the war on cancer, we still don’t know how metastasis happens, let alone how to prevent metastasis or how to treat it once it has already happened.

This is why I’m asking you to include the following provisions in the legislation you are currently drafting:

2. Ensure that the National Cancer Institute’s Surveillance, Epidemiology and End Results (SEER) Program begins tracking when patients with early stage breast cancer develop metastatic disease. Currently, we don’t know how many people who have early stage breast cancer will develop metastatic disease because the SEER program does not include this datapoint. Only 6-10% of newly diagnosed patients have metastatic disease at diagnosis; the rest of the metastatic community is not counted in the database. Adding this information to the SEER program would ensure that researchers will have the basic epidemiological information they need to direct their research towards the most pressing needs.

3. Reform compassionate use access to drugs under development. Patients with a terminal diagnosis may not have time to wait for drugs to be approved, and are willing to take more risks on a drug still in trials because they literally have nothing to lose. They shouldn’t have to navigate the byzantine process now in place for patients seeking compassionate use access to drugs that might prolong their lives dramatically. Additionally, it can be difficult for patients to gain access o these drugs through the clinical trial process because of the restrictive eligibility requirements of many clinical trials, and because of geographical limitations on access to clinical trials.

4. Require insurers to treat oral and intravenous chemotherapy drugs the same. Under many insurance plans, patients must pay enormous copays for chemotherapy given as a pill, whereas IV chemotherapy is considered a hospital service and does not come with a similar copay. The costs of these copays can run into the thousands of dollars and are prohibitively expensive. Doctors and patients shouldn’t be incentivized to choose IV chemotherapy over oral chemotherapy that often comes with less side effects simply because of insurance rules. Many states have already enacted similar legislation, and it’s time that there was a rule providing for parity between oral and IV chemotherapy at the federal level. Senator Kirk has drafted legislation on this issue and I believe it should be incorporated into your committee’s bill.

5. Reform Medicare rules that incentivize older treatments over newer ones. Under existing Medicare rules, doctors are penalized for using newer, often more effective treatments and rewarded for using older, less effective ones. For metastatic patients, many of whom are on Medicare because of their terminal diagnosis, suffering through months of an ineffective older treatment before gaining access to a newer one could be the difference between life and death. Senator Kirk has drafted legislation on this issue and I believe it should be incorporated into your committee’s bill.

At the height of the AIDS crisis, 40,000 Americans died every year, the same as the number of Americans who have died every year of metastatic breast cancer since the 1970’s. It was Congress’s leadership during the AIDS crisis that made federal health agencies take the disease seriously and turned AIDS from a death sentence into a life sentence. I hope that you will consider showing that same leadership with respect to metastatic breast cancer, so that I can live a full life span as well.

Anyway… I set up this event, I accidentally set up a private one that is invite only because I was half asleep when I did it (or we can blame Bob, my biggest brain tumor). The public one is here: https://www.facebook.com/events/1496784453983237/

Please join it. All I am asked is that you go to http://smile.amazon.com and set your charity as Metavivor. Every time you shop they will donate .5% to Metavivor. Which means metastatic breast cancer research will happen and all you have to do is do your regular Amazon.com shopping (if you are addicted to Amazon, like me). 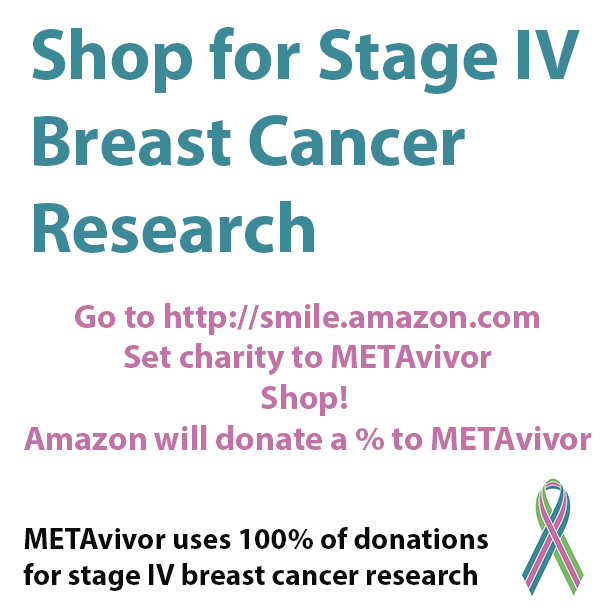 Save this graphic, use it anywhere you would like.

Associated with the event, on October 30, 2015 – I am asking that everyone share, ask their friends, post on Facebook/Twitter for people to make this adjustment. Let’s make this holiday season shopping help the cause that may someday save the lives of my friends. Without some research for brain mets soon, or a lifeline, it may be too late for me. That shouldn’t be ok.

P.S. I know a bunch of people are chomping at the bit. I haven’t a clue when insurance is going to approve this procedure (WTF!?) Stereotactic Radio Surgery (which has a similar margin of error to Cyberknife, just not quite as cool) – they told me a couple of days, worst case 2 weeks. I am being as big of a thorn in the hospital’s side as I can be, but we are at 2 1/2 weeks since we found my particularly fast growing tumors in my brain… and counting…

Also, join me for this chat, I don’t like talking to myself (often) – I will be hosting at @advertisinggeek: 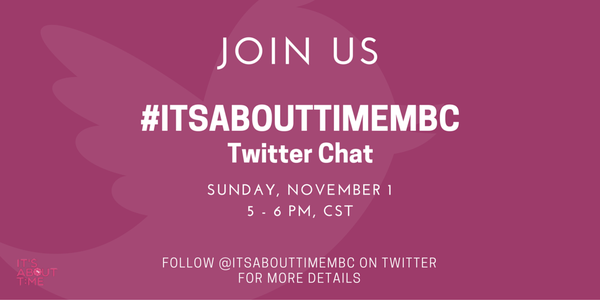