NED and I Can’t be Friends

Home » Updates » NED and I Can’t be Friends

I need to let NED go. Stop hanging on to him, wishing he would ask me for a dance. With how extensive my mets were, being where I am now is nice. NED is no evidence of disease, meaning no visable tumors – not cured when you have Stage IV metastatic breast cancer, but when you beat them back that far, sometimes it can take the cancer extra long to come back swinging. It is also rare.

This is my first scan after kicking back the cancer majorly between my December scans and April. I know it has to stabilize somewhere and that looks like what is mostly going on now.

I had uptake in my spine again, so my spine doesn’t look completely inactive anymore – but when we look at the previous scan it doesn’t look wildly more active than it did before in April. I had a lung nodule that looks like it grew 2 mm and the rest look stable. Overall we are calling me stable. Nothing wildly new, eyeballing things they look close to the same visually to previous scan. A lung nodule measurement can vary a tidge based on how it is measured. I don’t like seeing activity in my spine (who would), but it doesn’t look like the scaryness it was in December. My poor spine looks like swiss cheese though (where tumors were, where they might be).

I have some new plueral thickening at the base of both of my lungs. My lungs have been irritated lately, not sure if it is cancer related or crappy air related. We will see. I am having adventures with my insurance and Advair, so I need to go see my primary care doctor and get back on it and see if they can be less cough-tacular.

My tumor counts dropped 2 points, from 29 to 27. So I am looking stable there too – so now the BIG question. Can I stay stable off of chemo. We are taking Taxotere out today and I am staying on the Perjeta and Herceptin. We are also adding Letrazole back into the mix (blocking estrogen access for the tumors). My lung nodules haven’t responded much, they did a bit to the chemo, but I still think they are my original cancer – which means it isn’t HER2+ (which is what we have been treating primarily). Of course we can’t prove that (with shrinkage from Taxotere, they are extra hard to biopsy). Since I have HER2+ cells means that is my primary cancer type we treat (it is the meaner fasting growing piece).

So, no chemo today (Taxotere). It makes me a little nervous, but I need a break, I am getting weaker, I have less energy and I am tired of being sick. We can always add it back in. Not that we want to, but it is always an option. I am ready to try to see what happens without it, and adding an estrogen blocker back into the mix add mental comfort (although it makes it much harder to figure out what stopped working when the cancer starts to grow again).

So – the news is “stable-ish, lets take a chance and drop the chemo.”

I have been doing a bit more crafting lately: 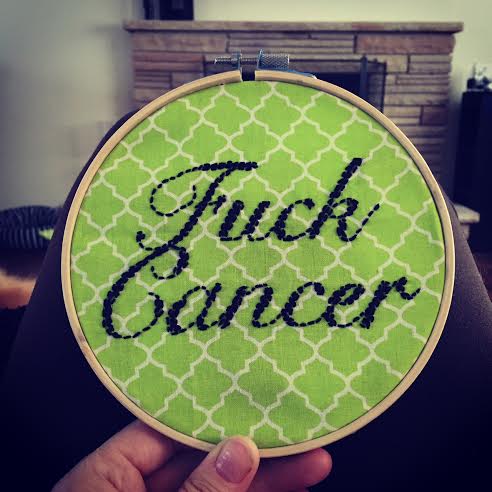 My first attempt at needle point.