My post has been delayed this weekend. Every time I sat down to write it I ended up digging through my medical records, emailing doctors instead of posting or I was just out goofing off with Mike. We turned the trip into “Mandi and Mike’s goof-off-fiesta in Houston.” I turn every trip anywhere into a vacation. I love to travel and explore, it is my life’s passion. We are delaying our trip to Europe (this trip is a big deal to me!). So we can save more money and save time off of work for Mike. I am also hoping we can maybe somehow find the word “stable” on at least one or two reports before we go, and maybe find a few less tumors. So it looks like it may be a fall trip instead of a spring trip (I know a few people are wondering when we are going on our big adventure). I want more time to plan, figure out what we are doing, and do it more cost effectively – with everything going on it hasn’t gotten the attention it deserves for us to do the trip I want to do.

I was stressed to the max on the way to MD Anderson. I was worried if spending all of this money going to another state to talk to a doctor I had never met was worth it (I was raised by a CFO/accountant – I count my pennies sometimes). Trip planning just didn’t seem to want to go my way. I waited to know if I was going to start chemo to book, I still decided to go. I also managed to back my car into a cement pole in the parking garage on my way out of work the day we were leaving. I was distracted because I had been calling my oral surgeon’s office and pharmacy trying to figure out what happened to my antibiotic prescription for my ONJ so that I didn’t run out while I was out of town.

I had a pure meltdown when I got home. Which means a panic attach for me. Those usually involve me working myself up to a point of hyperventilating and having difficulty breathing and lots of tears. I am a lot of fun to be around when I get to that point. Unfortunately Mike called me in the middle of my panic attack which didn’t help his day any. He posted something on Facebook about having a crappy day and I am pretty sure everyone thought I was dying.

I pulled myself together. Finished getting packed, Mike got home from work in one piece and our friend John drove us to the airport.

We didn’t get to the hotel until 1:00 AM and managed to sort of fall asleep around 2:00 AM. Our hotel had a strangely lumpy bed. I booked the hotel because it had really great reviews online (which I now think were faked a bit – which turned into me getting super aggravated on Twitter a couple of days later when I found out they had dropped their rates to about 1/2 of what I had paid, they told me I was locked in on my rate and there were all sorts of lovely issues with the room/hotel – so be a bit aware the Hampton Inn & Suites Houston-Medical Ctr-Reliant Park reviews are missing a lot of details… They had told me the discounted medical rate wasn’t available because they were almost sold out, but the hotel was pretty empty most of our stay. I may write about it more later). My appointment was at 8:00 AM to do the new patient paperwork etc. We got dropped off via the hotel shuttle at the main MD Anderson building and discovered we were supposed to be at the Mays Clinic. We hoofed it to the Mays clinic and got checked in. 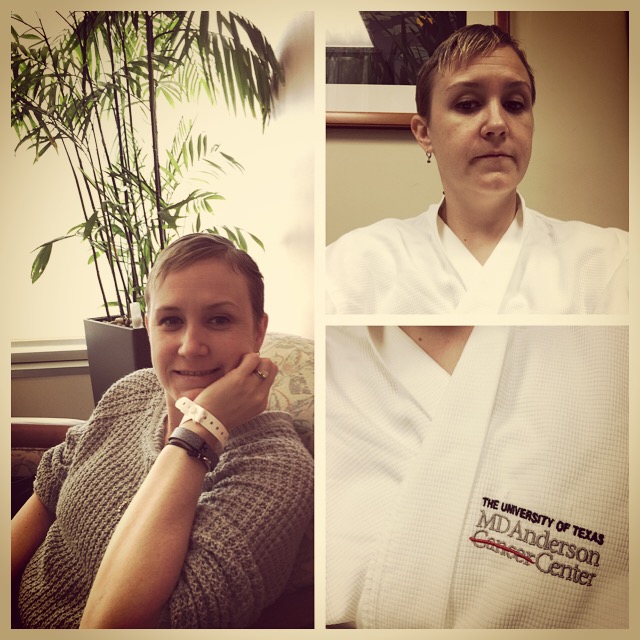 They give you fancy robes instead of hospital gowns. I felt classy.

I met with the lovely PA who explained she had spent the evening before and the morning reading all about me (but somehow missed the saga of the lung nodules, so we covered the saga). I gave her my head to toe “blah blah blah ouch ouch ouch” and she told me to make sure I got my questions in when she brought in my doctor (she made it sound like he is a yapper, which is fine, I am a yapper… apparently he was more of a yapper). Dr. Murray came in and we chatted. I put Mike in charge of notes and he cheated, he recorded the conversation. Which was helpful for me, because I go back and replay it in my mind normally anyway. This time I have the full replay (I was also able to send it to my family – since I wasn’t a fan of everyone flying down, not that I wouldn’t love them being here, but it is a lot of money for a lot of “dunno,”)

The problem was – I was missing the chat with the nurse. She mentioned spine/bone not being the best spot for HER2+ testing… Which prompted an email from me to Dr. Murray over the weekend for further explanation.

When I met with Dr. Murray felt strongly I was on the right regimen NOW. He felt I should be on a HER2+ regimen first, ER+ secondarily. This is what I was struggling with since I was rediagnosed. I was being treated for ER+ and the HER2+ was set aside because I had to do chemo in order to access Perjeta (insurance requirement for now, they are trying to change it, and even my insurance company is being odd about it). He strongly recommended my current chemo regimen. We discussed that if it is unsuccessful I should go on TDM1 (Kadcyla) if it is successful, I switch the chemo with a hormone blocker – this time we go at it from multiple angles. Not just the estrogen one, the HER2+ characteristic is making it grow too too fast.

Then came the double whammy.

Both ovaries that had been removed had tumors in them. At least in the slides that MD Anderson received. My head was swimming. Just like my weird PET-CT readings (oh hey, we will note this or not and then note this or not). The radiology department is one of the reasons I started to ask questions… now I know that I need to worry about all of pathology reports… I am tired. Tired to tears. I have cancer a lot of places and we are just getting started. I thought we needed to know where it is and how much I have so we have something to compare to when I have treatments.

I had metastatic breast cancer tumors in both of my ovaries. Small ones. We are talking millimeters. Maybe no one cares about millimeters at Huntsman? I have every single paper written on me in the last year from the Huntsman printed. I brought them with me to MD Anderson along with my scans. I pulled them out and found the pathology report on my ovaries.

Huntsman had noted no malignancy in the right one. My left one they noted a 3 mm one, which they had subsequently tested the HER2 status on (which MD Anderson reported on). That one came back borderline and recommended a follow up test. I didn’t locate a follow up test, so it appears my metastatic cancer is all over the board, and we didn’t try to get that additional information.

The oncologist at MD Anderson did have the various lab readings in our discussion and had still felt strongly about HER2+ treatment was definitely the route for me.

I was happy to know we were now on the right track. Honestly, after the crap recovery week from chemo, overall I have been feeling better this week. So I am guessing that it is benefiting me, but I am again frustrated that information about the extent of my cancer spread wasn’t shared with me (and that the hospital missed some of it). I am turning this information back and forth in my brain and haven’t found the place where I know how I feel about it.

My oncologist at MD Anderson said I can email or call him anytime, he is happy to help. He also said he can act as a consult for my regular oncologist, which gives me peace of mind. Knowing I have someone to help me with those extra questions, that can also help us wade through the confusion and uncertainty that comes with cancer treatment. I already emailed him about the nurse conversation about the spine biopsy and HER2 and he responded!! He told me that frequently it can give a false negative response and that I am fine since it gave a positive response.

Now for the wild wild adventures of Mandi and Mike in Houston: 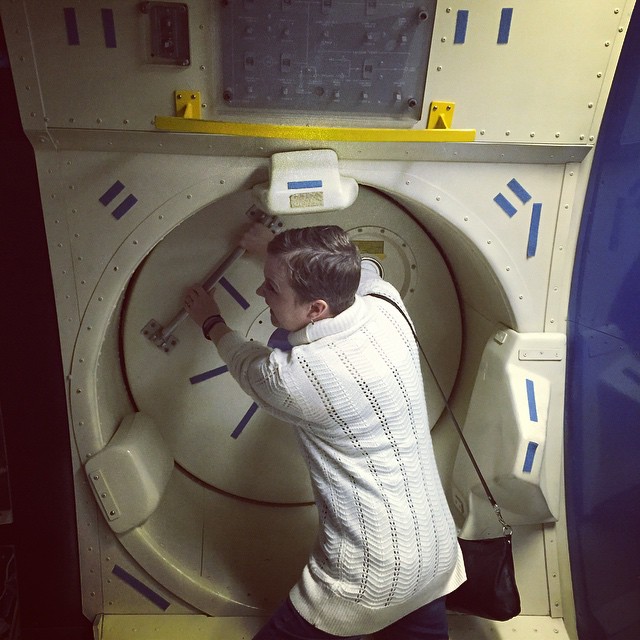 Houston, we have a problem. I am trying to escape the airlock without a space suit. 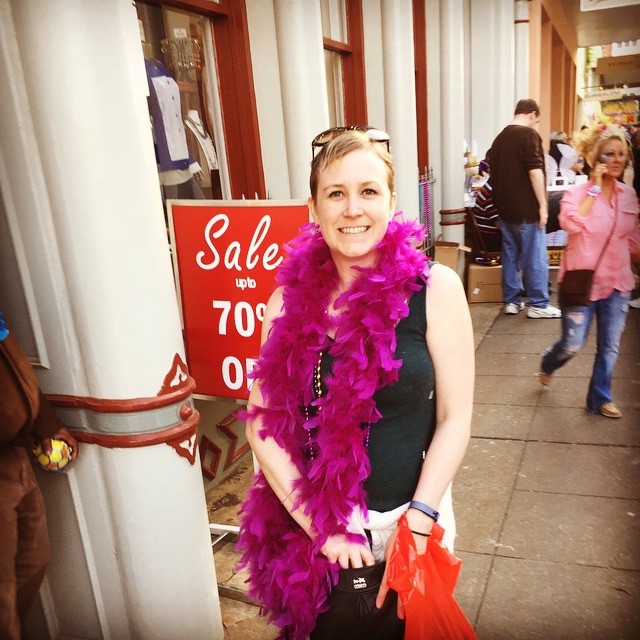 We found Mardi Gras in Galveston. I kept my shirt on… bilateral mastectomy and all. 😉 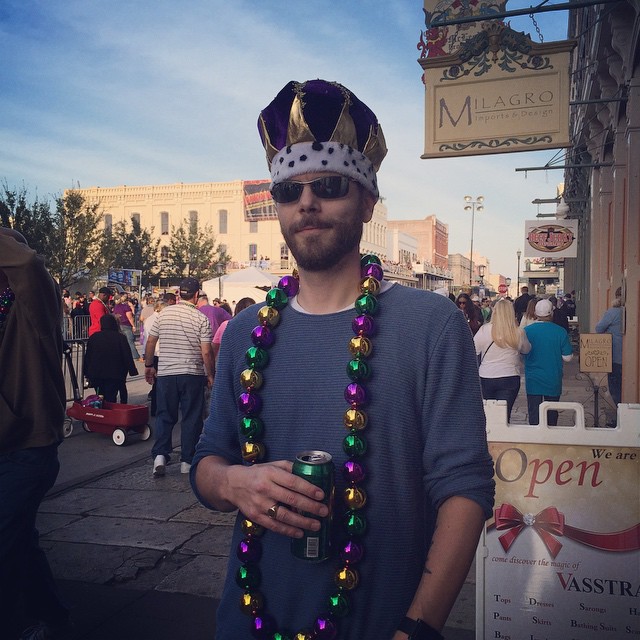 The best part of Mardi Gras was this. Mike at Mardi Gras. 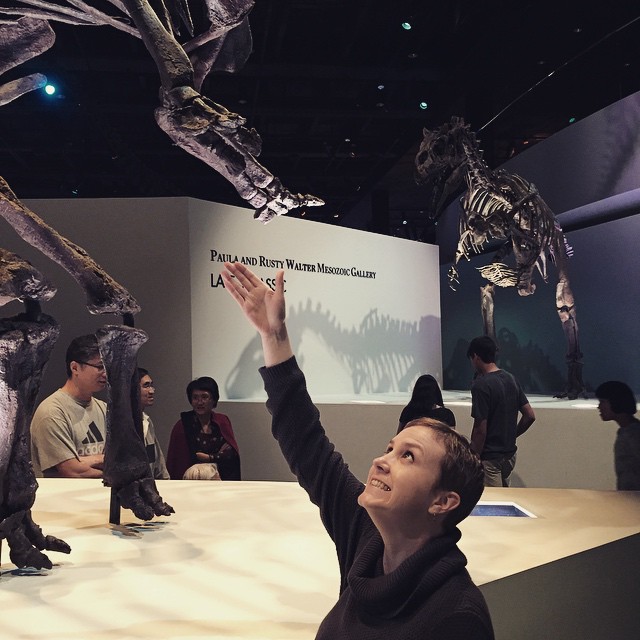 My hair is falling out. I give it a few more days before I have to shave it, for now I am clinging on to the thinning bits that are left. 🙂.