My Clavicle and I Can’t be Friends

Home » Updates » My Clavicle and I Can’t be Friends

Cancer is the arch enemy of a Type A personality.

Disorder. Surprises at every corner. Plans that go awry.

I had a count in my head of how many tumors we needed to knock down. What my tumor load looked like. We knew there was a new guy on T12 that was noted from the PET-CT. What I didn’t seem to know, was that I have one in my right clavicle and several throughout my ribs. Luckily my clavicle hasn’t been hurting me, I have been getting stabbing pains in various spots throughout my ribs, but ignored them knowing I had bigger fish to fry (plus I feel like a hypochondriac anymore).

ARGH. I was confused and lost after my oncology appointment this morning when I should have been elated. Nothing went wildly crazy while we did radiation and waited to pull out my ovaries. We have a good baseline for my Femara stuff now. My lymph node spots shrank and those were the ones that creeped me out the most for some strange reason, but when we ran through it I saw the word clavicle and I latched onto it. CLAVICLE?

I sort of went into a weird shock and didn’t ask the right questions during the time we had with my oncologist. She told me things looked steady enough to stick with the plan to do Femara and see what it does. She is confident that it will do well and let’s get ‘r done.

I asked that they release my scan where I can read it (usually I have to go back and read them when something surprises me, so it can sink in). I did my Zometa infusion and headed off to my work holiday party (the white elephant exchange was a vicious battle, but watch out people, I have my own kit to make an ugly sweater when needed). After I got home from work festivities I called Mike to please come home because I needed to tell him what was going on and talk through what I was trying to process.

My nurse released my scan and I read it through and understood why we were seeing me in a good stable place, that is exactly what it said! I then read the spot where my clavicle and multiple bilateral rib mets were the same also. I sent my oncologist a note through the interface next to the report where you can send a question (how neat is that?) Asking if they had been in the first scan and not noted, or if they were new and the second radiologist was confused. Shortly after I sent the note a nurse called and let me know she verified with my oncologist, they had been there initially, but weren’t noted in the scan notes.

We actually sit and look through scans together, so obviously the rib ones outside of the bright one noted before didn’t stand out to us when we looked, but this time we definitely saw the clavicle.

My brain is trying to wrap itself around what looks like a lot more cancer in my body (to me). What some people call tumor burden… the more tumor burden you have, the steeper hill you have to climb to knock it back. 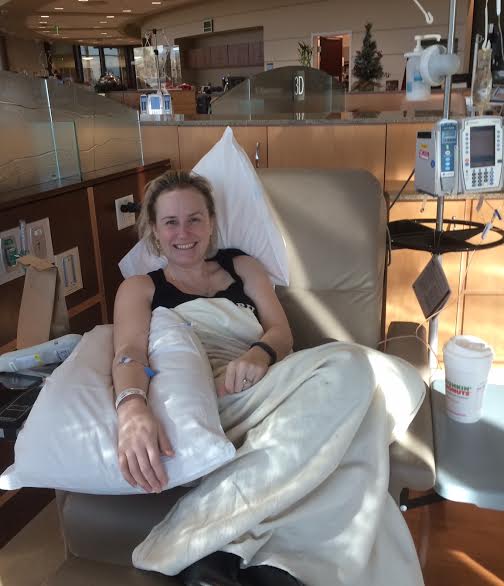 Cruisin’ for a Zometa infusion (without makeup :-O)

P.S. The nurse from the study that I have been trying to get into hasn’t called me or emailed me back. :-/ The doctor had initially responded, so I sent her an email also, but she is off for the holidays. We are going to see what happens after the holidays, if that doesn’t work out we will work out a plan B.