Hello Menopause. Nice to Meet You.

This isn’t my first brush with menopause. I did a temporary version when I was in chemo, my doctors expected it to be temporary since I was under 35. I have electronic access to my medical records and labs, so when new ones go up I get an email. I didn’t realize my oncologist had ordered a test to check on my menopausal state (measuring estrogen). The results look like I was still pretty pre-menopausal – I guess a 30 would have been extra-super-duper pre-menopausal:

Needless to say, the last minute check that my ovaries were still working before my surgery suggested that they were.

Tamoxifen also gave me every side effect they could list related to menopause, so it will be interesting to compare the two in the upcoming future (blocking estrogen vs. complete lack of estrogen… hmmm). Of course we were intentionally putting me into menopause. So I guess that makes it a little different.

The surgery I officially had was a “unilateral salpingo oophorectomy.” This means they removed my ovaries and fallopian tubes from both sides. My oncologist and OBGYN at Huntsman felt like a full hysterectomy was an unnecessary risk – and now that I had surgery I am glad it wasn’t a bigger surgery. I am surgeried out.

While we waited for me to go into the operation room we did one last final wave goodbye to my ovaries. Mike was not present just yet, since he needed a root canal and ended up having to get it while I was in pre-op (teeth grinding at night from stress is dangerous to your teeth folks). Apparently I wasn’t supposed to have my blue hat just yet (they took it off when they saw our photo brigade). I was hiding my bedhead. I had showered the night before and rolled out of bed to head to the hospital. Plus it gives the extra “surgery chic” look. 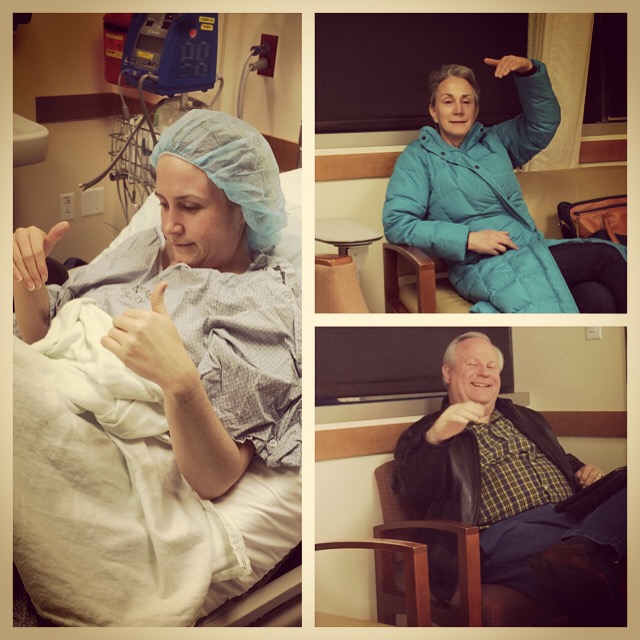 I did not feel amazing right after surgery. I wasn’t about to hop on any stages, sing, do jazz hands or any of those things I normally avoid after surgery anyway. I warned them my nausea can be a tough one, but they seemed to keep it under control while I was at the hospital.

We got me home and I went to bed for awhile. I eventually woke up and relocated to the living room for a bit. Everything was making me nauseous. Water. Looking sideways. I kept carefully hobbling to the glass doors (holding a pillow around my belly) and poking my head out into the cold gulping for air. I took my anti-nausea medications and after I ate dinner (my friend’s dropped off my favorite ramen soup) and it all just came up. Gross. I complained to my mom in true grown up style and she explained that my digestive system was probably still paralyzed post operation. 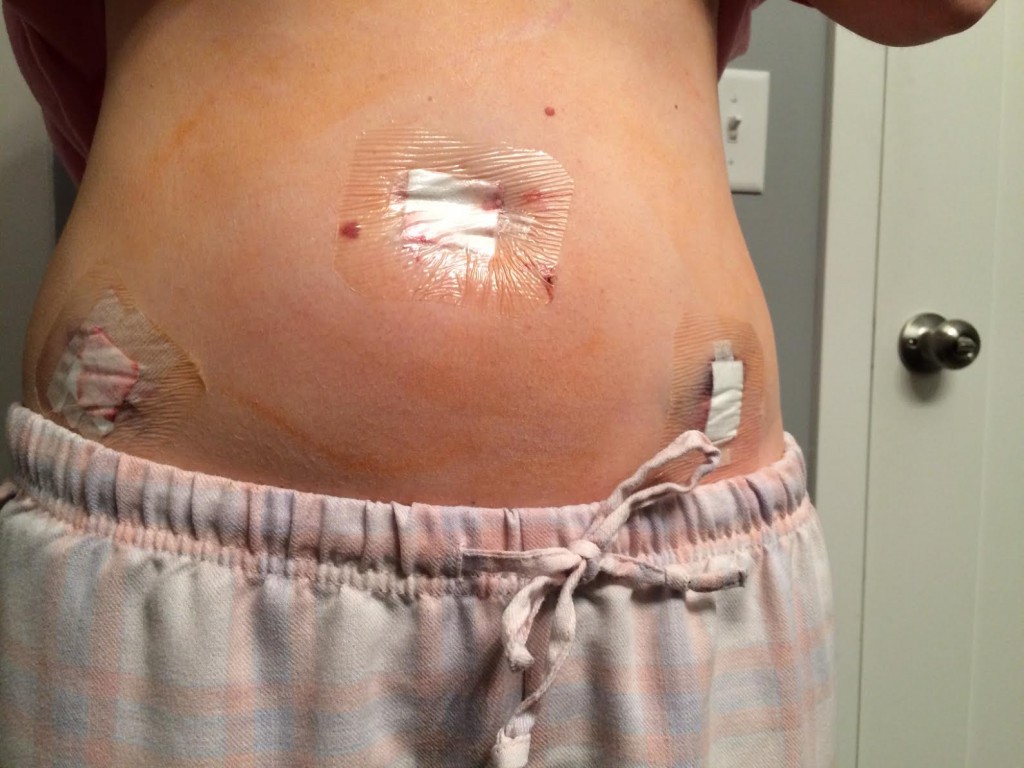 Thanksgiving Day Mike’s mom came over early (like 6 AM early) to put a turkey in our roaster oven (I have one that you cook the turkey outside of the oven that I got a few years ago because Mike really wanted a turkey after we went to Mexico for a getaway when I was in treatment). Mike got up early and hung out with his mom while the turkey baked and she proceeded to make a bunch of delicious pies. There was a bit of shock when the turkey was perfectly done, two hours early… (that turkey roaster keeps temperature really well), d’oh. Luckily the rest of Mike’s fam that was coming over had the food they were bringing ready and we had an impromptu earlier-than-planned Thanksgiving dinner. Mike got a few of his favorite things (turkey, mashed potatoes, and gravy) and I got to sleep (and eat pie). Mike’s family was lovely enough to do all of the cleanup and prep, so we got the full Thanksgiving experience without the work. I am sure Mike’s mom needed a long nap after 10+ hours of baking. 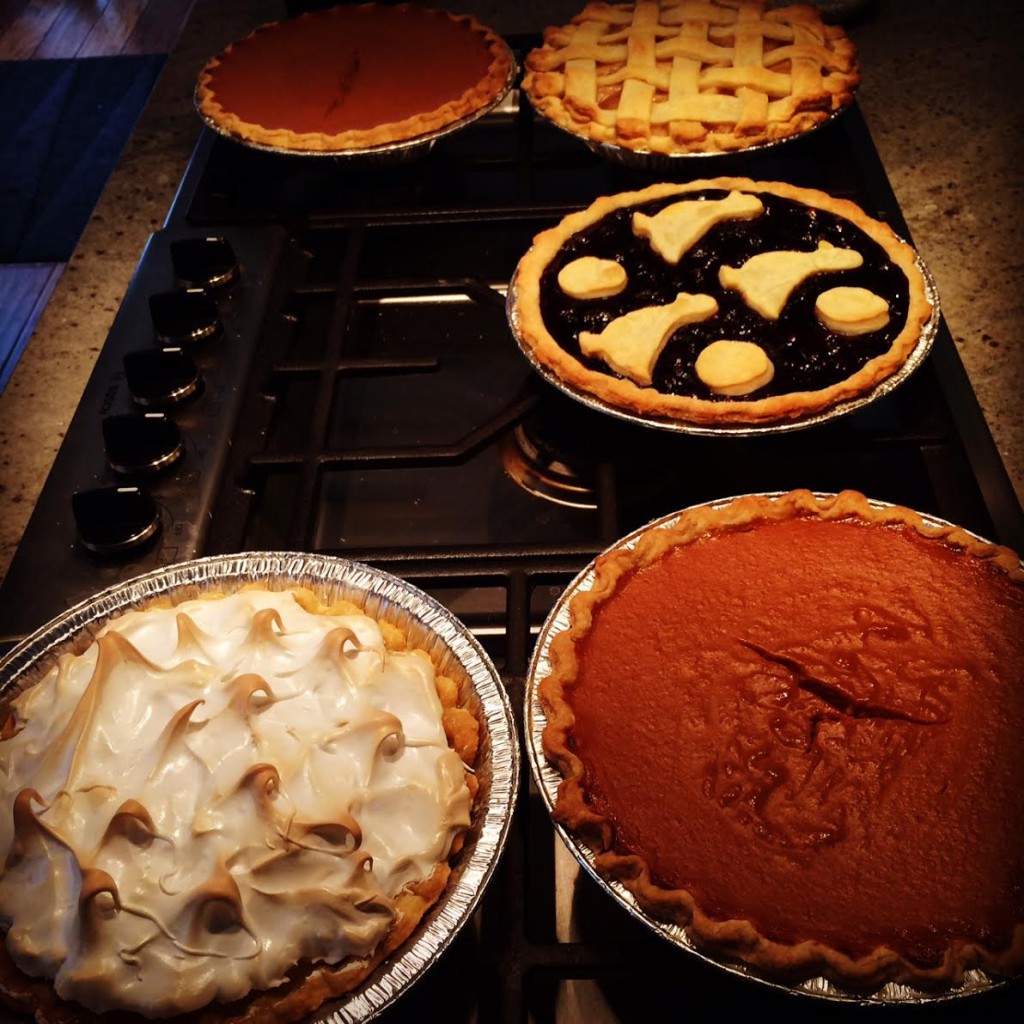 The first couple of days I started to wonder when menopause was going to kick in. I felt fine. Hot flashes hadn’t started back up since I had stopped Tamoxifen. Emotions felt ok. I was wondering if everything was magically going to be easy. Two days after surgery I remembered I still had a uterus and that I was going to have a final cycle. FIRE SALE! Oy. I think that is about when my body realized estrogen was gone. Today I discovered I lost a $50 bill that Mike had left for me on the counter. This started with me searching the house fervently super pissed off that I lost it (and grouching at Mike for having left it out when I couldn’t put it away in my purse) and ended with me in huge tears and sobbing that I had lost it (with Mike comforting me and talking me down from my hormone induced craze) – I still haven’t found it but, oh goody, menopause… I found you!