What to do With Mandi’s Estrogen?

Home » Updates » What to do With Mandi’s Estrogen?

The hippity hot topic the last couple of days is my precious estrogen. I met with the OBGYN on Wednesday – that makes 3 days at the hospital this week, WHEW. I guess I should get used to it. I will be there every day next week (but not for several hours each visit like these). He was a dear sweet soul who checked to see if I was healthy enough for an oophorectomy or hysterectomy and talked me through the benefits of what we were about to do (and made sure I understood the heaviness of what I was about to do).

Apparently I am actually at a higher risk for ovarian cancer because I had breast cancer so young, and no children (even though I did not have the BRCA1 or BRCA2 mutations), but not nearly high enough of a risk to really warrant removing my ovaries. The benefit to treating my metastatic breast cancer is really big though, which is why we are doing this.

He offered to do the surgery Friday. Which I was totally prepared to do… he then suggested Tuesday. I had a few concerns on what my radiation oncologist would feel about it… they said it should probably be ok, but that they would check. So we put me on the schedule for Tuesday with the plan that I would still get radiation the next day.

When I hadn’t heard back that day about what my radiation oncologist felt on the matter I called the OBGYN’s nurse and they told me they hadn’t spoken with her just yet. I called my oncology nurse and chatted through everything that was on the docket (since I wouldn’t be needing a Lupron injection if they are yanking my ovaries a couple of days later). My oncologist and my radiation oncologist ended up having a conversation and they decided that they actually WANT me to have estrogen coursing through my veins while I am doing radiation – why? They want my cancer cells growing more quickly, because radiation is more effective when the cancer cells are growing faster. Yay. Go cancer… go? Which is why they don’t want to radiate you while you are in chemo. My radiation oncologist also had no desire to radiate me in a zone where I just had surgery either.

This freaks me out. A little bit. I get it. I want to do it, but I have all of those other tumors floating around in other places and those growing and sending out new cells can keep a woman up at night (lungs and lymph nodes all over my chest and neck). I do understand that the most dangerous (and painful) tumors in my body are the ones sitting in my spine, and they are growing pretty fast. My oncologist had me stop Tamoxifen (it obviously doesn’t work anymore, my cancer cells learned how to work around it).

When my oncologist and I were chatting about all of this over the phone I did ask if they ended up getting enough tissue out of the biopsy to get the ER+/-, PR+/- and HER2 info. It turns out they did manage to get those details out of the tumor cells they pulled out. I am still VERY ER+, which means my cancer cells love love love estrogen. Which means that I have a good chance that I will be more responsive when we shut down my estrogen. The question is … When?

The HER2 test came back inconclusive, so we are waiting on another test. I was negative last time, so it would be pretty creepy if they learned that trick now. Heck, cancer is creepy though.

The feedback I am getting now is that I had to wait a couple of weeks after radiation to get my ovaries out (I need to confirm with my radiation oncologist). So tentatively we scheduled my oophorectomy on the Tuesday before Thanksgiving. Which means I can worry less about work, relax more, but I may be less fun times with my family (but they have to love me, it is written somewhere… family MUST love a cranky sore Mandi. The end. They also must forgive her is she doesn’t make it to turkey dinners…).

The discussion now is if/when I get a Lupron injection to suppress the estrogen production of my ovaries right after radiation is complete while I wait for surgery. The injection takes me out of running for the study I am trying to get into – until it is out of my system. So I would have to give it a month and then try to get in, or not get into the study. I really want to get into the study, but I am not sure that I want estrogen running rampant in my system for 3 extra weeks just to get in. It is an interesting conundrum. So… for now we will schedule the injection when I am ready.

Today I had my radiation dry run. Which means they put you in the room, line you up and take x-rays where the radiation machine would be sending out radiation-rays and make sure they have you where they want you. The tattoos are used to line you up to various lasers they have coming out of the wall, when you are lined up to those lasers, the machine/techs know where your body is in the room and they rotate the machine around you.

They also draw all over you with a lot of markers.

I am not sure how they didn’t get all of my tattoos mixed up, but spotty Mandi and smart technologists made it through the day. The photo they have of me in their computer to verify it is me, is  from last time – shortly after chemo, pale, bald and super cute. (I may have made up the super cute part).

After the test run my mom and I had lunch. Mike was working on making it up for my Zometa infusion (since the chemo room is truly the place to be!). We got back and I was assigned a private room. Yeehah, back in the olden days we were in chairs that were stacked right up on top of each other and you played nice with your neighbors. Which was actually kind of fun, sometimes you met some really nice people.

I hadn’t had labs done that day (because this was Zometa – not chemo). So the nurse wanted to make sure my kidneys were super ok before she gave me the full dose. This meant I got to lay in a hospital bed and work (ahem, I mean I was not working… I don’t work from the hospital. Whatever, they have wifi). It took awhile to get the results (and get my order from the pharmacy). The infusion actually only takes 30 minutes (but I guess they told me 2 hours, because that is how long it took between labs and getting the Zometa ordered). Once the infusion was over we ran up and grabbed paperwork, a prescription I needed, filled it and headed home. I then took my post-almost-full-day-at-hospital-nap.

Oh. I also wore the t-shirt made by Dov for my first stage IV visit to the infusion room. 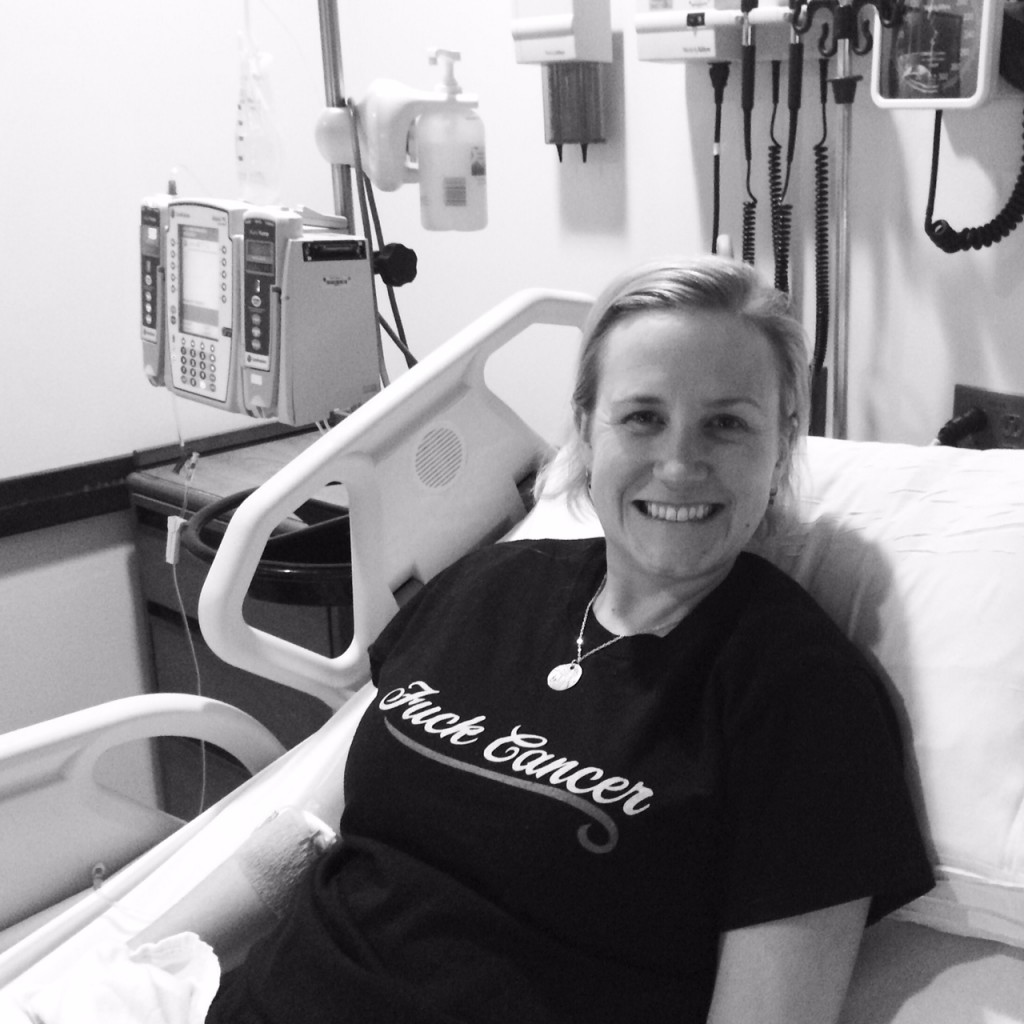