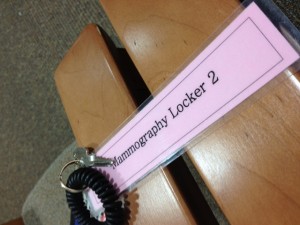 That is totally what I wanted to hear from the radiologist right before he does an ultrasound to check a lump.

I had my quarterly check up, not stressed, not one bit. I had my favorite purple smoothie in hand. I had had a cough thing going on that had been chest x-ray-ed antibiotics administered the previous week and that had been the only random thing weighing on my mind. I wasn’t expecting my doctor to find a good sized lump hiding under my implant on my noncancerous side. Quite frankly I was pretty embarrassed that I had not noticed this lump myself (very embarrassed, how the heck did I miss that one…?). She drew a big circle and figured we do the whole “check it because it is the right thing to do” and the rest of that appointment with her was just dandy.

I was grabbed for my visit with the mammogram/diagnostic crew and here is where it got weird.

I sat in the waiting room in my gown. Everyone got pulled in for their mammos and I waited and waited and waited and a tech grabbed me and pulled me in the room with a mammography machine, because she needed to ask me a quick question. She asked me where the lump was located. I showed her and she explained that the radiologist and my doctors (they had pulled my plastic surgeon into the discussion) were trying to decide if I needed a mammogram or an ultrasound.

What, what? A mammogram!? I thought I never needed one of those. I don’t have any real “boobs.” That was the ultimate “no boob” bonus, or so I thought…

She put me back in the waiting room and I got regular updates that they were still deciding, an hour passed. The tech eventually grabbed me for my second mammogram (I guess technically my third because I had two on my day of diagnosis). She made a kind of half attempt at the thing because I guess she didn’t know beforehand that I had an implant and that somehow changed everything (I guess she thought she was just putting in the flap, not the flap and implant). The lump was sitting up under the implant in my armpit area, so I have no idea how they would have gotten it into the machine anyway. I made jokes about supposed to be “getting out of these mammogram things” and she didn’t think I was that funny, but by now I wasn’t in the best mood, so maybe I just wasn’t very funny.

Once she made a quick attempt at getting an image they put me back in the waiting room.

I was eventually told they would go ahead and do an ultrasound and this is when the radiologist walked in and told me. “I won’t be able to tell if this is cancer or fat necrosis from an ultrasound, only from a mammogram.” He told me that they could do an MRI, but that fat necrosis also absorbs dye just like cancer and can end up looking the same too. The only definitive way to tell was a mammogram (I got the sense that this was the argument he had been having with my doctors for the past hour). I asked him if I should go back in and try to get it in the mammogram machine and he just kind of stared at me.

I looked back at him and a couple of tears started to form in the corners of my eyes.

Telling me you can’t tell is saying it “might” be cancer and 30 minutes ago I was 99.99% certain there was no possible way I had cancer clear on the other side of my body underneath an implant in a breast that doesn’t have any breast tissue…. but now… now you can’t tell the difference?

My first response is that we have some major issues in that case because I have a diagnosis of fat necrosis on my cancerous side, and no one has ever done a mammogram over there, so maybe we need to go shove that one in the machine too just to be sure (hey, I was all about the mammograms at this point). I asked if he would just biopsy the darn thing and he told me that it was too close to the implant to risk it when the chance of it being cancer was so low. He eventually decided that it wasn’t really a lump because it only looked like a lump from one angle and when palpitated it didn’t feel like cancer (because now we can just feel cancer? Although it is a soft lump and didn’t really feel like the cancerous lump…). Which, again, fine, I didn’t expect it to be, but this wasn’t exactly how I thought he would go about it.

Him: “It is saline right”
Me: “Nope, that is silicone”

Then it was the fact that the implant was against the skin without any tissue and not a lump at all… he wasn’t trying very hard… (you can really feel those lumps with your fingertips, they are definitely there, and big). When he got the lump on screen it also did not have “cancer like qualities.” Which it formed practically magically overnight when it did form, so I never had expected it really to be cancer either, but now I am a little freaked out because apparently you can’t tell from an ultrasound..?

He proceeded to tell me that I really didn’t have much to be concerned about and did he properly address all of my concerns? Wait what? I just said yes, arguing wasn’t going to get me anywhere and he clearly didn’t want to be looking at me in the first place and trying to convince me there was a valve in my silicone implants rather than a lump in there had sort of impacted my opinion of his medical expertise today already.

The Huntsman has a lot of amazing staff, this is not my normal experience at all. So please don’t let it impact your opinion. I think I caught someone on a bad day… I have bad days, we all have bad days. Maybe he was just trying to be more straightforward with me than the previous radiologists, but that is a little eepy.

I had been going back and forth on having a small revision on my right side to take in a little extra flappy flap over there and see if they could go in and remove these lumps on the cancerous side because they seem to be a never ending source of fun. I am thinking more about it lately and may explore that option sooner than I had planned.

This all left me just a wee bit frazzled. 🙂

P.S. I don’t really think any of them are really cancer, so no freaking out. This was just a headache of a day..