Home » Life » Pain in the Neck

Pain in the Neck

On the High Line in New York City

I feel like a pain in the neck, but really, I actually have been having pain in my neck.

I got a cold after my trip to New York last month (yes, I went back to NYC, luckily it remained adventure free this time, unlike my crazy trip in October). On my flight out the flight attendant pointed at my lymphedema sleeve and asked if I had “earned it.” I stared blankly at him for a moment and once it connected in my brain I blushed and said “yes.” He and I chatted later on during the flight, he had recently finished treatment for colon cancer (he didn’t look a day over 40). He was very sweet and I realized that my sleeve is a giveaway that I had cancer, but I did “earn it.” So be it. The cold went away and then my body started acting up.

Every ache and pain in your body is under a microscope as you navigate life after cancer treatment. Aches stand behind a megaphone shouting directly in your ear. My past two weeks have been filled with a body not quite wanting to be agreeable. I had a lump show up in my right armpit (cancer-free side), I let it sit for a couple of days and gave in and called one of the nurses at Huntsman. An appointment was booked and the appointment was subsequently moved around a few times. Once it was moved by me because of a meeting and it was moved few more times because of difficulty squeezing me in and emergencies that came up (my surgical oncologist is a very busy woman, it took me 14 days to get in to see her the first time). I am still never certain which oncologist to go see when something pops up (I have three, a surgical oncologist (surgery to treat cancer), a medical oncologist (chemo to treat cancer) and a radiation oncologist (radiation to treat cancer)).

While I was dancing the appointment jig another lump showed up in my left side. Both went away by the time the nurses called and said that they could just go ahead and schedule the ultrasound. At that point there wasn’t much to look at so we opted to delay any tests unless another lump showed up. While my armpits were being lumpy also had some neck and back pain show up. It was bad enough to bring a few tears to my eyes here and there. It hasn’t been debilitating (didn’t stop me from lifting things), but it has been enough to make me uncomfortable when I sit still for an extended period of time. I have a new lump in my right armpit today (third one), so I guess they may have something to look at next week. This has all been combined with some fatigue so I am just one big ball of tired sore lumpy nerves (I am just one huge party).

This time I have just wanted to ignore it rather than go in, but my family members don’t support that strategy. I will get to go see a doctor one of these days soon to rule out the scarier possibilities of my back pain, neck pain and lumpy armpits. The spine and lymph nodes are the more common spots for breast cancer metastasis if it does occur. The lumps in my armpits are just strange because they keep showing up and going away (a persistent lump is something to be a bit more worried about, I am just more curious about them at this point). A year and a half ago I would have ignored all of this (after two weeks of back pain I may have given in and gone to see my general practitioner), but now every ache has a new meaning and a taste of fear tied up in it with a pretty little pink bow (I did seriously try to avoid going in about my lump in my breast, because there was just no possible way that it was cancer *sigh*).

I am more sensitive to pain than I was before treatment. I don’t know if it is related to nerve damage from chemo or if I am just hypersensitive now. Colds are about twice what they used to be and my arthritis seems to have a bit more of a bite. Which also has made me decide that I am now a crochety old woman with nothing to do but complain about my medical maladies. Which makes me a pain in the neck.

Life has been good beyond my little worries. I am enjoying the rewarding challenges of my job (it is good to work for a nonprofit company that makes a real impact in many people’s lives), spending time with my husband and just enjoying life in general (don’t take my posting about aches as a dissatisfaction with the awesome things in my life, I just figure I should record the realisms good and bad as they occur – the blog has been a way to get things down “on paper,” my public therapy). I spend more time sitting on the back porch enjoying a little sun on my face, smelling a few more roses and sneaking a few extra snuggles and kisses from my hubsters.

There are a lot of people that survive cancer treatment, I plan to be one of them. After freaking out over a bad pap and three lumps in what is now my left breast, I am exhausted from letting myself worry too much and I choose to be optimistic instead. I will continue to live like I am living and take it from there. 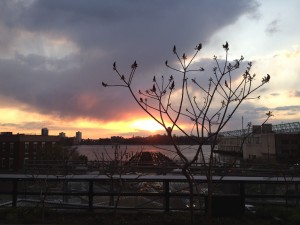