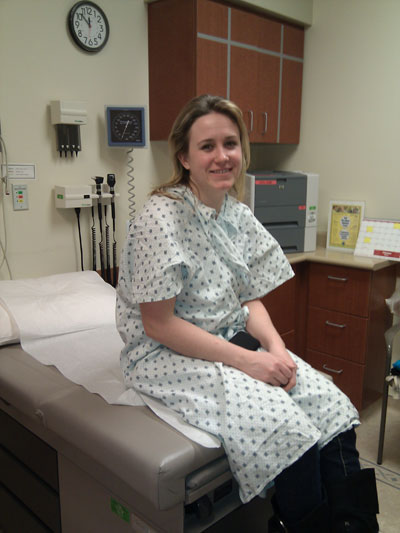 I look so excited in my fancy new gown at the Huntsman Cancer Institute.

Sorry for the delay, I am pretty drained after 6 hours at Huntsman Cancer Institute. Needing to be there at 10:30 I figured I would be out in time to eat a late lunch which turned out not to be the case. Luckily there are kind volunteers with juice and snacks that go around. They seem to know you are in for a long day, we just didn’t quite know that. From today, this is what I know:

At this time I have a double mastectomy scheduled for January 28th, 2011. I am not sure what time yet, but it was the soonest they could get me in for a larger surgery – if I change the surgery to a lumpectomy they will be able to do it sooner I believe. The bilateral mastectomy (two sided) would save my skin tissue and nipples (a newer advance in the world of mastectomies). I am mostly doing this for two reasons: peace of mind and I have a better chance of a final physical appearance that I will be happier with.

I can’t remember exactly which hormone it was responsive to, but it is a cancer that uses a hormone which makes it easier to treat with medications that they have today. I requested a copy of my pathology report and it unfortunately didn’t list it but I believe it was the HER2 receptive kind. Either way, this is good news, I have a very common and very treatable cancer.

I did give samples for them to test whether or not I have the genetic marker that can seriously increase the risk of breast cancer (and ovarian cancer). The lab will double check with my insurance on whether or not they will pay for it (the test out of pocket is $3,400). Mostly I would like the results of this test for my nieces and cousins, as they will need more screening more often. Per the discussions with the person responsible for the genetic testing, this would be more likely from my dad’s side of the family than my mom’s.

I also signed up for some studies where they will use my blood and keep track of me over the years. I will be signing up for another one that will use the cancer cells to test ways to kill them after they have been removed. I have the possibility of signing up for a third one that would involve them taking bone marrow while I am in surgery, I am undecided on that one at this time.

The surgeon had let us know that there was a teensy tiny chance that I was in the perfect window that would allow me to skip chemo after the surgery. After meeting with the surgeon, family/genetic specialist, woman responsible for the studies and getting my labwork done I was asked to go get another ultrasound on my lymph nodes (who knew? Sounded like a good idea though). Unfortunately I had a lymph node that came up with the wrong shape to it (they are supposed to look like kidney beans, not punching bags). They took a biopsy of the lymph node and I should have the final results Tuesday or Wednesday next week. At this time it appears that there is a strong possibility (although not guaranteed) that the cancer has spread to the lymph nodes. The number of lymph nodes that have cancer will determine whether or not I have graduated to stage 3 – I still believe I am most likely stage 2 though. I get chemo either way though – and possibly radiation.

I have been scheduled for an appointment with the plastic surgeon and a MRI in the next two weeks for surgery (sounds like they can also check out my lymph nodes from the MRI).