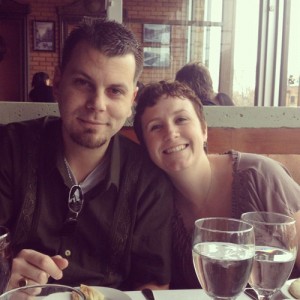 Seriously. This is ridiculous and the whole thing just makes me tired. Tired to my core, so much stress, waiting, and never-ending surprises certainly knows how to wear you down. First off, I had a bilateral mastectomy, I am not supposed to get breast lumps anymore.

This is another one of those moments where I question about whether or not to blog about something. This time I had to wait until I knew what was going on before making a fuss. I found two large lumps in my left breast (cancer side). They were near the bottom of the breast and you can see them visually (I guess I need to look at the bottom as well as the top). They are surrounded with what looked like maybe bruising or thicker patches of blood vessels. I had a dream about my breasts having a dimpled appearance (which is how my aunt found her breast cancer, a dimple) so I looked more closely in the morning, and sure enough a couple of dimples were there. Upon further inspection I verified two distinctive hard lumps (maybe three). I showed them to Mike shortly after. They were all in the part of the breast that had been bruised and darker for most of the healing process over the last six weeks, so I hadn’t really felt around that area and the appearance had been a bit mottled.

I just saw my surgeon and oncologist two weeks ago. So if two large lumps showed up within two weeks, the chance that it would be cancer is pretty low. I would have to have the world’s fastest growing breast cancer (the lumps are large, I had one of the faster growing varieties, but I just had surgery in there seven weeks ago). Online research indicated that the more likely scenario is that my silicone implant has ruptured or that I have fat necrosis (yes, dead fat) from the latissimus flap reconstruction. A possibility that occurs from reconstruction alone and reconstruction on a radiated breast increases the risk.

I have avoided the whole “why me” experience until recently. Now I am starting to get frustrated with the things popping up that add to my inability to really just try to move on. I run on raw anxiety and have been for the last year, this is also incredibly unhealthy for me, so I must find some way to balance this tension somewhere and find ways to cut back on the things that cause additional stress and tension. 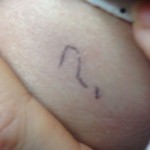 Is it a lump under there?

You know you have a lot of doctors when you aren’t exactly sure which ones you need to see for this problem. I called and asked to see my surgical oncologist (who was the one who ordered all of the initial testing they did) or my oncologist. My surgeon is at a conference for a couple of weeks and my oncologist was able to squeeze me in the next day (yay for less time to freak out while waiting for the appointment). So I did get to go in today. She found the lumps without my assistance (she told me not to sway her judgement) and the third one she wrote a question mark on because she was as uncertain as I if it was a mass. The question mark made my mom and I giggle a bit (so mature).

The radiologist took a good look using an ultrasound and a few pictures of the thin amount of skin and muscle on top of the implant abyss (the implant is a dark void in the ultrasound). No one questions that the lumps are there (there were three), but they don’t look like cancer. The most likely option is that they are fat necrosis as I had guessed before my appointment (they didn’t appear to be scar tissue). Biopsy would be a bit dangerous (big needle, little room for error), but the radiologist didn’t feel like it was necessary.

I now see my oncologist in three months instead of six to keep an eye on them and having lumps makes it harder to find new lumps (breast cancer can recur locally on the skin or scar after a mastectomy and radiation). So here I am, post mastectomy, and I still have lumpy boobs. I guess I will take my lumps, as long as they decide not to be cancer. 🙂.