Check Ins and Ups and Downs 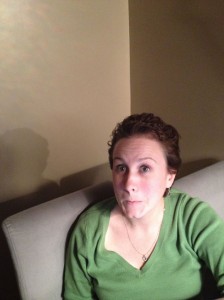 Making faces for the camera. Hair before my second haircut tomorrow.

Something about my doctor’s appointments strikes a chord of fear in me these days. Pre-appointment evenings are filled with anxiety and I never sleep well. Luckily during the day I am sucked into being so busy at work again. I can keep my brain occupied during the day which is a good thing in my world. I love work work work.

It is true that I think about cancer a lot less than I did two months ago. I can go a few hours without it hopping into my mind, I expect it will get further and further apart as time goes on. Fear of recurrence is still an active experience for me, but I am going to have to accept that it is my fate to have that fear, and just keep my head up and keep going. I caught myself thinking about something and my brain added “and cancer took that away from me” – I can’t remember the specifics of the thought except that I stopped myself and realized I need to refocus my thinking. Cancer only takes away from me what I let it.

I was one of 11,300 women under the age of 40 diagnosed with invasive breast cancer in the US last year according to the American Cancer Society (I figure they count me as diagnosed in 2011 since my labs were done in 2011, I was told I had cancer in 2010). When you think about how many women there are in the US under 40, that really is a low number (but don’t rest too easy, the numbers go way up after 40). Sitting and waiting for my doctors today I swear I saw a lot more young women then I would have expected.

I find it oddly unsettling that I don’t have any tests completed (other than blood) when I see one of my doctors regularly over the next five years (I have three doctors I have to see regularly). I met with my surgeon and oncologist today and everything seemed pretty much o.k. Everyone that got a looky-loo was very excited about how everything looked after surgery (I agree with them, my plastic surgeon did a great job). The doctors felt around my lymph nodes, I had nothing too exciting to report beyond an ache in the inside of my shin bone (I have used the elliptical a little bit and it could easily be shin splints?) – I guess bone metastasis is very rarely below your knees and elbows, which is good to know because I can tend to get aches there, so I will have a few less things to get myself worked up about.

I did admit to a little bit of the blues (winter does that to me without other things weighing on my mind). I am not a huge fan of taking antidepressants (for me, I am not saying they aren’t great for other people), I think exercise is the best medicine, and I will just have to haul my lazy carcass out of bed at that six-week post surgery mark and get that therapy going.

So we continue waiting and seeing. My oncologist and surgeon opted to wait six months to see me, so I should hopefully get a break after my tests on the sixth! I may go through doctor withdrawals… Should I see a psychiatrist about that?

My second haircut is tomorrow!.