So I have been trying to avoid the topic of side effects because I kept hoping they would just go away, turns out I am more likely suffering from issues with the Metformin (or some really crazy placebo effect, but realistically, I don’t think I got the placebo). I am getting crazy dizzy spells that make me feel disoriented and out of it. I also generally haven’t felt well, tired, cranky, nausea – just overall ick. Which has been driving me crazy because I am supposed to be feeling better rather than feeling worse! After fighting my cold for a week my body decided Thursday afternoon that it had had it. The room was spinning at work so I went home to lay down. I felt better after a nap, but when I woke up the next morning I was dizzy and exhausted and just didn’t feel right.

I gave in and called the nurse (I feel like a complainer because the only time I call is when I am having problems, but I guess it would be strange to just call to say hello and that everything is dandy). I had also had a sharp pain in my upper arm on the inside where my lymph nodes are which didn’t have me super excited. I wore my lymphedema sleeve this week in case it was lymphedema (and the pressure from the sleeve helped the pain). It turned out that the pain is an axillary web (one of my blog friends had this happen after her mastectomy, so I had seen it, but I guess radiation can also get it going). Stretching and massaging the area that hurts is supposed to get it to eventually work itself out.

They are having me stop Tamoxifen for two weeks (which scared the crap out of me), but they said that Tamoxifen is something that you have to take for the long haul and because I am in the study I can mess up the study if I stop taking the Metformin/placebo. So we are trying to isolate what is making me feel crappy (on top of being sick). The Metformin or the Tamoxifen. Apparently all of the side effects I described are not normal for Tamoxifen, and when I described them to my friend who has type 1 diabetes – they all sound like side effects that come with unregulated blood sugar (interesting because I thought Metformin regulates it, but maybe if you don’t need it, it makes it wacky).

My hair these days is a bunch of tiny little curls that I smooth out with some gel, but it is a bit unruly. I can’t quite decide what to do with it yet, for now I am just letting it grow and do its thing. 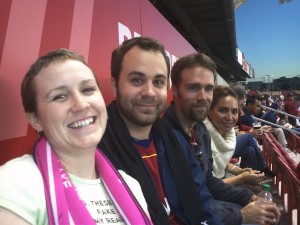