Home » Updates » Aren’t I the Lucky One?

Aren’t I the Lucky One? 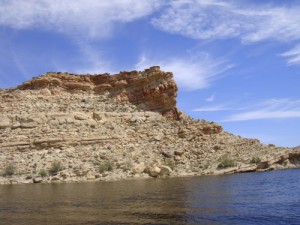 From our trip this weekend.

I really like to think of myself as a go-getter. I want to be first in lots of things, but not radiation side effects. Three days after my first treatment the crook of my neck hurt after I wore an ultra baggy shirt that had a collar (I figured baggy would be good, but I guess collar is bad). Wait a minute… three days? They told me three weeks and I might start to show a little pink on the skin.

I asked the radiation therapists if some scratchy skin after three days is unusual. Their response was the typical response that you get “everyone is different.” I am not kidding myself, I have baby skin. I go in the sun for five minutes without sunscreen I burn – I kind of figured my skin is going to get a bit fried in this process. Three days?

Friday I was exhausted. Not sort of exhausted, very exhausted. I left work early to pack to go camping and instead of packing I crawled into bed and slept until it was time to go to my radiation appointment. Mike came home from work and got stuck pulling the boat out on his own and getting the packing done while I was stuck up at the hospital. I am not sure if I can blame radiation for being so tired or just trying to keep up with work, driving to Huntsman everyday and actually maintaining a bit more of a social life.

I spent the weekend thinking happy thoughts. My skin does not hurt, there is no way I am sore and tired from radiation yet. I am full of energy. Butterflies, rainbows, sunshine, puppies… I was so tired… I wore three layers of shirts to protect every possible way my skin could be possibly be exposed to sun (and put sunscreen on at least four times). We went out on the boat for two hours and I had to take a nap. Mike kept fretting about me. We went four-wheeling and I was beat after less than an hour. I wouldn’t think this stuff would be so much work! This is also the first time since December that I tried to pack so much fun into one day. I slept most of the drive home on Sunday and slept more when we got home. I think I forget sometimes how much my body has been through this year.

As of today you can officially see a bit of a pink outline of where I am being radiated, it barely shows up in a photo so I am not posting a photo. My radiation oncologist told me that some people can get pink early and not progress beyond that , or they can get the burns with the blisters, but to keep an eye on it and wait. When I saw her today I also let her know I now had a bit of a sore throat (my esophagus happens to just barely be on the edge of my radiation zone).

I promise to take some pictures of radiation for my next post. I keep being in such a hurry to get in and out of there. I am so ready to be done with cancer treatment (although I was ready to be done before it started, so that isn’t saying much! Ha!).

UPDATE: They moved the radiation area near my neck over a teensy bit to try and keep my esophagus out of it. So hopefully no more sore throat!.