Home » Updates » An Artist At Work

An Artist At Work 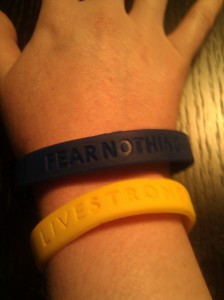 Fear Nothing. Livestrong. Also note - my arm is hairy again.

I believe I may have to bring my radiation oncology team at Huntsman some coloring books. They sure like to color! My “dry run” today was brought to you by the colors green and purple. They drew all over my chest and neck while they practiced my radiation treatment coordinates for next week (the coordinates are the numerical points and angles at which they point the beams of radiation at you). I learned why they do a dry run today, if they had left the machine to its own devices it would have wacked right into my elbow (and funny bone) on one of the angles.

The would run it to the coordinate and then take an x-ray (no lead apron, I guess at this point they figure you are getting so much radiation who cares about protecting your other parts eh?). The machine itself was kind of creepy. I watched as metal rods on the inside would slide around and create odd sized holes before they took the x-ray (I may have to read up a bit more on how this all works). From my understanding the rays they use for radiation are the same as an x-ray, but at a much higher dose.

After drawing all over me, radiation tech offered to sign her work (I think I am going to like her).

What I was not excited to see was what I think is my expected area of radiation. It is big. As in, much bigger than I expected (if the marks prove to be the expected radiation area, they are in fact going up a bit of a way on my neck and shoulder). I didn’t see the marks until after I had left the room, so I didn’t get a chance to ask about them. I am going to try to remember to ask on Monday when I go in for my first zippity zap. I had expected to see something closer to my aunt’s radiation area, but my radiation oncologist had mentioned getting the lymph nodes near my neck and shoulder – so it looks like that really is what they are probably doing (sucks when what the doctor says they will do, turns out what they actually do, right?).

Still covered in markings I ran over to the other hospital to meet up with my plastic surgeon. He poked his head in the room with a worried look and asked why I was there (which is a bit funny if you think about it, because what doctor asks you why you are there?). Honestly, I am 99% sure he was thinking I was there because of ANOTHER complication (I have been so good at those this year). I explained I was in because the nurse wanted him to check me out before I starting radiation – you should have seen the look of relief on his face. He came in and checked me out, I explained that the nurse had been worried that I had a bit of fluid in there, he told me I don’t now (and showed me how to check, I honestly can’t tell by touch. Parts of the breast expander are squishy, other parts are not). He told me that I was healed up nicely and asked me if it felt great to finally be healed. I told him it was awesome! He then proceeded to laugh at me and ask me what was all over my neck (I had hurried over because I was running late and washed off most of the marker with a baby wipe, but had apparently missed a big smudge on my neck).

He seemed a bit disappointed that I had to stop expanding and making the two sides even for radiation (I will start expanding again when I am done with radiation, but I had to start radiation if I wanted to do my final surgery before the end of the year). We then discussed when I needed to come see him next so that we could pick out my implants for what should be my final surgery in December. He told me to come 2 weeks before surgery. No fluid in there means that I could stop antibiotics, which I have been on almost much every day since my mastectomy at the end of January. Woohoo!!!

The hair on my head (and everywhere else seems to be growing at an astronomical pace. It seriously looks longer everyday. Please note hairy arm picture listed above..