Home » Updates » Waking Up From the Fog

Waking Up From the Fog 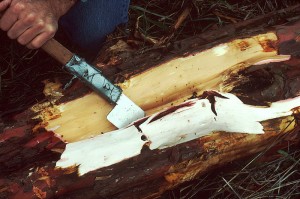 Taxol is made out of the Pacific Yew tree bark. Kind of funky.

The past two weeks stand out as a bit of a blur in some ways. The reality that I would have to have the surgery that I fought to avoid for 3 months, the actual surgery, waking up to life with only one breast, going on disability, my Taxol treatment and the battle of the side effects.

Today I am at the phase where I am coming out of the Taxol side effects a bit more. I am able to walk more successfully (the leg pain from Taxol and numb toes has left me bound to my chair and the television for the last 3 days). My fingers and toes are still numb, my legs still ache, but I am able to make it through the day without the assistance of Lortabs so far (the pain for me is the strongest in the evening, so I write this in the morning when I am feeling my best). Last time the side effects of Taxol lingered through Thursday, so I imagine it will be the same this week. I am not sure how long I will have hot flashes regularly, I imagine that will stick around through my next treatment and go away when I am done with chemo. I am still a bit surprised that Taxol knocks me down more than the red devil did, but everyone is different.

I think some people are given the idea from the media that breast cancer is simple to cure and not a big deal. Quite frankly it is easy to cure, if you catch it early. Salt Lake City has an ad campaign going on right now that breast cancer has a 99% cure rate – which it does, again, if it is caught early. I am not sure where they get the statistics from, but here are the ones from the American Cancer Society. What they sort of seem to leave out is that rarely is it caught at stage zero in women under the age of 40. The reason: we don’t expect to find it, we have to find it, and it has to be big enough for us to find. We also tend to have grade three tumors rather than grade one or grade two (a much more aggressive tumor).

We are all bombarded with statistics and numbers, but once you have moved past stage zero breast cancer, 99% isn’t your pretty little number. The first step is to stay alive and get the visible cancer out of your body. They second step is to try to keep the “invisible” cancer cells from making a new home elsewhere. Someone asked me why I was having chemo and radiation because the surgery “got” the cancer, they mentioned that most people with breast cancer just have surgery and that is it. I had to explain that those people didn’t have evidence that their cancer was “on the move.” Which is usually picked up by sentinel and axillary lymph node tests. We skipped the sentinel test (inside breast lymph nodes) on me because we already knew the cancer moved to an axillary (armpit) lymph node.

The one thing that is less talked about out there is the that women with breast cancer, and frankly anyone diagnosed with cancer lives in fear of the cancer coming back. I removed the cancer’s place of residence in my surgery, there is a teensy possibility it could show back up on the skin or the area around the original tumor – but that is what radiation is for, to try to kill any possible cancer cells that could be hiding out in that area. Chemo is to try to kill any cells that could be hiding in any other system in your body. Due to the treatments and surgeries I have had, if the cancer came back, it would come back in my liver, bones, lungs or other places. Which means I would be stage four, and there isn’t a stage five.

I don’t say this to be depressing, but to show the reality that breast cancer patients and survivors live with everyday. I am going to fight this thing tooth and nail and do everything I can to keep it from coming back, but nothing about this process is 99% easy.

Updated with a TED talk on a possible solution for imaging of dense breast tissue (useful for younger women):
.