Home » Updates » Fixing What Has Been Undone

Fixing What Has Been Undone 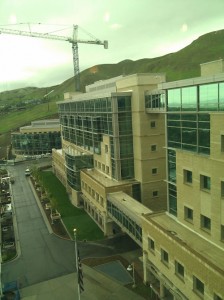 Huntsman Cancer Institute as seen from The Pointe Restaurant inside.

I met with the plastic surgeon today, I had to write down my questions because I had so many of them and wanted to make sure I knew what to expect in the coming months. The first and main discussion was when I would have my next surgery and which surgery it would be. The plastic surgeon looked at my skin after the last surgery and told me that his recommendation is that I have the lat flap surgery on my right side. He told me he would put the expander back in without this surgery, but that my best bet for recovery was to do the more complex surgery. This wasn’t the news I wanted to hear, but I knew that it was most likely what was going to have to happen if they had to remove the breast expander.

His concern was that the possible reason that I have had so many issues with my incision line on the right side is that the skin may not have been thick enough after my mastectomy to bring in enough blood flow to heal properly which could be why I had one issue after another. Also, the right side has been sewn up 4 times, so the amount of healthy skin left in that area is minimal. I don’t want to get back on the ride of the healing adventures of the last few months, which basically leaves me no other option. We discussed other areas that they harvest tissue from, your stomach, your butt, and I am only a candidate for the lat flap surgery out of all of them. The most common method is called the tram flap, where they take tissue from your stomach to create a new breast, unfortunately I don’t have enough to spare to create a decent sized breast and a free tummy tuck won’t do me a lot of good.

This surgery essentially will only be to put an expander back in on my right side, I will have to have the expander swapped with an actual implant when the lat flap reconstruction is completed on my left side in my final reconstructive surgery (which will have to wait until at least 3 months after radiation is over). I will be hospitalized for several days after both surgeries as taking the latissimus dorsi out of your back and tunneling it around to create a pocket for an implant isn’t a minor feat (they also take a flap of skin to replace the original scar from my mastectomy). I will be left with two large linear scars on each side of my back after both surgeries are complete.

This seems like a lot of work to have breasts after going through everything that I have. Sometimes it just seems like it would be easier to say “screw it” and just go without anything at all, but I am only 31 years old and imagining the rest of my life without breasts is unbearable for me, so more surgeries and more recovery comes with the path I have chosen (cancer recovery requires emotional and physical healing).

We also started to expand my left side today so that I can be at the final size before we start my radiation (which means my right side will be getting expanded while I am getting radiated, it will be a fun adventure of trying to get the two to match up someday).

Due to the fact that I have to have the more complex surgery, the soonest they can get me in for surgery is June 29th, with 3-6 days in the hospital and then a several week recovery, this pushes back radiation and everything else which is a bit frustrating. I am on a cancellation list if an opening comes up (I am eligible for surgery the week before, but there isn’t a spot open for the 4-6 hour surgery)..