Just Call Me Queen of Surgery

The hospital called me last night and initially told me to call at 7:00 AM to get my surgery time, they later called to tell me to come in at 6:45 AM. I am not an early bird… at all… I was worried that since I was what they called an “add on.” We would be in the waiting room all day (when waiting for surgery you do at least get a private room you can hang out in), this was not the case.

Once I got changed into my surgery garb the parade of nurses, doctors and anesthesiologists came quick. They wanted me in the operating room by 7:30 AM, which it great because I wanted to get in and get out. They did the usual tests including making sure I wasn’t pregnant (I asked them how often they get to tell people that they are pregnant, they said a little too often and that the worse ones are when they have to tell a 14 year old they are pregnant in front of their parents – let that be a lesson to you, if you are 14 and possibly pregnant don’t go in for surgery – painkillers do naughty things to my sense of humor, be warned).

The surgery went quick, not as fast as last time as I guess I needed to get roughed up a bit to make sure that everything would attach back to my body to offer a blood supply to the skin. The good news was – I don’t have a nasty infection. Maybe a little one, but nothing to cause tissue necrosis or damage to what the plastic surgeon has to work with in June to try to undo what was done today. If he had known this would it have gotten me out of surgery today? No, I had at least 2 holes in my scar – after 7 weeks since my last surgery to close me up, I am just not healing with an expander in place no matter what miracles the plastic surgeon attempted. I also lost about 2 cups of fluid (gross I know) from my incision since yesterday, so the whole thing was back to problematic.

This has been an emotional two days for all involved. Honestly I have a deepened respect for my plastic surgeon, he was downright bummed that after everything we have tried, it still came down to this.

I am scared to see what hides under the surgical dressing that comes off tomorrow. I almost fainted after my last surgery when I tried to take it off alone, so this may not go better. I won’t attempt the feat alone this time, I’ll have Mike take it off. I am also not messing around with pain either, I am staying on a strict regimen of pain killers because I refuse to be in as much pain as I was with the last surgery (so if you see me and I am goofy, or if I write something goofy, I blame the drugs, even if they aren’t to blame 😛 ). This also means I can type now and then.

Chemo will most likely be delayed until after I get my dreaded drain out. Now, for the traditional surgery waiting room photo (I added the earlier ones so that you can see my progression to look like the guy in the movie “Powder” I was warned Taxol may create Powder like tendencies, it was true): 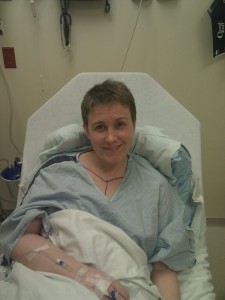 Before my bilateral mastectomy. 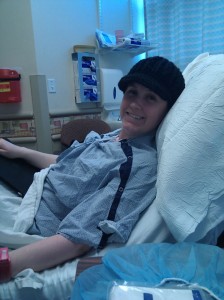 Right before my surgery surprise! 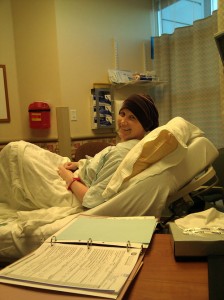 I may or may not look like a cancer patient now.

Thank you everyone for  your well wishes and kind thoughts, they really do help me get through challenging times..