Home » Updates » Surgery is Back On!

Surgery is Back On! 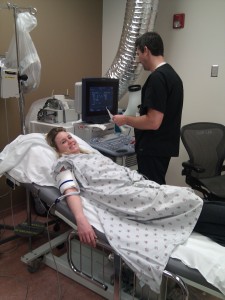 I adored the oncologist team up at Huntsman Cancer Institute. They really finally sat us down, and gave us real answers with real options. I have all of my lab and pathology reports in my binder now. The team met about me this morning, the team consists of my oncologist, surgeon and other experts in breast cancer treatment. They determined my treatment options.

The benefit to surgery now is that I would have it done and would know what stage I am at. I would also have my expansion done before the summer.

The benefit here would be that they could see the physical impact of the chemo treatment on the tumor before surgery, but they wouldn’t know the full extent of my cancer as they may have killed the cancer in more of the lymph nodes before they take them out.

The big issue that came up this week is that the cancer that showed up in the area of my lymph nodes was grade 3, which is the very aggressive cancer grade (the grade in my breast was grade 2). So I have a higher risk of having cancer cells in other places that they should not be. All of the cancer cells I had were estrogen (90%) and progesterone (70%) positive, the Her-2/Neu was negative (which means I won’t need herceptin, which is a great treatment for that, but also rough on your heart). I will be given Tomoxifen for the next 5 years to block estrogen receptors in cancer cells.

They told me that my choice on which order I go is entirely up to me and the impact on the final outcome is 50/50 (shouldn’t make a difference based on whichever). I started to sway towards starting chemo now – as that was the option and it would be nice for them to know how much the chemo killed the cancer knowing that it would have gotten any stray cells.

I bought my first hat for chemo!

We scheduled me out for chemo and planned it all out and it suddenly came to me: “I don’t want a big surgery in the middle of the summer!” You have to wear drains for several weeks and the breast expanders would be much more uncomfortable in the summer as they would be brand new. I would rather be worn out, but more comfortable at least riding on our boat this summer rather than toting around drains and dealing with expansion. So at the last minute I changed the treatment back to having surgery first so that I can hope to at least get out a little more this summer.

I meet with the plastic surgeon Tuesday morning, hopefully he can give me the real low down on what radiation will do to my reconstruction options, so I should have more info then. I am also waiting for them to schedule my full body CT scan to double check for tumors anywhere else in my body. I had an electrocardiogram so that they have a pre-chemo recording of my heart function.

A prescription to buy a wig!

They did plan out my chemo – with the current data that they have, I am scheduled for 16 weeks of chemo going in every other week. I get what is called Dose Dense AC Followed by Dose Dense T. My personal cocktail will be Adriamycin and Cytoxan for 4 times (once every other week over an 8 week period) followed by Taxol 4 times (once every other week over an 8 week period). Both will cause hairloss, thus I have my very first prescription for a “Cranial Prosthesis” which means a wig, so it is time to go wig shopping. They also suggested that I get a much shorter haircut in the next few weeks in order to get accustomed to having less hair (making the hair loss a bit less of a blow I guess).

My mom and I went to Carol’s Post Mastectomy Specialist and bought a special top that you use after surgery that helps manage the drains (and I learned that it is covered by insurance!). I also bought my first hat! Pictured above. The ladies there were so kind and a customer that came in was diagnosed when she was 30 over 30 years ago, she said a few kind words. They were amazed at the option that I have for surgery, I am glad that I have such a great team at Huntsman.

I start chemo 4 weeks after surgery, and then a few weeks after chemo I will go on to get radiation (no luck on getting out of that one eh?)..