I realized it has been a few weeks since I updated the good ‘ol blog. When a blogger is MIA people start to worry (I do the same to other people, I get it). There hasn’t been a whole lot to report, but I guess there has, depending on how you look at it!

I officially started Doxil on November 18th, it was a bit faster than most of the chemos I have had so far. Not to mention it is 4 weeks apart. It feels almost like a vacation – except the fact that I have to go get intrathecal chemo twice a week. My brain team came and gave me my intrathecal infusion while I was getting my Doxil infusion (different ports, kind of handy). It felt like we got in and out of there like bandits. Doxil bandits. 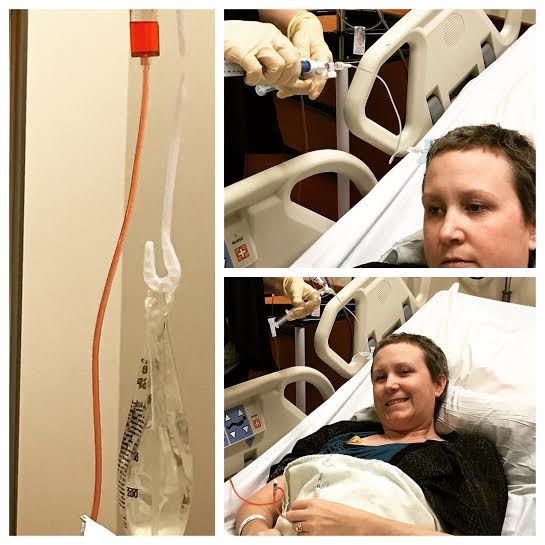 Getting chemo in two places at once.

After many super painful attempts at draining my plural fluid, we got the art of non-painful lung draining process down to a “T.”

I developed an obnoxious cough a couple of weeks ago. I mentioned it to my oncologist and she felt like it was my tumors inside my lung being difficult after everything we put them through with drainings and stretching – along with the radiation damage – leaves a mad little lung. She prescribed cough medicine, which worked the first week and stopped the second week. My brain team checked my blood count and I seem to have an immune system  right now. They had me drain my lung as much as I could before I saw my pulmonologist today. When I saw my pulmonologist he felt like my lung sounded great and that I probably have the chest bug that is going around right now.

I was draining quite a bit of fluid at first and the last week it slowed down immensely. My Pulmonologist felt like one more at the low measurement I would be able to actually get the Pluerx Catheter removed. I had mentioned that my oncologist liked that I was draining the pleural fluid with Doxil, so for now we will keep draining it, see if it goes even lower and get my oncologist’s preference on it after I get my 2nd infusion. Even though I would gladly rip the darn thing out, it is a pain in the ass, or more like a pain in my side, but I want to make sure we are doing the right thing because I am NOT going through the process of putting that thing in again unless I am knocked out on good drugs. 😉