My Very Own Award! (Sort of)

Knowing I needed to get my lung drained more often than I had hoped, we put in a Pluerx catheter which allows me to drain my lung from home. What I didn’t expect is that for some reason it hurt like heck to get it in! Mike took photos of the process, but they are a bit bloody (grotesque if you aren’t a medical person) and looks painful, so I am going to leave them off. I know many many people don’t experience pain getting a Pleurx catheter in or with it overall, so please don’t let my experience sway you in any way.

I think part of the extra pain of getting it in was that my Pulmonologist had to go through my scars from my latissimus dorsi reconstruction –  the nerves and everything are a bit messy back there. I also now control the draining process (I have my own little switch), so I will have to learn the smart and comfortable time to stop draining (apparently that is a bit of an art and something you learn through trial and error). When the doctor does it, they use a pressure gauge to know how hard and fast everything is pulling out so that they know when to stop. The vacuum bottles are a steady pull which you can slow down or speed up yourself (assumedly less dangerously than the procedure at the doctors office, not that everything doesn’t come without risks).

Today was my big appointment with my oncologist and my brain oncologist. My oncologist had emailed me to update me the night before I came in that my pathology report had come back and my tumors showed as no longer having estrogen or progesterone receptors – at least in my pleural fluid (she knows me well enough that it is helpful to let me process things, I get nervous about certain treatments). The HER2+ test was low and inconclusive, so they sent it in for a FISH test which is a bit more involved, thus it takes a few more days.

This is scary for me as I always had estrogen receptors and that offers more treatment options. Initially my oncology team was leaning toward an estrogen blocker Faslodex and Ibrance which assists medications like Faslodex be effective if you have had progression of your cancer with estrogen blockers before. Faslodex works a bit like Tamoxifen that it gets into that estrogen using part of the cell and blocks actual estrogen from getting in – now that I don’t have those little mouths that eat estrogen on my tumors anymore – those medications won’t work. If the HER2+ comes back as being HEr2+ we can look at HER2+ medications again at some point. If all of those receptors are gone that means I also have tumor cells that look and act more like triple negative (but I may still have some that are estrogen positive some places and lord knows…). This is also likely what type of cancer cell that is in my liver and who knows which lymph nodes with the last round of explosive spread – pretty much every organ is involved now when it comes to metastatic breast cancer. I have it in my lungs, pleural space, brain, cerebral spinal fluid, liver, bones, lymph nodes throughout my chest – there are certainly more places it could pop up, but I have the most dangerous places for breast cancer (brain, liver and lungs).

My discussion with my oncologist came back to deciding to go down the Doxil route, which she had brought up as one of her recommended directions before I unsuccessfully jumped back on the Xeloda train. There have been studies that show its effectiveness for brain metastases done in Europe (they had discussed this at the Living Beyond Breast Cancer metastatic conference I went to in Philadelphia). I am hoping that insurance won’t be an issue with Doxil as I guess it is one of those more expensive chemos (I wondered why I hadn’t seen it prescribed more often and I was told it could be because it is a pricey one – Abraxane is in that family I hear too – they took a successful chemo for breast cancer and modified it to have additional characteristics, which also make them more gentle, but they are a new/slightly different drug, so they are expensive again in terms of how drug pricing works in America). I haven’t had that Abraxane yet – but I have done well with taxanes. Taxol and I had a rough go when I was early stage, I am not sure what it would look like for me now.

I met with my brain hematological oncologist and reviewed my MRI, which came back as stable! He didn’t see what looked like any new tumors and my leptomeningeal metastases weren’t worse but they weren’t better (which is why I still have cancer cells that show up in my pathology reports on my CSF – that or with the tumor burden in my body they may be sneaking in still and we are keeping them in check with the intrathecal chemo). My doctor felt like the intrathecal chemo is helping keep the brain metastases stable, which is kind of cool to me, as I had heard mixed reports on whether or not they think it can do that – but as he said, when my cancer is happy it grows, and it has been growing everywhere else. We are staying the course on my intrathecal chemo – if things are stable, it is working, and if it is working we don’t want to shake things up!

Now on to the award! The Susan G. Komen Utah team has been very active on helping spread awareness about stage IV breast cancer. When they made me honorary race chair I got the opportunity to share my story, the realities of stage IV breast cancer and that we still do not have a cure for metastatic breast cancer on radio and TV. This meant a lot to me as they helped me accomplish a very important item for me – help raise metastatic awareness and drive money to metastatic research. The national Komen team now has an option on their website that allows you to direct your donation to metastatic research. Thus between METAVivor and Komen there are options for really focusing research funds on metastatic breast cancer. They also have created buttons and signage for women at the race that are Forever Fighters (a term that has gained traction at a few races as some of us feel weird standing with a “survivor” group and years associated, but we are all different and I think it is great to have the option).

The amazing team came up with “Advancing the Promise – The Mandi Hudson Award” which they bestowed upon me on Friday at their Pink Tie Ball. I was speechless, and blown away by how it was presented and what they said. They shared the statistics and infographics from my page along with my story. They had it presented to me by Alana Welm, who was a Komen Scholar that manages a large team at Huntsman that does a significant amount of metastatic breast cancer research. I had met some of Alana’s team and learned about some research projects. I had signed on as a patient advocate in helping one of the researchers apply for a Komen grant, which is partially tied to a very promising treatment option that I am very hopeful about.

They will give the award away every year to someone who is Advancing the Promise and making a difference in ending breast cancer – for all of us – for this reason I am beyond excited to share the award!!! Komen had announced that they set the goal to cut breast cancer deaths by 50% in 10 years. This IS a bold goal. With the moonshot initiative (please keep that one going President Elect, pretty please), a big effort by Komen, more and more funding going to METAVivor – I have hope that this can become a reality. This doesn’t make me complacent, but it gives me hope for future generations as I fear the Deadline 2020 initiative to prevent breast cancer by 2020 has a lot of holes in it if they aren’t looking at metastases.

Komen was built on the promise to end breast cancer. Advancing the Promise is about ENDING it, I don’t want to die from this disease. I don’t want to watch anymore of my friends die from this disease. There have been quite a few advancements over the years, but we aren’t there yet. I am also hopeful that the more metastases are studied that the more it will cross over to treatments for other cancers (someday I think treatment will be less about where the cancer started, but about the genetic makeup and the weaknesses that exist – which is what Foundation One and Guardant 360 look for).

Apparently I cry when I get awards. We can blame menopause.

My dad took the video, so you get to hear them keep trying to take his food since he stopped eating to take video, hehe. 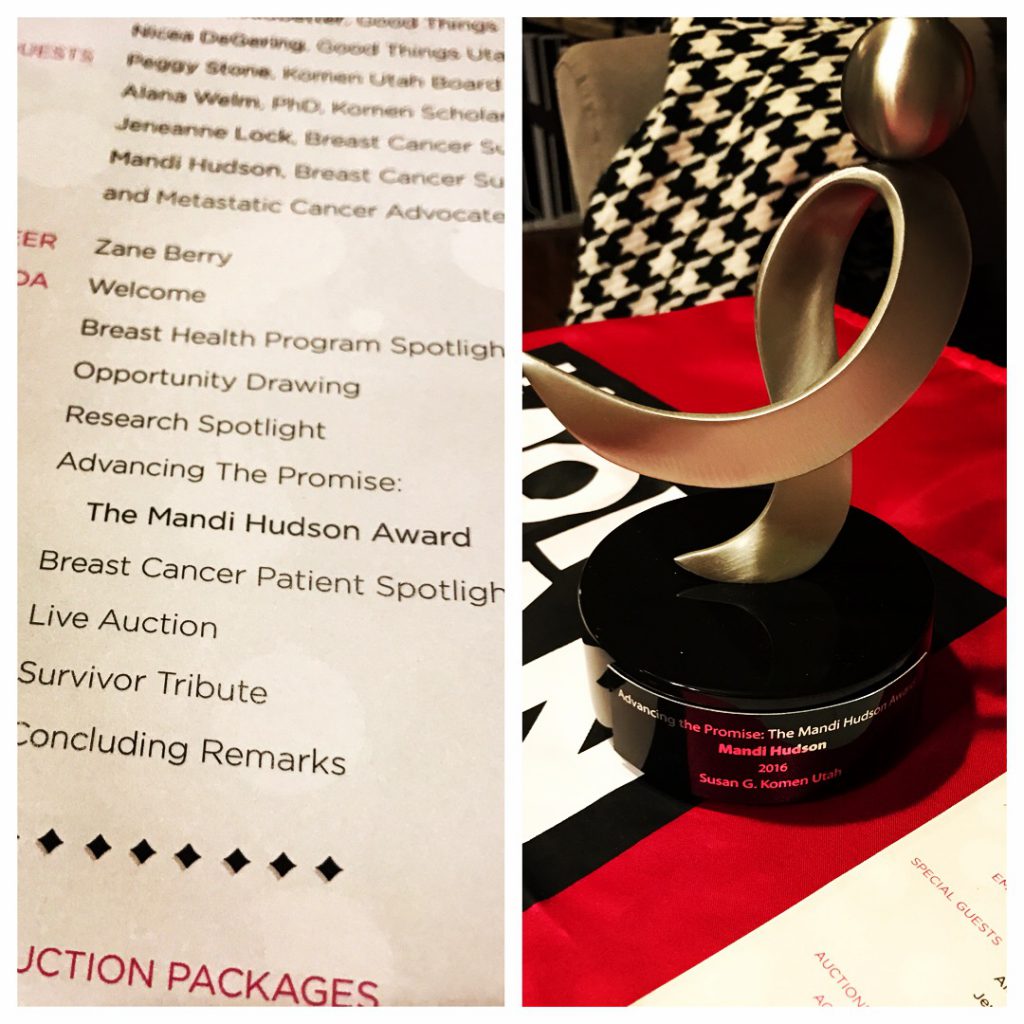 Apparently I was competing in the silent auction at the event with one of the ladies I love and adore from the lab at my hospital for sheets (she saw me leaving with them, d’oh). Had I known I was competing with someone I knew… but I guess that is why it is smart to have an application for those things! Secret and silent (and competitive!). It was a lovely dinner, an amazing award and a lot to think about (what next in the advocacy arena).

My oncologist is also going to pull the Guardant 360 blood test, they have had someone have insurance refuse it and pay the $3,000+ out of pocket – which makes me leery as we chance a similar thing with Foundation One (they don’t go through insurance first, they do the test and then bill insurance). The hope is to have info from the two big tests for looking at a possible combination treatment in my back pocket if Doxil doesn’t pull its weight.