Oh My I Have an Ommaya!

I have had a week of being at the hospital pretty much every single day. Whew. I must loooove hospitals (and hospital food – actually my cancer hospital has two pretty decent restaurants in it, so you can get pretty much whatever you want and it actually tastes good).

It started out with me meeting the really nice brain/spine guy (I need to find out what his official title is, maybe it is Oncologist and I just keep adding that to make life exciting). I met with my palliative care doctor and Thursday was time with my Oncologist. I had my tumor markers pulled Friday, but somehow the sample got lost. We expected them to have gone up pretty high again after my last increase and the issue that it just really hasn’t seemed like I responded to HER2+ treatments on their own.

The plan was that I would go on Xeloda (without Tykerb) if they increased, and if Xeloda didn’t work I would shoot for Faslodex and see if we could get Ibrance approved for me. We had a plan! I like plans!

Right after surgery. Red marks held metal discs that helped guide the location of my brain inside and outside the PET-CT.

I had surgery Friday, I had to be at the hospital so incredibly early I imagine it wasn’t to hard to sedate me (I kid). Post surgery I got my usual ice chips to crunch on while I waited for the move to  room and had the help of the nurse there to get my pain under control (these days I have learned you can do that in the recovery room, it makes a world of difference when you reach your room room. Getting behind on pain is bad).

When I spoke with the surgery prep person I had asked how many days I would be staying at the hospital post surgery and she told me it would be 1-2 nights. I was a bit surprised as I hadn’t known, but no big deal. After surgery I took a long nap, woke up and Mike brought me a sandwich (which didn’t not sound or taste appetizing after surgery queasies) and he also brought me a bunch of candy (which I asked for because I was craving candy for some odd reason. Maybe because I saw candy before my surgery and couldn’t eat it. Lately I am a sweets fiend. My tastebuds are in a strange place and candy and ice cream always taste good. Fruit too. I eat a lot of fruit.

The physical therapists that check to see how you are and see what you can do to help decide when you will be released. They enthusiastically felt like I was capable of going home that day. I was able to walk around, go up and down stairs on my own, I was eating, drinking, using the bathroom… you know… all of those things they want you to be able to do before they send you home. Plus I was on oral pain meds rather than a drip. They also pulled new tumor markers while I was there to figure out what my status was (I know these aren’t accurate for some people, but they have been pretty accurate for me, once we thought they weren’t, but so far, they really have been indicative of what the heck is going on).

The doctors and nurses agreed on releasing me, so I was released around 6:00 PM Friday. Which meant Mike had to double time having to take care of me while I healed, he did a really good job. I didn’t have a bell to ring, but these days we do have text messaging. <3

I slept most of the evening after I got home and almost all of Saturday. Saturday late in the evening I woke up and my gauze was covered in a clear liquid, which unfortunately looked a bit like cerebral spinal fluid. I wanted to wait it out, because  really didn’t want to go back to the hospital, but Mike being the good caretaker that he is, called the hospital. The on call doctor told him he needed to bring me in. So he did. At 1:00 AM Saturday night.

The gauze and everywhere soaked with the odd fluid on Saturday night.

Once I was there they couldn’t get the fluid to come out anywhere, so they kept me overnight for observation. I actually slept ok and when the morning came around, BOOM, no fluid. So no one knows what happened, but they said they would have just put more staples in (not sure I want to be awake for that one).

This morning my oncologist called me. My tumor markers came back and they had dropped a little bit. This is the first time they have been anywhere close to stable in a very long time. We were both shocked. She mentioned she had gone back and forth and couldn’t decide on what to do. We chatted it through and normally you give a medication at least 3 cycles/months before you say it isn’t working. So we decided to do one more Kadcyla infusion (I have only had 2) just to see what happens. If there is any chance that I can stay stable on Kadcyla, that would be awesome. We would then need to rethink this HER2+ thing my oncologist and I are pretty convinced that I am not HER2+ enough to be responding to the therapies, it just doesn’t seem to help. They took a big sample of cerebral spinal fluid today so that they can try to gather up enough tumor cells to send them to Foundation One, so this may give us some answers on HER2+ being checked again (and since we think I have HER2+ mets and HER2- mets it would be helpful to know which kind is floating around in my CSF). 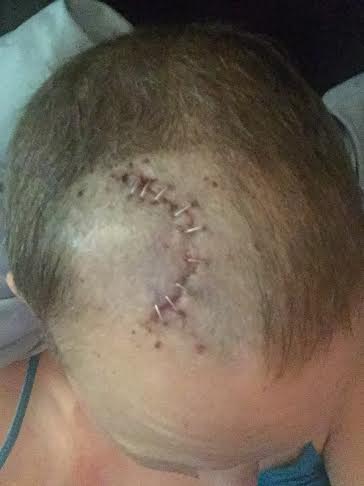 What my head looks like now. Staples come out in just over a week.

After this cycle of Kadcyla we will schedule my next PET-CT and it will be a new baseline if we switch to Xeloda. It also gives us insight into what is going on with my body (some of my liver enzymes are off, which I guess can be related to bone issues or liver issues).

I know we have had everyone super worried about us. This recent change has been really frightening (more so than even finding out it was in my brain). It stamped more of an expiration date on me and Mike and I are just not ready for me to die. (Are you ever actually ready?) I say that, but I have watched many friends make the decision to go on to hospice, and I know that there will be a day I too will most likely make this decision. Either from lack of options, if I am just not feeling well enough (having a good quality of life), or options failing me to the point that my body just can’t take it anymore (chemo etc. fries your organs after a good amount of time).

Each time we really have to look at death in the eye at this level we all get freaked out.

Thanks for the love and support.