I have been dreading and looking forward to June. My life is an exciting bunch of good and bad.

June meant our big Lake Powell trip that we have been planning since last year. It has been a list item for me, I live in Utah and have somehow never been to Lake Powell. Mike loves Lake Powell and he has been aching to go for ages and it has just never been in the cards since it is a far drive and we have wanted to spend a decent amount of time down there.

June also means my Little Pink Houses of Hope trip! I am taking my mom because the one I got approved for was right after our Lake Powell trip and trying to get that much time off of work for Mike is a bit overboard. They approved my mom going in his place (although they warned we may still share a bed as we had been approved as a two person accommodation, so if my mom snores too loud I can always sleep on the couch, or she can – it may become a battle, haha). My mom and I fly out to Key West on Sunday! It will be yet one more day of waking up too early, but when it is for palm trees, I try hard not to complain.

June also means PET-CT, Mugga test on my heart and the next brain MRI. My tumor markers have been pointing to problems (my last PET-CT for metastatic breast cancer was borderline and my last brain MRI was kind of confusing). Living in the land of quarterly tests that determine my fate. Oh boy! June is that magical month of checking and decisions.

We spent a bunch of time and energy prepping for Lake Powell, I kept wearing myself out running errands and trying to get ready. Right before the trip Mike remembered that the board under the boat had broken on the trailer and there was no way it was going to make the 6+ hour drive each way without majorly damaging the boat. My dad and my older brother were in town the Saturday before because we were doing family photos with Heal Courageously (I am super excited to see the photos when they come!). They managed to figure out how to get the board out without putting the boat on the lake and got it fixed and swapped out. We also had to get new tires for the trailer. 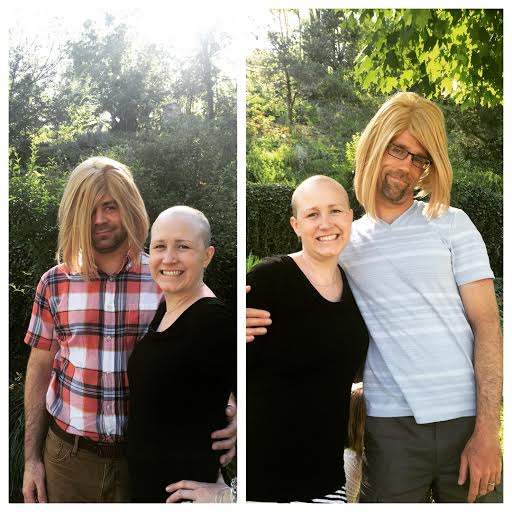 My brothers wearing my wig even though I hardly wore it for the photos.

Once we got to the lake and got the boat on the water Mike discovered he didn’t have a working neutral (those things you find out when you put it in the water). Just forward and backward. This made driving the boat “interesting” for him, but he was able to manage to get us out to explore. The bimini also broke. So our boat was deciding after many many years of being a great boat that never had a single real issue to being the world’s biggest pain in the butt on its biggest vacation. Bad boat! We had planned on selling it since we haven’t been taking it out, and it is starting to be painful for me to ride in with my tumors in my back (all of that bouncing on waves etc. is… well… PAINFUL). We saved it for this Lake Powell hurrah, now we will be fixing it before we part ways. 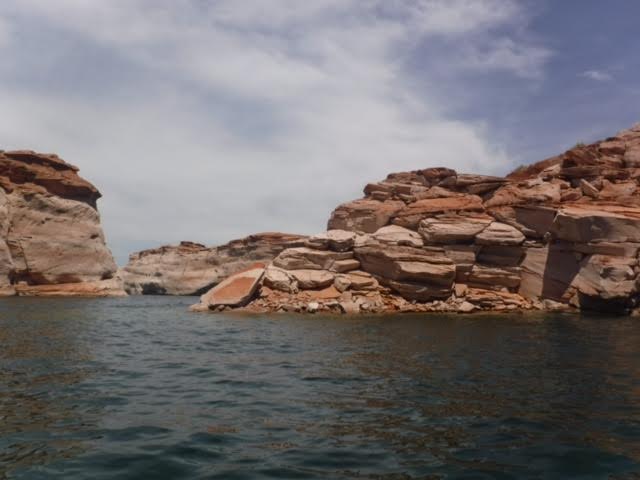 Lake Powell was also decidedly in the low 100’s the week we were going. The week before and the week after the low 90’s, but the week I had planned it decided to be HOT. We had some people in tents and our dogs staying in the RV (so we had to run the AC and generator all day to keep the dogs cool, the humans sat in the shade and did their best – time in RVs to cool off when needed).

Lake Powell was as beautiful as everyone promised! Floating in the water and spending time with my friends was a lot of fun. We had a great time in Fifi the RV, Kira got to swim in water for the first time and I managed to put on some weight with all of that camping food. I am super curious on what it would be like in a house boat. Maybe someday!

My week back has been nonstop appointments after I took a couple of days to recover from camping (which is somehow a lot of work, even though Mike gets stuck with putting camp up and taking it down, he is awesome like that).

I found out that my heart has showed significant improvement! It is no longer in failure! Yay!

Wednesday I went to see my pain doctor and got a medical student while I waited for her. The medical student must have some fear of terminal cancer patients and their prescriptions. He decided to take it upon himself to try again to convince me that I need to get a pain pump (after he told me my pain prescriptions were “awfully high” – it is an emotional thing for me, I don’t want the surgery or another thing poking out of my body right now). My pain doctor had told me in a previous conversation that I didn’t have to get it and we could look at it when the time comes. The student had me in ugly tears. Luckily my pain doctor didn’t bring him in when she chatted with me, she had an easy solution to my issue that didn’t involve upping my pain meds and drama over. Yeesh. I may have to ask to avoid medical students, I hate dealing with pain meds as it is and find it extremely embarrassing to have someone remark on it.

Today was the big PET-CT. With my tumor markers creeping up bit by bit, we found out it did a 35 point jump over this last round, eeek (this is the biggest jump so far). Tumor markers can indicate the growth signals that tumors put out through proteins in your blood (from my understanding). The PET-CT showed that I had new lymph nodes in my stomach with tumors, some new areas in the lymphatic system in my lungs with tumors, the pleural effusion in my left lung grew quite a bit (my oncologist noted that Taxotere can also do this fluid build up, but report looks like it shows uptake), and a new lymph node at the base of the neck with a tumor. I guess getting the Nuelasta made my bones hard to read, but from what it looks like there were new lesions and some lesions improved from what they could see in there. My liver still looks tumor free at the moment.

With all of the new tumors and the tumor counts it was time to change treatment. My brain scan is on the 28th, which could impact some things, but Kadcyla (also known by its study name TDM1) is a targeted therapy for HER2+ breast cancer that was next on the docket at some point. Since my liver looks ok and Kadcyla might impact brain tumors, it seemed like the likely next step (my body is also exhausted from chemo chemo and a break would be nice). The decision was made to switch my treatment, it isn’t working, so my infusion today was not Taxotere/Perjeta/Herceptin – we were able to squeeze Kadcyla on the docket. This makes me happy since I was really hoping to try to keep the same schedule, since my 3 week infusion schedule I have right now works around some items I had planned for this summer (namely Burning Man, you know… priorities!). 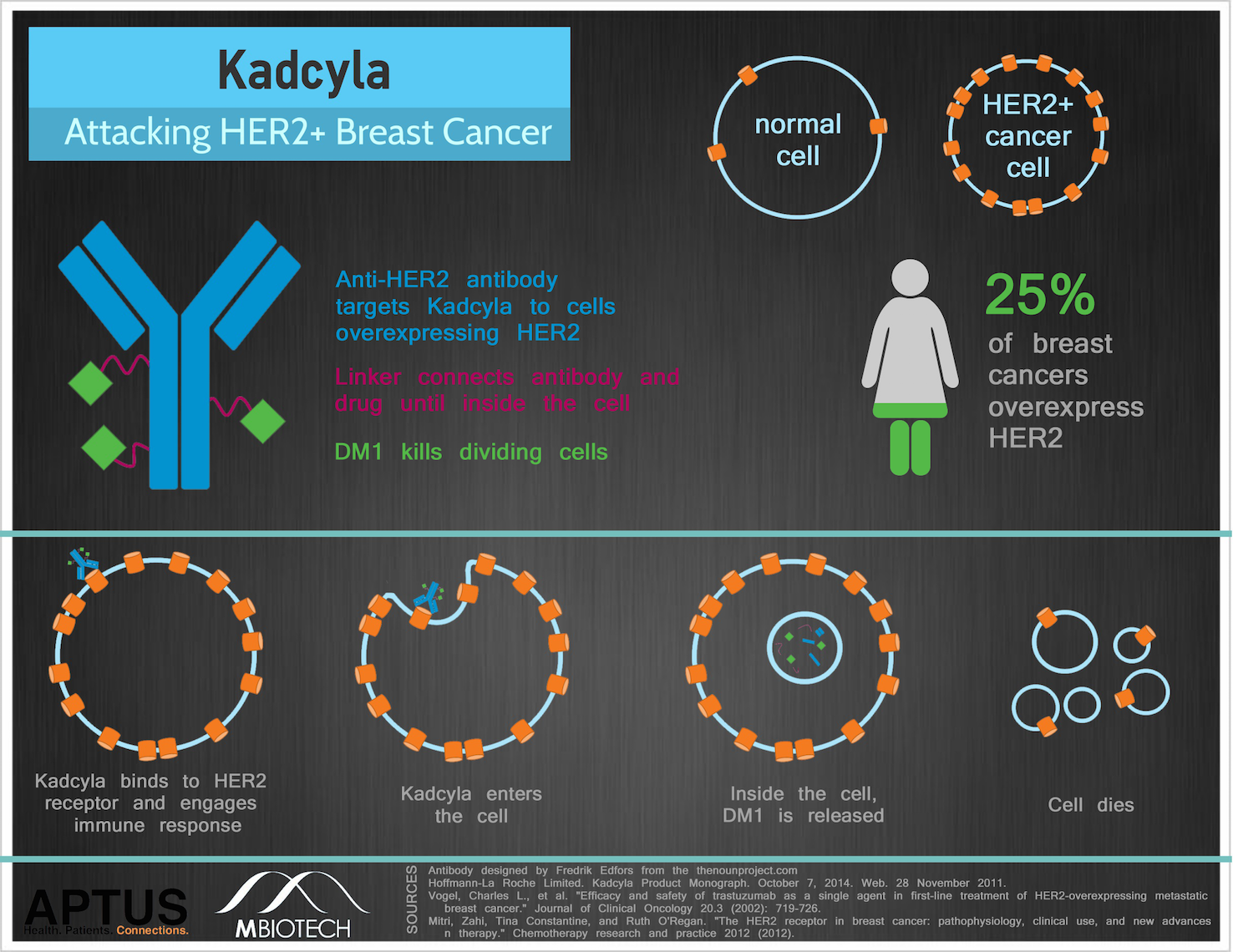