The Story of Goo & Gull

This is an amazing story posted by Shellie Long Kendrick on her Facebook notes. I am reposting with permission (she added a few edits too). It is so fitting to all of us in cancerland. Enjoy!

Sometimes I feel like I have an angel and a devil sitting on my shoulders.

The angel goes by “Goo” and the devil is named “Gull” It’s actually spelled “g-l-e” , but Gull changed it about 4 years ago. Being a total hipster and all.

Gull: age 40, freezes his jeans instead of washing them, brings his typewriter to Starbucks, wears kilts to special events, only drinks green smoothies for breakfast… the list goes on and on. He’s kind of a weird devil but I’m stuck with him, so oh well.

Goo didn’t change her name but she does correct people on the pronunciation. “It’s not “goo!” like a 3 month old baby, it’s “goo…” Here Goo will softly exhale her name like a French model smoking her cigarette into a navy midnight.

Goo & Gull, or as some people like to call them by their Supercouple nickname GooGull, are pretty much separated at this point and are not on speaking terms. They disagree about a lot of things, the biggest one is about their guidance over me. 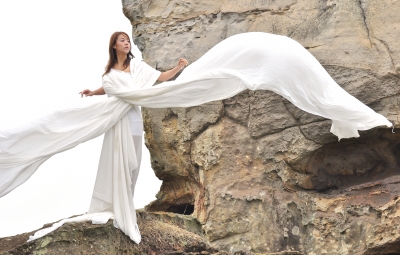 Image courtesy of Just2shutter at FreeDigitalPhotos.net

Goo knows my heart the best. She loves me even though I’m very awkward and strange. When fear strikes, she listens without saying a word, nodding slowly, her Adele winged eyes never leaving mine.

After I’m done telling her all my worries she doesn’t speak for a while. The silence is filled with smoke shaped O’s heading up into the night.

(Oddly, for being a French model this is the only phrase she knows. She isn’t quite sure how to spell it either, so don’t ask!)

“Shellie…” she begins again. “When your mind starts wandering, when it goes to the land of afraid of missing first moments, missing milestones, missing their hugs, their kisses, their love and then when you keep running until you end up in that land of worried about being forgotten…”

“Don’t go there,” her hand squeezes mine, “Stay here. Stay in this place of smiles and backpacks, brown paper lunch bags and dancing in your car. Stay where you are loved and kissed and hugged. Stay where your feet are.”

Then when Goo feels my body relax and my heart again beats in peace, she flies away. Her wings edged in glitter and diamonds twinkling their good night to me.

Sometimes after Goo leaves, my spirit finally at rest, Gull will suddenly show up.

He’s not a mean devil. He doesn’t make me rob banks or steal Easter eggs right out from underneath chubby little fingers trying their hardest to fill their baskets.

He’s just a very narcissistic one. He thinks he knows everything and doesn’t mind telling people so.

Gull is also a wonderful listener. When I’m ready to talk, he’ll put down his typewriter, changing it for an antique pipe he bought on eBay but tells everyone a Scottish man gave it to him on the “rolling emerald hills atop steep, craggy cliffs that reminds one of a time long ago.” His words not mine.

He chews on the end of his pipe, his dark brown eyes intense in understandment

as I spill everything out into the open. I share deep thoughts and questions my voice growing louder and faster with each one. I don’t even care if the whole coffee shop overhears.

Whenever I stop talking Gull waves his hand in the motion for me to keep going. So I do.

And soon I’m crying and yelling. I rub my eyes over and over until all my makeup has come off. I look at the back of my hands streaked with tears and brown makeup and know that my eyebrows are gone, or at least smudged all over my forehead.

Actually you know what… Gull is mean! Because when I look like this, (which I often do when I get into conversations with him) my eyebrows bald, my lashes missing, my face blotchy and my head bare, Gull tells me how ugly I am, that I look like Gollum (“my precioussss” he likes to quote) he tells me that my wigs look fake and that no matter how much makeup I put on, underneath it all I still look like a freak.

The weird thing is… I totally listen to him! I nod my head in agreement. I keep silent as he critiques and complains. I believe him!

I sit there crushed, but I still feel the need to confide my biggest fears- of cancer spreading, of being in pain, of my eyes final closing and only seeing dark, worried that my mistakes will keep me from heaven.

Gull nods  “yeah I can see that, I know where you’re coming from, those thoughts are completely valid” he likes to interject as I ramble.

He brings up stories and tales of other people who think the same things I do. They had the same symptoms I told him about and guess what? they died. Gull tells me these things with his smug, all knowing attitude killing all hope I have left.

And then suddenly he stops talking, picks up a book about holistic farming and purposely unpurposely ignores me.

Tears run down my face. I’m so scared that I can’t breathe and I start gulping for air.

I pull my phone out of my purse but I’m not sure who to call for help. I rack my brain for someone who I know not only loves me but also won’t be scared to hear me cry. I can’t type in my passcode. 7 more try’s until all data is erased.

— the phone hums and I recognize the area code of 404 being Goo’s.

“Hello?” I pitifully cry out.

Her calm voice is on the other end.

My throat is stuck and I can’t swallow the lump.

“Can you do this for me Shellie, Mon Cheriè, can you stay in the now for me?”

“Yes.” I answer again with conviction.

“Je t’aime” she whispers and hangs up the phone.  (Looks like Goo knows how to say I love you in French too!)

I look up to see that Gull has been listening to everything. His mouth opens to give his opinion. I can’t even look at him now.

I wipe my eyes, pick up my purse and walk away. Get into my car and drive home.