Holy heck. This month just needs a do-over. I avoided the hospital in December, but the payoff was an explosive month. A hospital stay. Massive progression in my body. Being told my brain had improved and finding out I have progression there. Spinal taps and blood patches…

My spinal tap was a pretty uneventful procedure. They even showed me my lovely cerebral spinal fluid which was clear and looks like water. They had sent me home to rest on my back for 24 hours to avoid “the headache” and 24 hours later I had “the headache.” I couldn’t look at a computer screen Friday or Saturday without wanting to tear my brain out, but luckily managed to learn how to use my cell phone and lay in just the right position. Eventually even able to read books after I got bored with Netflix.

A spinal headache is a class of its own. Your head feels like it has been run over by a dump truck and no pain medication in the world offers an ounce of relief. The headache eventually goes away if you lay down on your back and don’t move. So things like letting the dogs outside to go potty was pure torture. Especially Dante who has to find the perfect spot, do 15 circles and when the wind is perfectly blowing SE at 5 mph he will take a dump.

I posted lots of pictures of the dogs, and my legs, from bed. 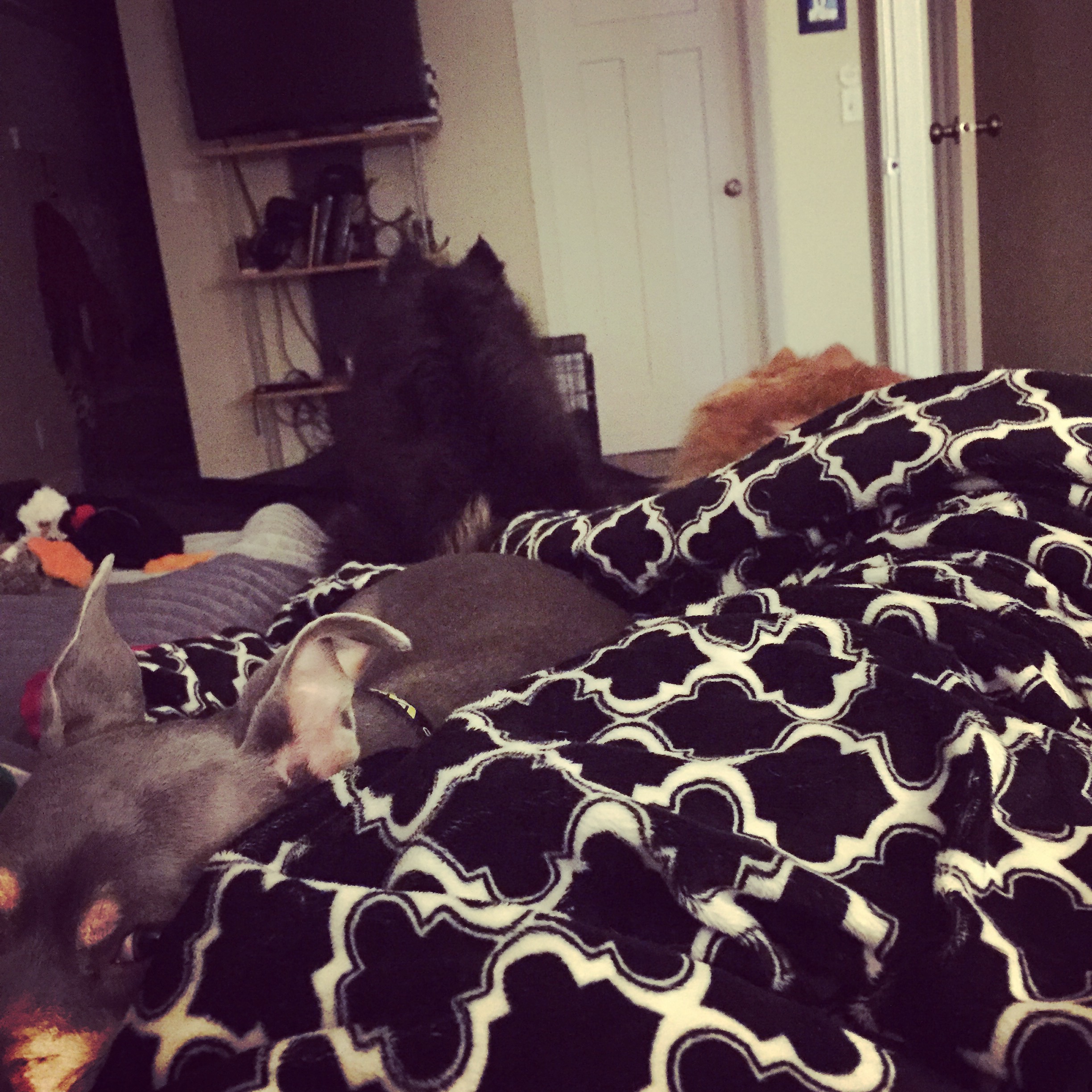 By Monday I was over it. I was ready to head to the ER, but scared about exposing myself to the germs and bugs going on I tried to get in touch with someone at my hospital. Monday was a holiday, it is a university hospital and everyone was pretty much out. The on call oncologist told me to wait it out or go to the ER. He kind of said it in that “WTF are you bothering me on my day off with this” tone. >:(

Tuesday morning we were just going to head up to the hospital, but sitting was incredibly painful, so I opted to call. No one told me who to call to fix this – just that they could “fix it” if it happened. So my oncology nurse had to do her usual “track some BS down for Mandi because she always gets the bad side effect and is full of drama” route (that isn’t how she sees it, it is how I see it). The neuro-doctor called me at 2:00 in the afternoon (I was starting to panic that I was on my own and would have another night in pain, so I was a ball of nerves and tears because I was finally at my last straw in this). He verified that it was a spinal headache (duh) and told me they could go ahead and get going at 3:30 PM.

My mom ran me up to the hospital and I tried laying every weird way to get my head down in the waiting room. I found out that they could sedate you for this procedure, but I hadn’t known and had had lunch and water and coffee. So they offered some Fentanyl… I think I discovered I have some kind of tolerance to Fentanyl because I swear it didn’t do anything. I don’t take Fentanyl for pain, so I have no idea why… hrm. I am learning to always take sedation… always. Something is bound to go wrong. 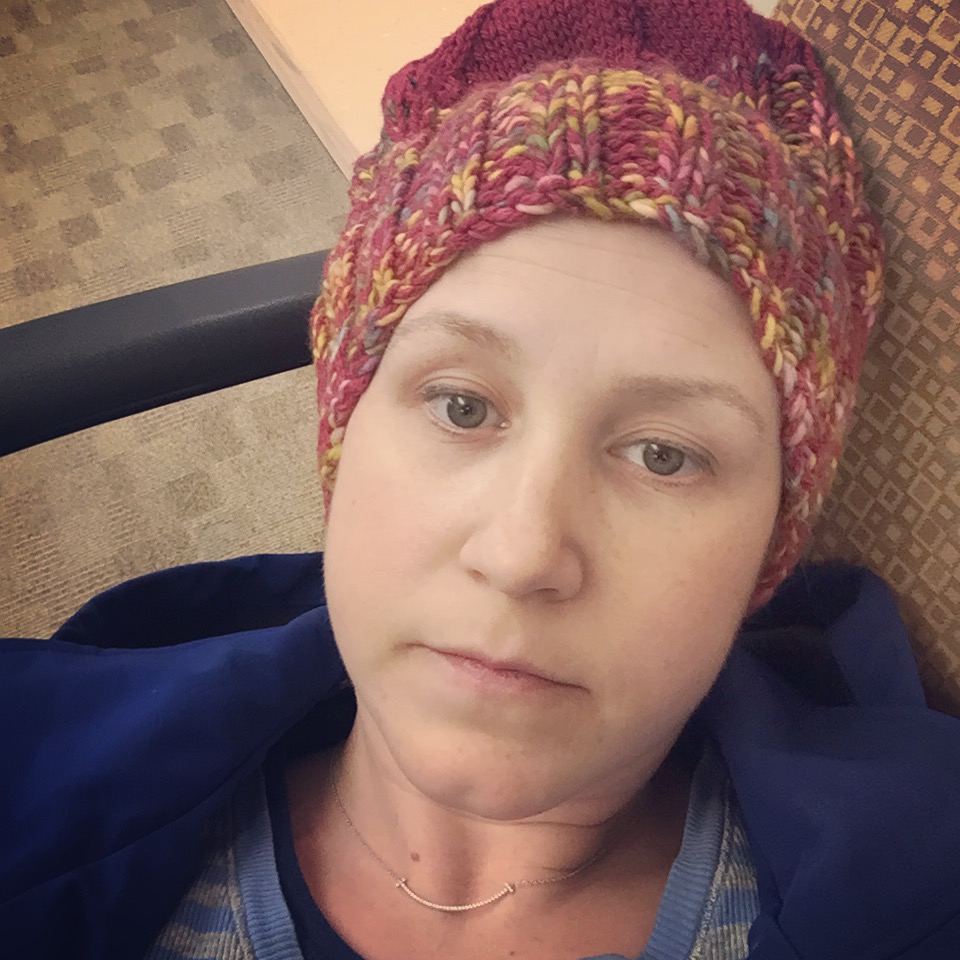 Trying to get comfortable on the waiting room chair and hiding my wild curls with a hat someone had donated at the hospital. I thought it was a cute hat! Look, hats make it on head like mine (prepping to start chemo again, so recollecting hats)

I warned them before the procedure that they should try to find a vein that was giving blood before they dug into my spine. They debated and chose to wait until closer to spine time. They had my spine ready and the vein wouldn’t give blood. So the panic began. Looking at my veins in my feet. Poking into every vein in my hand. An anesthesiologist had popped in because he needed the room I was in for a procedure for something much more serious – he started to help the “find blood hunt.” They won’t take port blood because of the heparin in it, and nervousness about perfect sterility in the blood going into my spinal fluid area.

He finally jabbed the vein in the top of my wrist after twisting my arm hard (he is used to his patients being passed out I believe…). By this time I was in tears. Sobbing with my blue hat and mask on. The nurse asked the doctor if she could give me Ativan because it is a drug I take for anxiety (and sleep and nausea). He approved it, so I finally started to calm down from my panic attack. Needles in my back, everyone running around me, needles jabbed all over with no blood coming out. The doctor had his hand on my head and was being very nice, trying to calm me down (there was also a person in the ER that I went to high school with – so kind of awkward).

They finally got the 10 cc’s of blood they needed and injected it into my spine.

The doctor stood with me while they sent my mom to get my prescriptions I needed from the hospital since he didn’t want me walking over and getting them. He waited and was the one who ended up putting me in the wheelchair and wheeling me to the car. A patient in the hallway remarked that I had a doctor doing this for me, I must be a big deal (I am right?!). Seriously though, this doctor made me feel so much better after such a traumatizing afternoon by showing a little bit of extra kindness. I don’t know what it is with procedures and my spine that have to always go awry. I at least headed home calm and my head wasn’t pounding.

I came home and found some lovely gifts friends had sent me. I changed into some of my new pajamas and apparently just conked out. I woke up with Mike on his laptop on the bed next to me. I brushed my teeth, read a little, and went back to sleep. Apparently, I was tired. 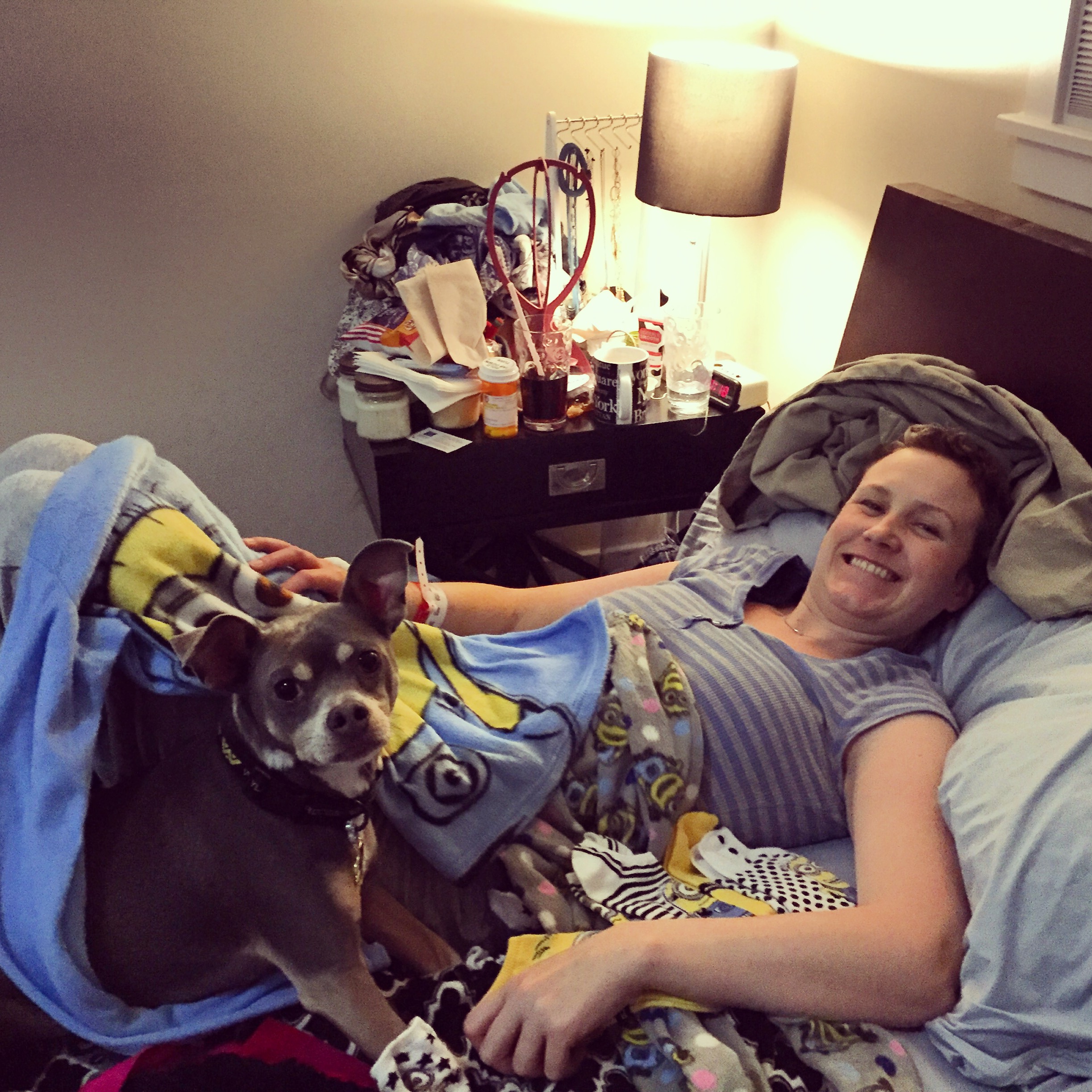 This morning I got the call I had been sadly expecting. The super kind trial nurse told me I had been turned down for all of their trials because I have too many brain metastases. When I had the incorrect info about my MRI I thought I had a chance, when I had the info with the spots that they were worried could be leptomeningeal metastases I sort of knew that their docs would read those as the tumors that would take me out of the running. I had to try. Trying made me feel like I was trying…

It saves my oncologist the headache of trying to talk me out of it I guess. 🙂 I tried. My moonshot missed the moon and slammed back into my face and splattered everywhere.

I have chatted with another oncologist and a researcher getting a feel for other ideas, but I have been 3 weeks without treatment and my cancer grows fast. So, I am going in and getting chemo on Thursday and hoping that my oncologist is willing to look at some of the other options we discussed. She doesn’t want to overtreat me, but I need to know we are trying to do something about my brain even when we are focusing on fixing the liver tumor. A possibility was to give me Xeloda on top of the Taxotere – I am hoping we consider adding it. Still wringing my hands over HER2 therapies and when/what will happen there.

My friend compared my situation to a battle on multiple fronts and not enough soldiers to send into battle. Which is kind of what it feels like, even though I normally don’t love war/cancer metaphors. They have to decide what is the most pressing issue and focus on treating that, a screw up is my life. This is how I ended up here, a change in treatments and my body started to progress to my liver, which is a huge issue vs. my old tumors and my brain.

I am still gathering other opinions/ideas/options and may consider going somewhere for a trial or treatment if we think we find something that makes sense. I hate making decisions out of desperation.

This has been the longest couple of weeks on my life. Luckily I can start spending some time upright now.

Thank you everyone for the kind words, gifts, and sending love.