This past week has been a whirlwind. Literally and figuratively, the world has been spinning around me as I have been battling nausea to the Nth degree and there is a huge windstorm outside right now shaking the house so hard that I may go build a blanket fort and go hide in it with the dogs. For protection, you know…

Some of my girlfriend’s and I fulfilled the slumber party of #TheMandiList, my friend was able to arrange the use of a “townhome” in Park City, UT for the stay. Townhome is in quotes since the house was 4 bedrooms, 4 FULL bathrooms (one with a shower I called the party shower, since you could fit a party in it, no parties were had in said shower). It was huge, and lovely and just what I needed since I wanted to run away a little bit from my week of calling everyone in the universe trying to get my radiation scheduled.

At the party we drank a bottle of Dom which my friend had bought. We were supposed to drink it on our Europe trip, but strangely, I couldn’t find it anywhere. It was fun to share among close friends instead anyway (Mike would want to put OJ in it, he likes those mimosas). One friend said it tasted like diamonds, another friend drank it out of a beer mug (it suited her less pretentious approach to the finer things in life). We burned marshmallows (no one set the house on fire, luckily, Michelle…). I got to wear my Mickey Mouse footie pajamas, and I rolled around in a pink and white poofball beanie (don’t judge, my head was cold).

Early the next morning I hopped on a plane to NYC to meet up with a marketing and PR team from Novartis they paid for my hotel, airfare and food – so this means anything I say about them is supposedly and possibly skewed by the fact that they paid for stuff, so technically stuff about Novartis is sponsored). Realistically, I never write about things I don’t believe, so just expect my opinion on all things. Unless someone showers me in millions of dollars, I might write wonderful things about them (hint hint, folks with millions that want to shower me and have me say nice things).

I had been feeling a little off in Park City, but started to feel more “off” on the plane. I have been struggling with random bouts of nausea. I will just be sitting there, minding my own business and BAM I have to run to the closest vomit receptacle and hand over breakfast/lunch – whatever is in there). It happens in the mornings more, so yeah… I had to have the driver pull over the car so I could throw up on the streets to NYC. Which is befitting of a trip to NYC because I have many awful transportation stories in that city, so many so that my boss always would allow me to take a towncar rather than a taxi…).

The weird thing is – the nausea is set off usually by food. I can drink a cup of coffee or a glass of wine and be fine. Food hits and I get to chit chat with Ralph. Either way, I have spent most of the last week in bed with nausea, we have been messing with my nausea meds, but it seems to be letting up a bit as time goes on. So I am wondering if I got a bug on top of my spontaneous tummy habits. Who knows…

We had a lovely dinner with the Novartis team and a couple of breast cancer bloggers. I ate a few bits and saved my chances for dessert. It was lovely meeting the other metsters at the table. It is always interesting to hear everyone’s story and the truly varied challenges we face with this disease (and seeing women living fairly normal lives is always nice too). Mine is far from normal, as I sit here pondering my blanket fort…

Monday we were set up in a neat conference room that had a patio. We reviewed and discussed some materials Novartis had regarding how certain medications work at slowing tumor growth (and various ways it could be adjusted). I explained how my oncologist usually draws and/or writes every time we are at a crossroad. I got a drawing of “my tumor” and its known receptors and the medications that would impact each one. 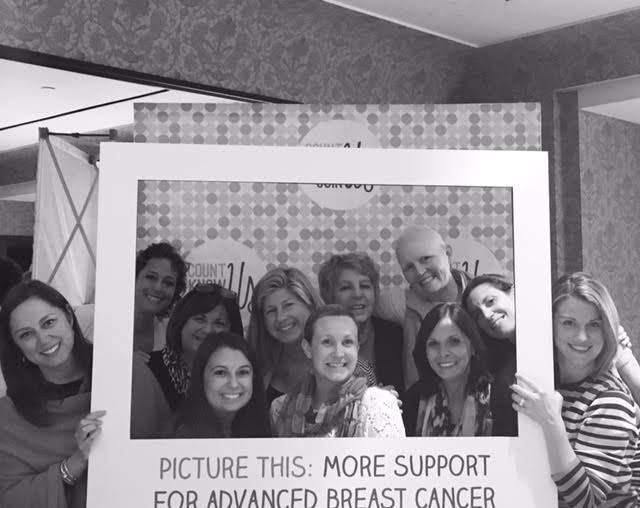 A nice RN who recently finished early stage treatment was there. She gave some great advice and reminders about handling chemo side effects (which I will use in building a post later on).

Part way through the discussion I realized that Afinitor (a Novartis drug that impacts the mTor receptor) is usually paired with Exemestane (which is what I was just switched to, to hopefully impact the estrogen part of my tumors). I sent my oncologist a note (she has been hearing from me a lot lately as I ponder various “what if’s” in treatment, what if we try this… what about… even though we know what the game plan is next, I keep trying to figure what we can stack on NOW). I ended up getting approved for Afinitor (yay, small wins, having two types of tumors makes approval confusing and frustrating). So now I will have two receptor impacting drugs in my brain.

The debate that I have had going back and forth with my oncologist (and a couple of second opinion smart people) is Herceptin levels in the brain. There have been direct infusion routes, and systemic treatment they think MAY be getting some to the brain. My friend Jill’s Dr. G explained it best for me:

The degree to which metastatic tumors in the brain are protected by the blood brain barrier is unclear.. The blood brain barrier describes a variation in the permeability of blood vessels.  It means that the blood vessels that go to the particular area allow a  very limited number of chemicals through and usually exclude large chemotherapy  and antibody molecules.  The blood vessels of the normal brain have his property.  The blood vessels of the tumor that is in the brain may, or may not, have his property.  Some of the tumors might have it  and others not.  I think it is unpredictable.  I believe that is why sometimes systemic, intravenous, Herceptin works on brain metastases.

I did grow tumors in my brain despite the systemic treatment, but we don’t know how bad it would be if it wasn’t there. One idea that we have tossed around is upping my Herceptin dose (which does come with risks).

For now, I am just hoping to get this radiation thing DONE, give Exemestane a minute, throw in Afinitor and keep doing my Herceptin and Perjeta infusions. 4 drugs, one brain and one full day of zap.