It appears there won’t be bacon. I assumed my hospital had Cyberknife, but it does not. My choice is SRS. No screws in the skull, just a plastic mask to hold my face down (loads of Valium PLEASE).

After the week and a half to see the radiologist we now found out it could take 3-4 weeks for insurance to even approve the procedure. My tumors are considered small, but this is ridiculous. Should a patient wait 5 weeks to get brain radiation? I normally don’t get angry, but I am furious. We are making phone calls and pushing to see what we can do to speed up this process. As long as I have less than 4 tumors, I am eligible for targeted radiation – I graduate to more, I have to get the whole brain. I DON’T WANT WHOLE BRAIN RADIATION. You can only do it once. Targeted you can keep doing.

My oncologist and I tossed back and forth what to do. Her preference was that I stay the course of Perjeta/Herceptin/Letrazole since my body is mostly stable. I was unexcited about the lymph nodes near my heart that had some possible uptake and my lung spots growing just a tad – plus I read a few studies here and there about the slight possibility that certain estrogen blocking medications have had success crossing the blood brain barrier and treating brain metastases.

The challenge with brain metastasis is that it isn’t studied very much. The expected lifespan after a jump to the brain is expectedly short – so they just haven’t done much there. They radiate your brain, and call it a day. Wave grandly at you and eventually hand you off to hospice. Goodbye dear cancerfied soul.

They are finding that they can actually keep people alive longer if they can keep their body mets stable and the brain mets stable – so now people are actually starting to study what medications cross the blood brain barrier and what can keep you alive longest. People are starting to live longer and longer with brain mets, because they are keeping their bodies more stable, so now they have to figure out what the heck to do about them (and what helps).

The newish concept is Xeloda and Lapatinib – both have been shown to cross the blood brain barrier. This is a chemo drug and a HER2+ medication. We tossed around switching to this, but we don’t know how I will respond to radiation and for the most part – my HER2+ cancer has been stable in my body. So we eventually just decided to try switching my estrogen medication to Exemestane (Aromasin) – since there is some belief that it crosses the blood brain barrier – and all of my tumors still have estrogen receptors and we have hardly touched the top of the estrogen medication iceberg. This may buy a little time. We weren’t sure if I would be able to go back to Perjeta and Herceptin if we switch away (it is risky business, I hat you insurance companies). When I progress (not “if” – it is “when”), we will then move me back into chemo-land and take the chance how my body decides to respond to Xeloda & Lapatinib. 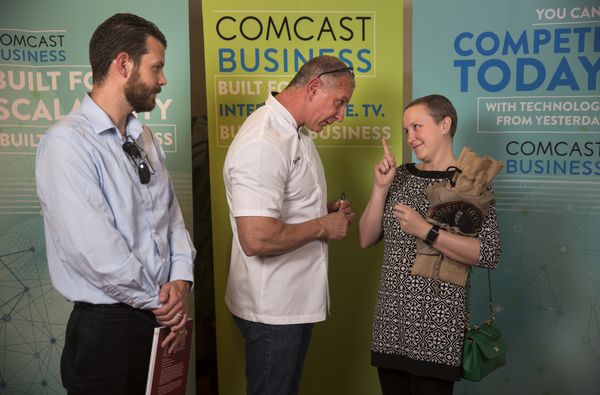 That one time I was hanging out with Chef Irvine at a Comcast Business event. He was telling me to beat cancer. I didn’t have the heart to tell him this one doesn’t have a cure.