It has been a rough week.

Mike and I got in a car accident shortly after I got back from Philadelphia. We were in a turning lane at a dead stop and the car came out of the parking lot barreling at us turning left and expecting to meet the 40 MPH traffic. The sun was setting and apparently he just somehow did not see the car at all. They hit Mike’s side of the car. We were both wearing our seat belts, but I was shook up and my back was extra pissed off after the accident. Mike’s car that he just got a year ago was banged up pretty good, but luckily it absorbed a lot of what could have been a nasty blow to Mike.

After the accident I started to really get migraines again. The ones that force you to hide in a darn room with a cold wet cloth on your face. This reminded me that my migraines had really started right about when we found my lung nodules and we had been planning on doing a brain MRI and kept putting it off. So when I saw my oncologist she went ahead and referred me for the official MRI to make sure that the chemo had not melted my brains completely (it sure feels like it sometimes) and that my migraines are not cancer related.

The MRI came back all clear. This was very good news.

When I went in for my infusion I had been having a rough week. We still haven’t been able to get my pain managed, whatever replaced the tumors in my spine is just pissing off my back. I start PT in a couple of weeks, which I am excited about because I am really hoping that we can rebuild my core strength so that I can comfortably exercise on my own again. When I do it now I seem to injure myself. I also ended up with a palliative care referral this week too. I am sure we will get it all figured out somehow.

After my next infusion we will do another scan. We will then decide whether or not I get a chemo break from the Taxotere part of my infusions.

The one thing that was different was that I did get a Neulasta shot this round. That precious precious shot that makes sure your white blood cell count never dives after your infusion. Good thing I got the shot, because the next day I ended up with a flu/cold (I say it is a cold, my mother says that I have had the flu – either way, it was not very good). I lost my voice all week. It hurt to breath. I couldn’t tell where the chemo ick began and met up with the sick ick. It was just ick all around! 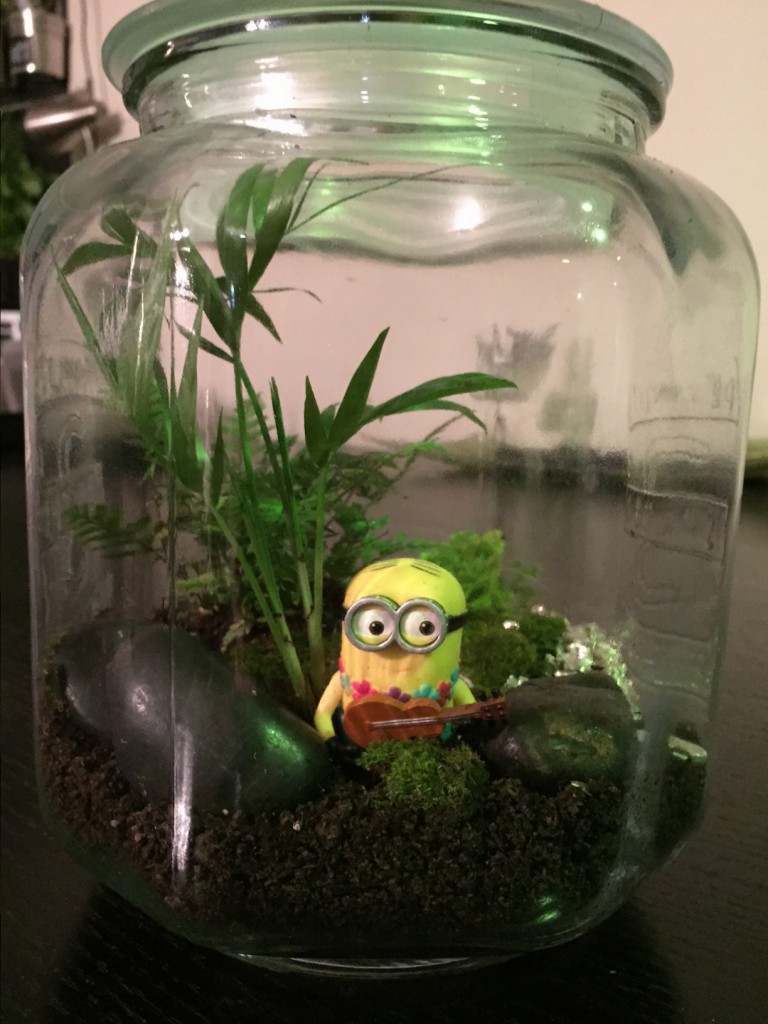 Build a terrarium, #110 on my list. I call it “It is a mad world in Minion paradise”

I even attempted to work a couple of days in the midst of the ick. It wasn’t very pretty, but I was there! Physically, mentally…

I was worried they would cancel my oral surgery on Friday, when I called Thursday they said it would be ok. This made me happy, because I just didn’t have somewhere else in my schedule to fit in the surgery and recovery (somehow I seem to be a busy girl). Plus we did the shot… oy!

Friday I woke up and got ready. My mom picked me up and told me I looked as lovely as I felt (I am sure I did). We went to go see my oral surgeon who went over the procedure – he was going to remove the exposed dead bone in my mouth. He was not going to lift any gums, but was going to drill out any exposed dead bone left in the area where the ONJ and the hole was. I was on the same page and we went ahead with the procedure.

The rest I don’t remember because of versed. Yay versed. My mom says she told me a few things four times. Yay versed.

My mom got me home safe and sound where Mike was waiting for me. She ran off and got a bunch of soft foods to stock my fridge (ice cream, popsicles, jello, pudding, soup…!) you would think I just had my tonsils removed rather than a chunk of my jaw eh?

I zonked out in bed watching a playlist on Netflix I had made based on friends recommendations.

My jaw seems to be healing pretty fast. Pain today feels better than yesterday. I imagine I will be in great shape by next week. I am so hopeful that this actually works and I won’t have a hole in my mouth anymore. It will be amazing! I have been wavering between levels of active infection in my mouth with that hole. I have been on constant antibiotics and had twice daily mouth rinses with some less than tasty mouthwash for over 4 months. Cross your fingers and your toes for me!