Home » Life » Enjoy the Ride and Eat Some Cookies 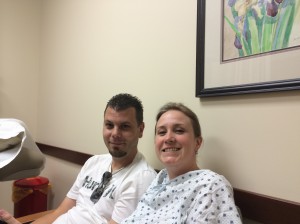 Mike and I waiting for the CT results. We look sooo excited. My dad took the photo.

Today was the latest version of the lung nodule saga. The 3rd in the series of CTs that started in September. When I got to my oncology appointment they didn’t have the scan results yet. They got them pushed through, so they looked a tad bit rushed – but what the ultimate result was – there wasn’t a major change. Which was actually less scary than consistent growth (I think? I would consult Dr. Google, but we are avoiding each other right now). This is still a whole lot of no answers, but better than anticipated. My oncologist didn’t get wildly excited about the lack of growth, but didn’t get wildly unexcited about it either. Her poker face is goooood or I don’t read it well when I just don’t know how to react. She was also being pretty silly, which was entertaining.

I was honestly hoping to biopsy the stupid things soon (but I do prefer that they aren’t growing either). My oncologist had told me last time to not expect anything to happen from this appointment, but that won’t stop me from building up grandiose biopsy schemes that won’t actually make it to fruition… (sheesh, way to set realistic expectations).

I had one of the nodules bigger in my mind (I had to reread one of the old labs, it kept repeating 7 because that was the group of images, but the nodule was 5.4 mm, not 7 mm). They have a new system where I can log in and get all of my labs rather than getting them emailed one at a time (there appears to be a delay at them showing up though, so the newest one isn’t in there – so no checking ahead of time).

We spent a chunk of time scrolling through my lungs. We could scroll through the September scan, January scan and today’s scan comparing the nodules (all scans at the exact same time). Technology these days is craaaaazzzy. The nodules looked a little bigger than January, they were definitely bigger than September – but the recent image was a much crisper image than January’s. My oncologist went back and forth on having the radiologist measure them more carefully, but I guess the reality was – if they did grow, it was just a teensy weensy lil’ bit and it wasn’t going to make world of difference in what was going to happen next…

My oncologist joked around about who was the trouble-maker that ordered the scan that started all of this headache (because they hate these scenarios, I hate this scenario, I get it, this is crazy). She also said that if they are cancer, it is growing very slowly and would have a long long time ahead of me, a chunk of time before these even became problematic (I believe the word was decades).

So what that does for me at this point is takes away some of the sense of panic and immediacy I was feeling (the need to solve this RIGHT NOW). Really what I wanted most was time, and it sounds like I have a lot of that right now. For that I am thankful.

Do we have any clue if it is cancer? No. Will the Pulmonologist biopsy yet? Nope.

I have to have 2 years of no growth on CTs to get the “all clear” so I guess I will just hang on, enjoy the ride and eat some cookies. 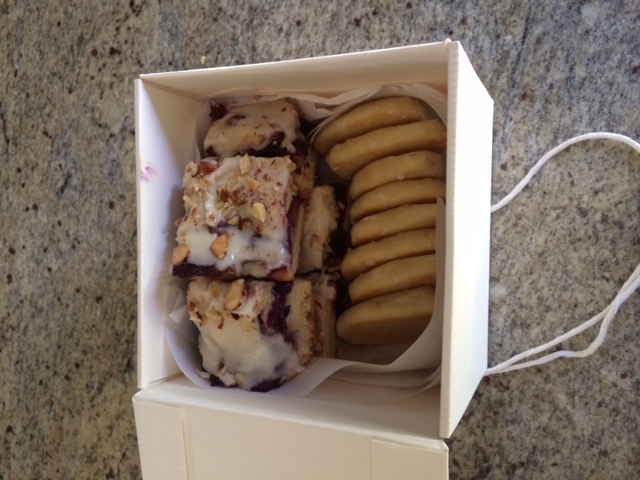 Noms from Kaz who cookie-bombed us after we got home.

Next scan is September 30..