Pink Ribbon for You, and One for You

Home » Life » Pink Ribbon for You, and One for You

This weekend was my trip to the Susan G. Komen World Race. I didn’t really fully know what to expect from the trip, but I wanted to keep an open mind, not that I was entirely closed minded about Komen. I have just never been the pink ribbon wearing survivor type. I think they were expecting me to be a WHOLE lot funnier in person… Little do they know, I am really shy (somehow everyone that knows me tells me I am a liar when I say I am shy, but seriously, it takes me a moment or 10, when you throw me in a situation for me to get my bearings and decide just how noisy I am going to be). I really enjoyed my time with the bloggers and Komen team, but it was emotionally exhausting at the same time, thus the delay in a post about it. There were a variety of women with various backgrounds blogging about a variety of topics, but everyone had ties to breast cancer one way or another.

Our day officially began Friday with lunch and a goodie bag (I now own the blingiest water bottle ever, the problem with a blingy water bottle is you have to hand wash the darn thing so you don’t lose the bling – cute, yay, practical, nay, but I likes it). We settled in, munched on some food and introduced each other. I then realized I am apparently the only human being without a business card for my blog (you need a business card for your blog? Now I am going to get business cards made, two big lemons one side and on the other side my title will be “The Elemonater” or “Chief Lemon Juicer” or something completely random… because I am classy like that).

We started out the day learning about how Komen decides to invest the money they raise, and why it varies from place to place. When you have a lot of money coming in, you have to figure out the correct way to have it going out (which is actually a fairly complicated process, that involves a network of volunteers who help decide who gets grants – and doctors who decide who gets the research dollars). What I didn’t know was that 75% of the money from local races stay in the community going to local organizations (I knew local organizations got grants from Komen because I know of a few organizations that I love and support in Utah that get grants from Komen, some I didn’t know got grants from Komen, until they told me in random conversation). 25% goes back to the mother ship. Salaries and running Komen actually come from corporate sponsors, not individual donors, so when you give money to Komen – it supports organizations and research. We also learned that in some groups and some areas, awareness does still matter.

They spent a GOOD amount of time talking about grants and funding of metastatic research. Komen does not do research themselves, but they do fund researchers. They discussed their process and we met a couple of amazing doctors that are involved. I almost felt like someone read my blog post about wanting to know what Komen was doing about metastatic disease… 😉 or they are mind readers, or they know that some of us worry about these kinds of things. I will go more in depth on the story here, but I will tell you I walked away feeling like I did meet some strong advocates for the metastatic patient, I heard the CEO, the founder and every person utter that they care, have a long way to go, but are working on the world of mets is a start. The quote of the day for me on this was: “40,000 women a year are dying from breast cancer. Mission is not accomplished.” – Dr. Neil Spector, MD

We met a couple of grantees including the D.C. Pink Divas. After a day of discussions we had dinner and were joined by Dr. Judith Salerno (@Judy_KomenCEO) the CEO, celebrating 9 months as CEO and a morning where she was interviewed sans makeup (she wasn’t expecting an interview) while reviewing the race setup. She told us she had a speech prepared, set it down, and just said she wanted to chat. She had a real heart to heart with us about the organization, who they are and what they do. Not too long after we were joined by Nancy Brinker and her son Eric Brinker. It was quite entertaining watching the two banter which involved breast forms, headless polo’s on polo cologne and Nancy’s wig ending up on the dog.

The surprised us with some New Balance #laceup365 shoes and shirts and gear for the race the next day (we were signed up and given the option to run/walk if we wanted to). Most of us decided we would go for it!

Once the race was about to start we all managed to get separated. Sam Shuerman and Rene of Good Enough Mother  were my entertaining walking buddies. We found out what happens when you let Rene out of the house, this is what happens when you let Rene out (she had me in fits of giggles all weekend, she called Sam and I her “pint sized beauties” all weekend, Sam and I are both remarkably short): 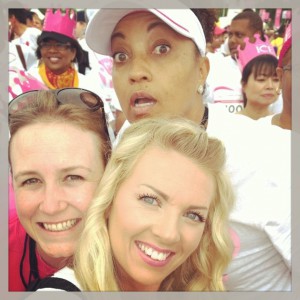 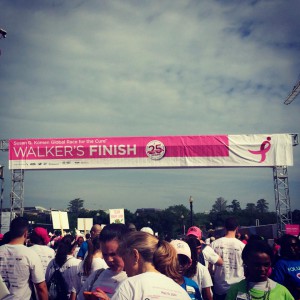 Sam’s vlog about race day (with me being camera shy):

I shared other photos on my Facebook page here.

All in all, it was a great weekend. I had a lot of fun! I am still processing everything. I am also in that weird place with my scan coming up in two weeks. I am trying to remain calm, collected and normal, but hey – I have never been “normal” so… whatever. One day at a time folks. One day at a time.

Oh… while I was gone some of my herbs died in the herb garden I created out of Ikea goodies. Mike felt bad and replaced the dead ones hoping I wouldn’t notice. It was cute, but ummm four sprouts became a bush and I had three times the parsley when I got home. Teehheeee. Cracks me up, love that dude, he knows I love my goofy little garden. 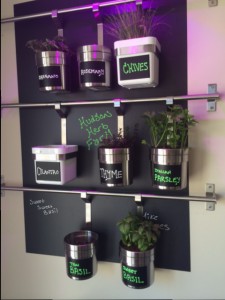