Home » Life » Angelina Jolie, a Deep Breath and Life as I Know It

Angelina Jolie, a Deep Breath and Life as I Know It

A friend remarked on why I hadn’t responded on the Angelina Jolie “thing” on my blog. I explained that I had a lot of emotions and opinions on the matter and thought I should just keep my mouth shut. That friend disagreed and felt that reasonable people (apparently he thinks I am reasonable, hilarious…) should add their voice to the various crazed responses to a very personal choice of a very famous and beautiful woman.

Apparently, I have Facebook friends, that have friends, that are a bit crude, that made some joking statements along the lines of “oh no! Brad Pitt lost his boobs.”  Which just made me land in a weird place of questioning whether or not my husband lost “his” boobs. *sigh*

People were mostly joking, but it hit me the wrong way. I had to step back a moment and shed a few tears. Just… wow… I had a bilateral mastectomy (which means one of those “home girls” didn’t necessarily have to go, but she did, and I am glad she did even though she gave me soooooo much trouble – apparently it is a “she” now).

I honestly think what Angelina did was pretty reasonable, and I had a deep respect that a woman who makes a living off of her looks (and talents) was willing to make a personal choice like that public.

I would have done the same in Angelina’s shoes . I patiently waited for my own BRCA1 and BRCA2 tests, because the ovaries were going to take a hike if it came up positive, which it didn’t, but not having the results yet, made me still go ahead with a bilateral or as they call Angelina’s surgery a “double”). I don’t regret it, still sad it happened, glad I have had reconstruction, but I am glad they are gone.

Speaking of genetic tests, I am, in fact, going to get the BART test, which is a newer addition to the BRCA1 and BRCA2 testing to help identify if the ovaries could be problematic based on other genes they have identified…(still hoping I can truly enjoy some estrogen in a few years). Even if I have to scrape and save to pay for it. 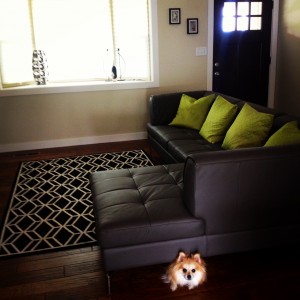 The dog loves to be under couches (in the new house)

Related to estrogen, my oncologist and my gynecologist discussed and decided that the benefits of the Mirena IUD likely outweighed the small addition of a minor amount of progesterone to my body. So, I have decidedly upgraded that (not many options out there without hormones). So far so good.

I had my quarterly check-up recently (it sort of crept up on me again). All was well, I am not too crazy (this week) and no strange bumpy lumps showing up.

P.S. We are mostly settled in the new house and looooooove it. So much fun having a fresh start and a new beginning. It was an interesting month of me traveling to New York, New Orleans, back for a week to move and then off to San Francisco. Whew!.