Home » Life » What a Beautiful Weekend

What a Beautiful Weekend 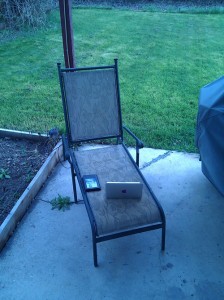 For those worried about my last post, I promise, I am doing better. The sunshine certainly helps! So does my husband, family, friends and fellow cancer fighting ninjas.

Saturday was so amazingly lovely. Mike was putting in every effort to cheer me up, knowing that we really don’t know what is going to happen until Monday. My temperature was normal throughout the day. The highest it reached was 99.1, which I can’t technically call a fever. I did develop a bit of a sore throat in the evening (the possible blame for a fever?), and a runny nose on Sunday, so maybe I am just sick. I won’t get false hopes up though.

Saturday I also woke up chemo side effect free (it is really strange how I just wake up and BAM! Normal. I won’t complain though, I think I am lucky that I get days where I don’t feel the chemo at all). After making me breakfast Mike got me out of the house to go get some much needed groceries, and some goods to barbecue some burgers. We had a couple of friends over and had huge burgers topped with sauteed mushrooms and onions (don’t worry, I had a spinach salad with mine, still getting that healthy stuff in there). Mike and I stayed up watching movies and relaxing.

Today is chore day, so we (meaning mostly Mike) got the house scrubbed and I made cinnamon vanilla french toast with bananas (on mine) and bacon. I was able to get some work squared away and then parked my butt outside on the Mandi chair of happiness (my lounge chair). I have been catching the sunshine when it comes out and reading a book on my Kindle. 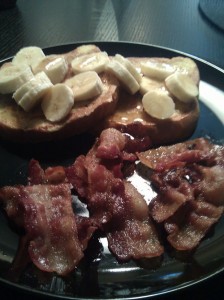 I have come to accept the fact that if I have to have surgery I have to have surgery… The reason I have been so against it is because it adds 2-3 MORE surgeries for me this year. One to get it out, one to get it back in, and I have to have the extra heinous reconstruction done on both sides rather than just the radiated side. I am really starting to rethink my early decision to get reconstruction, but for personal reasons have a hard time giving it up too. The reason the doctor would take out the expander is that if I have an infection, because I am imunocompromised, I have a high likelihood of getting sepsis (your body taken over my a bacterial infection) which comes with a high chance of death. So… a few more surgeries or death. I guess I should stop being such a pain in the butt about having surgery. I have some other theories about what is going on, which I am going to pose to the doctor, but if he ultimately decides I am in danger I need to do what he says..