Home » Life » The Adventures of Being Drain Free

The Adventures of Being Drain Free 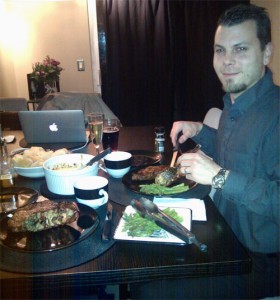 Look at that spread! Dinner and a handsome man, Valentine's Day couldn't be better.

I got my final drain out Monday the 14th of February (a.k.a. Valentines Day). I was a bad breast cancer patient, I went in without an appointment or approval to come in. I really wanted to get the drain out. I had meetings pretty much every second of the day, so I figured I could possibly pull off getting the drain out if I went in early. No appointment meant a long wait (which was my own fault), and made me late for meetings, but getting that final drain out really seemed worth it (hopefully the nurses forgive me for making their busy day busier).

I wanted to be able to sit next to Mike without jumping every time he moved. Since the drains have been in we really haven’t sat super close to each other because accidentally snagging one of those suckers is not one of my favorite things in the world, and it is easier to have an 8 pound dog snag one on accident than your much heavier, but super skinny, husband.

I have had an interesting weekend with my left side where I felt like I was getting swollen every afternoon all weekend (and was a bit miserable). This was an incredibly uncomfortable sensation, but kept trying to convince myself that it was normal. I forgot to mention it when I was getting my drain out as everything was a bit rushed, but called in Monday afternoon because I couldn’t put my left arm down all of the way without bumping into swollen tissue, and it was pretty uncomfortable. I felt weird walking around with my arm sticking out funny.

When I spoke to the nurse I was told that it was normal, but not preferable. They could drain it with a needle but preferred to have it go away naturally. I still had plenty of antibiotics and had read to put pressure on it to see if my body would go ahead an absorb the excess fluid (so maybe I had the other drain out early or I had fluid hiding that it didn’t catch, I am not sure). I think I will maybe take my time on getting the annoying things out next time just in case (which seems slightly funny when you consider how much I was pushing to get that other drain out).

The drains were almost better than this swollen feeling (which is why I have decided women are given a compression bra rather than drains after a “by choice” breast augmentation). I am wrapped up in an ace bandage to put pressure on the area to try to get my body to absorb it (which is also much more comfortable strangely enough, it moved the excess fluid away from my incision). Looking at the hospital bills, I am going to have the Rolls Royce boob job when this is all over, considering the price different between what I am doing and a high priced boob job (I am guesstimating that it will run about $200k+ for just the operations, hospital stays etc. for the breast surgery and reconstruction).

One of my surgical incisions started to ooze after my shower today. It seems that the surgical glue must be gone in that area and that the wound hasn’t healed all of the way through (which could make expansion this week interesting). I called the nurses again (good thing they are such patient caring souls) and they let me know that this is something that can be normal. I think I am getting slightly paranoid about this part of the healing process. Last week I felt like a million bucks, this week I keep having little things creeping up on me and stressing me out! I have a week and a half to get as healed up as possible for chemo, so I think I keep hoping my body is completely healed so that I don’t have to worry about more problems when I am in chemo.

Steak and lobster before they met the lean mean Mike grilling machine.

Mike and I did the whole “eat out” thing for Valentine’s Day years ago and were really over the concept of going all out for Valentine’s before we got married. We have found that we can really have a pretty decent and pretty darn delicious meal by spending the evening cooking at home (which makes a fun date of its own). Harmon’s had a deal on “surf n’ turf” so I got two lobster tails and two good steaks for a deal and a squeal. I made some spinach and artichoke dip and steamed asparagus to go with it. We spent the evening cooking together and it was nice and relaxing. The holiday was a nice excuse to take some time and spend it together.

I have resolved to eat every single one of my favorite dishes this week before I go into chemo (it typically causes everything to start tasting like metal). Mike and I started that tradition with lobster for Valentine’s and will be moving on to cook all of the good stuff over the next week. We are also going to go to Franck’s (my favorite restaurant) and enjoy a nice dinner out the Wednesday before chemo. 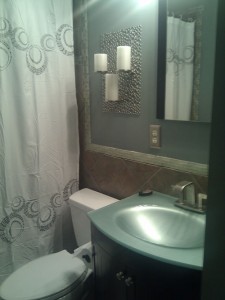 Before the glass trim was grouted, but you get the idea.

Brady, Mike and my stepdad Steve have made amazing progress on the bathroom (mom is still not feeling well 🙁 ). It is almost done! Almost…! There are some  final touch ups (grout and seal in the shower, trim, touching up paint etc.), but we have had a working toilet and sink for several days now! I should have a bathtub for taking baths and relaxing before I am allowed to take baths! Yay! Not to mention my super cool remote controlled electric candles above the toilet..